You have reached the cached page for https://www.dailymail.co.uk/tvshowbiz/article-10167619/He-revelled-flamboyance-CHRISTOPHER-STEVENS-bids-farewell-Lionel-Blair-died-aged-92.html
Below is a snapshot of the Web page as it appeared on 1/18/2022 (the last time our crawler visited it). This is the version of the page that was used for ranking your search results. The page may have changed since we last cached it. To see what might have changed (without the highlights), go to the current page.
You searched for: +who is andrew stevens and what does he do for you quotes We have highlighted matching words that appear in the page below.
Bing is not responsible for the content of this page.
He revelled in his flamboyance: CHRISTOPHER STEVENS bids farewell to Lionel Blair, who died aged 92  | Daily Mail Online

The campest straight man in showbiz: He revelled in his flamboyance... and his wife and family helped him become one of our most loved entertainers. CHRISTOPHER STEVENS bids farewell to Lionel Blair, who has died aged 92

By Christopher Stevens for the Daily Mail

Madly flamboyant, Lionel Blair was already a veteran showbiz trouper when even The Beatles were young.

Fans of the Fab Four discovered him in 1964 when he played the tetchy choreographer driven to distraction in A Hard Day’s Night.

But the actor, presenter and song-and-dance man — who died today at the age of 92 — had been around for a couple of decades before that.

He and his sister Joyce were regulars at London’s famous Windmill Theatre in the 1950s where Lionel helped Bruce Forsyth settle in. Incredibly, Brucie’s mentor was still twinkle-toed and hard at work until the start of the pandemic.

He was a regular on Loose Women, The One Show and This Morning, always with that brilliant smile, bouffant hair and nifty patter of feet. 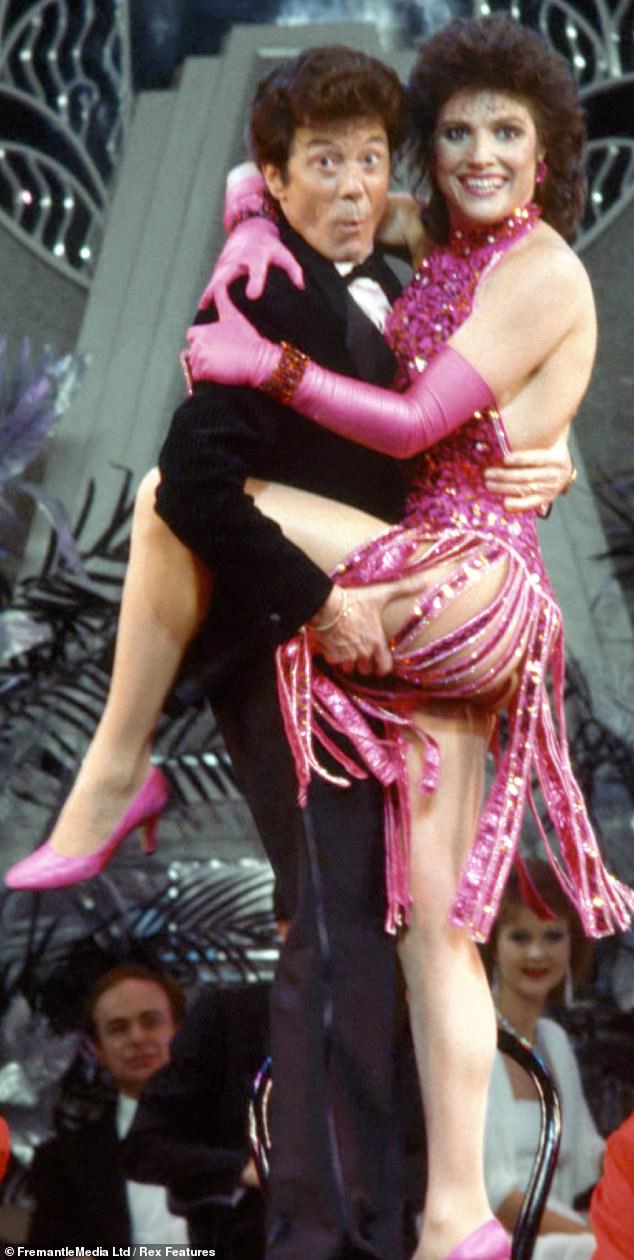 Lionel Blair, who had died at the age of 92, dancing with Suzanne Danielle on the Morecambe and Wise Show

When he appeared on BBC1’s The Real Marigold Hotel in 2017, tasting life as a retiree in Kerala, India, he was filmed arriving at Kochi Airport doing a softshoe shuffle.

‘Welcome to India!’ he chuckled, to the bemusement of the locals who thought they should be welcoming him. That summed Lionel up he always brought the party with him.

He was born Henry Lionel Ogus in Canada in 1928 and, from the age of two, was brought up in Stamford Hill, North London, the son of a Jewish barber whose parents had been Russian refugees.

His father died when he was 13, which forced him, he said, to grow young.

‘I’d started work as a boy actor and my dad had been thrilled about that, but I became too old for little-boy parts and too young for grown-up parts. I could dance so I got into musicals and started performing with [sister] Joyce.’ 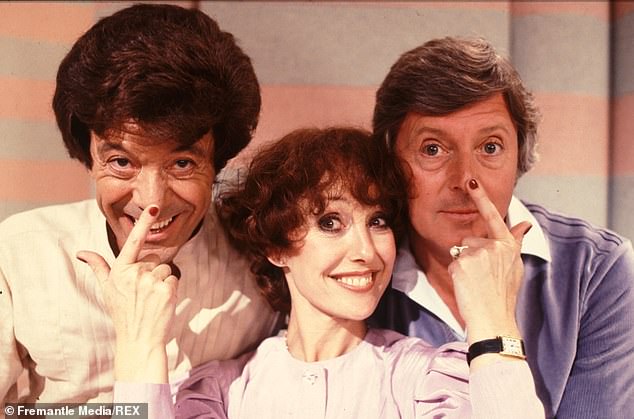 After falling in love with the stage, while playing a Munchkin in The Wizard Of Oz in Croydon aged ten, he landed a place at the Shakespeare Theatre in Stratford-upon-Avon in 1944.

But after the war, competition was fierce, work was irregular and his natural talent was for dance.

So, in 1947, he adopted his stage name and began working in West End variety shows. The early years were tough. His mother died, ‘so we were orphans’.

Then Joyce married, and the double act — based on routines created by Fred Astaire and his sister Adele — became a solo career.

By his early 20s, thanks to a ferocious work ethic, Lionel had his own troupe, Lionel Blair And His Dancers. They appeared regularly on such TV shows as Harry Secombe And Friends and Saturday Spectacular, and he trained Una Stubbs.

He was a regular on family shows from Sunday Night At The Palladium and Big Night Out, to Frost On Sunday and The Benny Hill Show. But he still itched to be an actor.

After marrying Susan in 1967, he told her he was ready to stop dancing — he wanted to be taken seriously, he said.

‘She said that was fine but the house and our lifestyle would have to go, too. I soon realised how fortunate I was,’ he later recalled.

The couple had three children and for all his showbiz triumphs, Lionel always said his family was the real success of his life.

‘For me, everything comes back to family. We’ve got three grandchildren, and it’s heaven. I love them to distraction,’ he said.

But, at first, his children found it difficult to have a famous father. His camp persona led to teasing at school, and eventually Lionel and Susan decided to send all three to a theatre school.

That changed everything. ‘There were kids there who were almost jealous because they [my kids] had a famous father,’ Blair said. 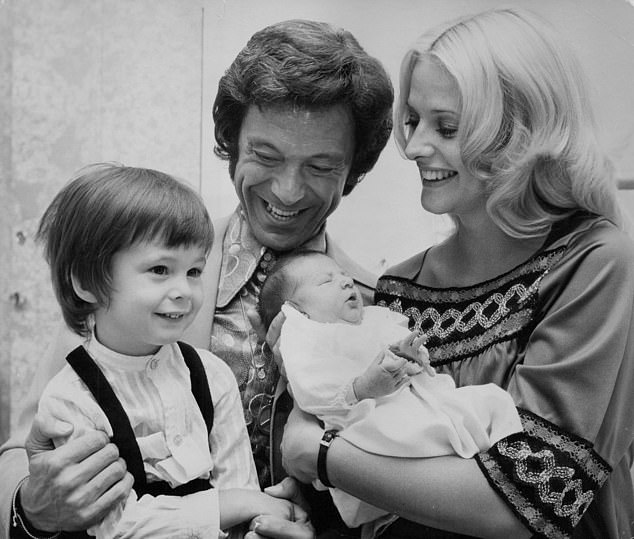 To his lasting regret, he never met the son he had before meeting Susan. A relationship with a dancer he never named (but referred to in interviews as ‘Katie’) broke up when she was five months pregnant.

After the baby boy was born, Blair was invited through a friend of Katie’s to come to the maternity hospital. He decided it would only cause him pain.

‘I knew that once I had seen him, I would never let him go,’ he said. He never saw Katie again.

She wrote to him once at the Palladium, he said — but a cleaner threw the letter away before he had made a note of her new address.

It was, he said sadly, ‘a terrible thing’.

Till the end of his life, Lionel was frustrated that people refused to see him as anything but a light entertainer.

He was always in demand for game shows such as Give Us A Clue, the charades panel show — but not for his deeper talent. It was ‘terribly frustrating,’ he said.

‘I can act. I could do the sort of roles Jack Lemmon does. And Alan Rickman. But I have become so well known as a dancer I am not allowed to do other things’.

He was particularly irritated by the weekly teasing on Radio 4’s I’m Sorry, I Haven’t A Clue, where presenter Humphrey Lyttelton and co delighted in making double entendres about his charades.

A typical joke imagined ‘Lionel Blair and Una Stubbs doing All Kinds Of Everything against the clock’.

But he never tried to tone down his exuberance. ‘I can’t help being effusive,’ he protested.

His great indulgence was for designer clothes. Susan did not allow him to have a cheque book or a credit card, he claimed, because he would spend all their money on his wardrobe.

And he happily admitted to being vain, refusing to divulge his age. His children were discouraged from calling him Dad in public, and his grandchildren referred to him as Lionel, never Grandad.

‘I don’t mind getting old,’ he told the Mail in 1994, ‘as long as I can carry on looking good. I’ve already had my nose done. When I have to have nips and tucks, I will.’

To the end, he sported a magnificent head of dark hair.

‘It is so springy, too springy,’ he would say, patting it down. The hair always bounced back ... just like Lionel.

He revelled in his flamboyance: CHRISTOPHER STEVENS bids farewell to Lionel Blair, who died aged 92