You have reached the cached page for https://michaelnontonmulu.blogspot.com/2017/02/journey-to-west-demons-strike-back.html
Below is a snapshot of the Web page as it appeared on 3/19/2021 (the last time our crawler visited it). This is the version of the page that was used for ranking your search results. The page may have changed since we last cached it. To see what might have changed (without the highlights), go to the current page.
You searched for: +who directed journey to west demons strike back online We have highlighted matching words that appear in the page below.
Bing is not responsible for the content of this page.
Mike's Movie Moments: Journey To The West: The Demons Strike Back - Sequel to Great Comedy Interpretation of the Famous Chinese Literature

Journey To The West: The Demons Strike Back - Sequel to Great Comedy Interpretation of the Famous Chinese Literature 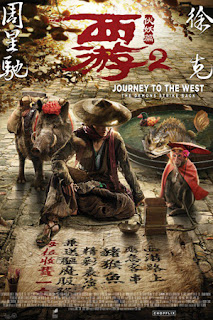 Few weeks ago, I saw in the various websites about this movie going to play in Indonesian cinemas sometime in February 2017. When I saw the very brief synopsis that it was a sequel to a Stephen Chow's movie, I immediately told my wife that we got to see this one. Lucky for us, the original movie was available through online streaming, so we could see it first before we watch the sequel (thanks to her who managed to find it). Well let us get on to the movie now.

The movie started with Monk Tang Seng (Kris Wu - xXx: Return of Xander Cage) who during his journey to the West had to endure the hardship and make some money by providing "show" in the circus which involved his three disciples who were actually demons that he captured earlier. The eldest was the mischievous rebellious Monkey King: Sun Wukong (Lin Gengxin - brief role in The Great Wall and God of War, Zhao Yun TV series). The second was the pig demon who adored and loved women, Zhu Bajie (played by Duo Wang in demon shape and Yang Yiwei in human shape). And lastly the water demon Sha Wujing (Mengke Bateer).


After some chaos caused by Sun Wukong when he was constantly called bad monkey by Monk Tang, the four of them had no choice but to leave the circus. Sun Wukong who was feeling unappreciative from Monk Tang was always trying to find ways to fight him. Only problem for him was whenever Monk Tang started to sing some prayer song, his body could not stop from dancing to the song. Furthermore, he was always afraid of the Buddha palm which would hurt him a lot.

When Monk Tang and his disciples continued their journey, they finally reached a city where the palace people led by the Taoist (Chen Yao - Monster Hunt) greeted all of them and invited them to the palace. However, the king had a very strange like pampered child character and immediately instructed Monk Tang to do some entertainment before they were allowed to leave the city. Things also got complicated when Monk Tang saw 1 of the king's concubines named Felicity (Jelly Lin - The Mermaid) who reminded her a lot about his first love Duan (Shu Qi).

Could Monk Tang find the way to entertain the king and continue their journey? What would Monk Tang do with Felicity who seemed to be making him doubt his Buddha beliefs? Would Sun Wukong be able to fight the struggle inside him on whether to fight his teacher and be free, or to help him with the journey? Find all the answers to this exciting comedy adventure movie.

After watching this movie, I could not help but feel that though the movie was good, it was not as good as the first one. I got to admit that there were still a lot of funny moments (especially involving Zhu Bajie and also Sha Wujing when he transformed into his fish demon shape) and the action sequence were cool, especially the final fight scenes. However, the more serious & touching moments felt were more spot on in the original movie (titled Journey To The West: Conquering The Demons) and I also felt that the action seemed to be the main focus in here. I think this has got to do with the fact that the sequel was no longer directed by Stephen Chow (though he did write for this one), but by Tsui Hark who was famous for making very cool action movies such as A Better Tomorrow (Chow Yun Fat), Once Upon A Time in China (Jet Li) or the newer fantasy action movies like The Legend of Zu.

The main story of the journey to the West were told in a very comedic way and there were a lot of crazy absurd moments a la Stephen Chow just like the original movie. People watching this movie had to forget about the seriousness portrayed in the TV series back in 1987-1988 which was following quite closely to the novel written by Wu Cheng'en. Instead of seeing the very serious Monk, we would see a more playful and young monk characterized by Kris Wu. For information, in this sequel, all 4 main characters were different from the original movie. Only Monk Tang's master was the same, and brief appearance of Shu Qi who was the lead character in first movie.

I also noticed that there were some scenes which would seem cool if it was shown in 3D. We should also be able to enjoy the Dolby Atmos or Dolby 11.1 sound system according to the end credit scene. However in Indonesia, there was neither 3D option nor those cool sound effects options. I am not sure the reason. By the way, there was a funny post end credit scene after the show, which would be interesting to see. It was indeed a creative way to end a comedy movie.

So if you are looking for a comedy interpretation of a well known Chinese literature, then this movie is definitely for you. But if you are unable to appreciate absurd slapstick humor, then there is possibility you would not be able to enjoy this one. For those who believed that such serious literature should not be made into a very comedic movie, then it is going to be challenging to enjoy the movie. The choice is yours.

I never claim to be a professional movie critic. This blog only represent my personal view and movie experience. It is not meant to be a truly smart analysis of the feature of the films like script, musical score, acting, directing or any such things, though at certain times I might provide my comments on those aspects. If you are looking for any of that stuff in every post, other blogs may suit you better.