You have reached the cached page for https://www.amazon.in/Tom-Jerry-Nutcracker-Hanna-Barbera/dp/B00DDTC54O
Below is a snapshot of the Web page as it appeared on 10/11/2020 (the last time our crawler visited it). This is the version of the page that was used for ranking your search results. The page may have changed since we last cached it. To see what might have changed (without the highlights), go to the current page.
You searched for: +who bought hanna-barbera toys We have highlighted matching words that appear in the page below.
Bing is not responsible for the content of this page.
Tom and Jerry: A Nutcracker Tale: Amazon.in: Hanna Barbera: Movies & TV Shows 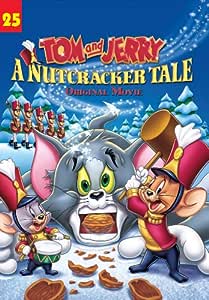 Tom and Jerry: A Nutcracker Tale

Hanna Barbera (Director) Rated: U (Universal) Format: DVD
4.7 out of 5 stars 4 ratings
Currently unavailable.
We don't know when or if this item will be back in stock.

Tom And Jerry: A Nutcracker Tale is an animated film that was directed by Spike Brandt and Tony Cervone. The movie casts the highly popular Tom (the cat) and Jerry (the mouse) as the two leading characters. Tchaikovsky's popular ballet number ‘The Nutcracker' is used to some good extent as the background music in the film. This latest movie on Tom and Jerry is primarily dedicated to Joseph Barbera, who died in the year 2006.

The Spike Brandt film revolves around Jerry and his magical kingdom of toys, which magically come to life. One winter day, Jerry enjoys a feast with his toy-friends, which seems to be going rather well. Tom, the Captain of the Cat Guard, comes to know about this feast and deliberately attacks Jerry and his mates with his forces to trap the toys. Tom captures the Ballerina and takes her to the Cat King. In the meantime, Tom compels his army to stop Jerry. However, Jerry has other plans. He takes the company of Paulie and Nelly to follow the guiding star and find the Toy Maker.

Tom And Jerry: A Nutcracker Tale by Spike Brandt was released in the year 2013 by Warner Bros. The movie is available in DVD format with a run time of 46 minutes and has a rating of U.

4.7 out of 5 stars
4.7 out of 5
4 global ratings
How are ratings calculated?
To calculate the overall star rating and percentage breakdown by star, we don’t use a simple average. Instead, our system considers things like how recent a review is and if the reviewer bought the item on Amazon. It also analyses reviews to verify trustworthiness.

Srikar
4.0 out of 5 stars A Pretty Good DVD Release.
Reviewed in India on 21 June 2017
Verified Purchase
This review is for the DVD of "Tom and Jerry: A Nutcracker Tale". It is a single-disc version. The video quality is excellent. It is presented in 4:3 Aspect Ratio, as opposed to its Original 16:9 Aspect Ratio.

Avi
5.0 out of 5 stars Best for child
Reviewed in India on 1 July 2016
Verified Purchase
Very much childish not for all age group.
Read more
Helpful
Comment Report abuse
See all reviews
Unlimited FREE fast delivery, video streaming & more
Prime members enjoy unlimited free, fast delivery on eligible items, video streaming, ad-free music, exclusive access to deals & more.
> Get started
Back to top
Get to Know Us
Connect with Us
Make Money with Us
Let Us Help You
EnglishChoose a language for shopping.
© 1996-2020, Amazon.com, Inc. or its affiliates