You have reached the cached page for https://issuu.com/czechfilmcenter/docs/cfc_03_2017_06/4
Below is a snapshot of the Web page as it appeared on 9/29/2021 (the last time our crawler visited it). This is the version of the page that was used for ranking your search results. The page may have changed since we last cached it. To see what might have changed (without the highlights), go to the current page.
You searched for: +which is the grand prize of the czech film festival 2017 We have highlighted matching words that appear in the page below.
Bing is not responsible for the content of this page.
CZECH FILM / Fall 2017 by Czech Film Center - Issuu 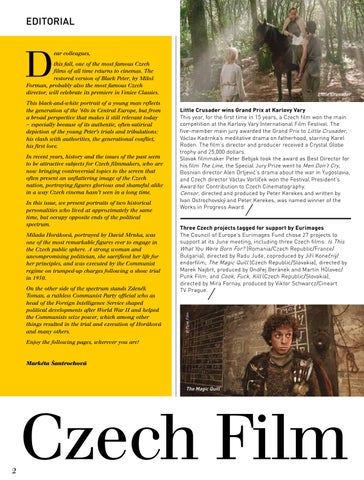 This black-and-white portrait of a young man reflects the generation of the ’60s in Central Europe, but from a broad perspective that makes it still relevant today — especially because of its authentic, often-satirical depiction of the young Peter’s trials and tribulations: his clash with authorities, the generational conflict, his first love. In recent years, history and the issues of the past seem to be attractive subjects for Czech filmmakers, who are now bringing controversial topics to the screen that often present an unflattering image of the Czech nation, portraying figures glorious and shameful alike in a way Czech cinema hasn’t seen in a long time. In this issue, we present portraits of two historical personalities who lived at approximately the same time, but occupy opposite ends of the political spectrum. Milada Horáková, portrayed by David Mrnka, was one of the most remarkable figures ever to engage in the Czech public sphere. A strong woman and uncompromising politician, she sacrificed her life for her principles, and was executed by the Communist regime on trumped-up charges following a show trial in 1950. On the other side of the spectrum stands Zdeněk Toman, a ruthless Communist Party official who as head of the Foreign Intelligence Service shaped political developments after World War II and helped the Communists seize power, which among other things resulted in the trial and execution of Horáková and many others.

Enjoy the following pages, wherever you are! 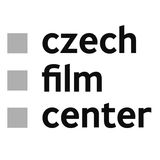