You have reached the cached page for https://theculturetrip.com/europe/united-kingdom/england/london/articles/escape-the-city-londons-natural-green-spaces-parks/
Below is a snapshot of the Web page as it appeared on 1/6/2021 (the last time our crawler visited it). This is the version of the page that was used for ranking your search results. The page may have changed since we last cached it. To see what might have changed (without the highlights), go to the current page.
You searched for: +where is richmond palace england We have highlighted matching words that appear in the page below.
Bing is not responsible for the content of this page.
London's Natural Green Spaces and Parks 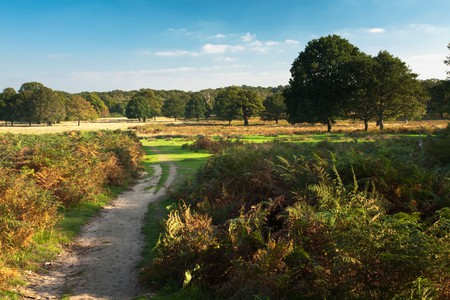 London’s parks and green spaces have always been immensely popular with tourists and locals alike regularly flocking to the green spaces to get some fresh air. From hidden squares surrounded by townhouses, to the pleasant, cultivated Royal Parks and the gentle rolling hills, London is actually one of the world’s greenest cities. Here, Culture Trip explores the best natural spaces offered in the city.

The Royal Parks of Zone 1

London may be one of Europe’s biggest cities, but it’s also surprisingly green, even right in its centre. In Zone 1 alone, there are four Royal Parks – Hyde Park, Regent’s Park and Primrose Hill, St. James’s Park and Green Park. While their pristine and well-kept nature, combined with the constant stream of tourists and suit-wearing office workers, means they cannot entirely be called “natural”, Hyde Park and Regent’s Park especially are unexpectedly large and can lure even the most avid city-dweller into thinking they’re on a country walk. Ideal for lunch breaks away from the office and lazy afternoons on every other day, the Royal Parks are full of dog walkers, fitness enthusiasts and book readers, and they contain enough green space, footpaths and wooden benches to cater for all of these activities. Expect to find manicured flower beds, grassy fields, small lakes and plenty of ducks in London’s most famous parks.

Church, Park
Facebook
Email
Twitter
Pinterest
Copy link
Share
Map View
A moderately sized green space located in a largely nondescript part of Zone 2, bordered by brick estate buildings to the west and Stoke Newington’s gothic church spire to the east, Clissold Park is one of London’s best grassy spots, a fact often overlooked. Entering the park is a welcomed surprise – as well as being a vast green field, alive with small dogs and football-playing children, it also contains unexpected secrets. Deer, normally only associated with the much vaster Richmond Park, can be found in the park, as can a children’s paddling pool, a pond, a community vegetable garden and a tea room. The park is ultimately designed for local families, and the large numbers of mothers with pushchairs, dads with young sons and couples with dogs shows it’s being put to good use.
Open In Google Maps
Green Lanes, Stoke Newington, London, England, N16 9HJ, United Kingdom
+442083563000
Visit Website
Give us feedback 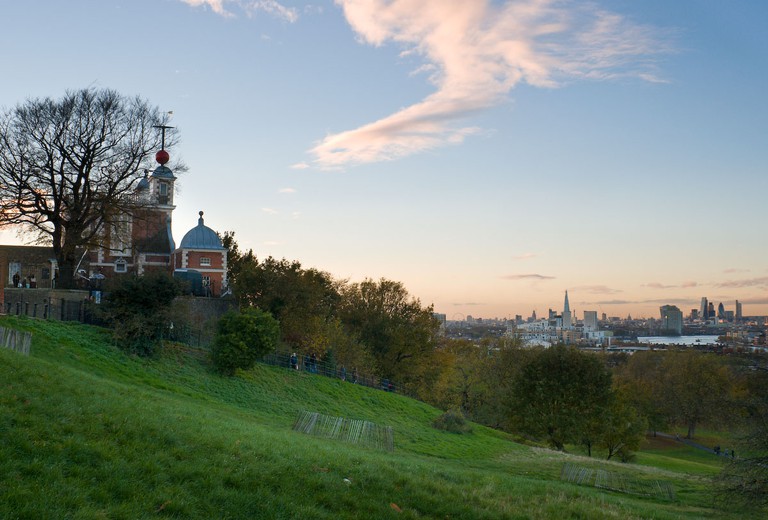 Courtesy of The Royal Parks
Where else can you simultaneously sunbathe on a vast expanse of green grass and admire the architecture of Canary Wharf but in Greenwich? Already radiating village charm, with its brick buildings and pie and mash shops, Greenwich is a magnet for those looking for a little bit of old English countryside without having to stray more than a stone’s throw from London’s city centre. Dotted with landmarks, Greenwich Park’s skyline is dominated by the famous observatory, which requires a gentle hill walk to reach it, and sprawling at the bottom of the slope is the equally famous and grand National Maritime Museum.
Open In Google Maps
Greenwich, London, England, SE10 8QY, United Kingdom
+443000612380
Visit Website
Give us feedback

Get off the bus at Hampstead Heath and you’ll feel a long way from the bustle of city life. Already one of London’s greenest, leafiest and most attractive suburbs, Hampstead is made extra special by the presence of the heath. Dense woodland, muddy fields and meandering dirt pathways all combine to make Hampstead Heath feel that bit wilder than London’s other parks – there probably aren’t many other places where Londoners can justify wearing wellington boots, after all! The centre of the Heath is perhaps one of the only places in London where the sound of traffic can no longer be heard. But the city is never too far away – stand at the top of the hill on a clear day, and you’ll be able to see as far as the Shard and the Square Mile.

Park
Facebook
Email
Twitter
Pinterest
Copy link
Share
Map View
With quaint brick buildings and traditional English bakeries, Highgate Village already feels like a different world from London, and its delightfully landscaped park, perched on the edge of a hill, only helps to reinforce the village lifestyle. Although far smaller than Hampstead Heath, its closest neighbour, Waterlow Park is situated adjacent to the High Street, making it a perfect place to pop into for a relaxing walk in between browsing charity bookshops or dining on hearty pub meals.
Open In Google Maps
Highgate Hill, Highgate, London, England, N6 5HD, United Kingdom
+442079745633
Visit Website
Give us feedback 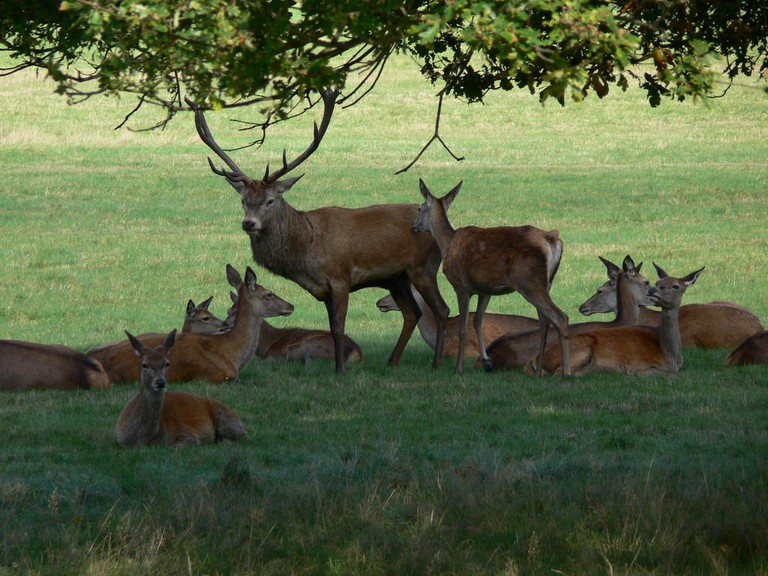 Courtesy of The Royal Parks / | © Su Hume
At around 10mi (16km) in diameter, Richmond Park is a true slice of the countryside within the borders of Greater London. Queen’s Road, running along the ridge between Kingston Gate to the south and Richmond Gate to the north, allows visitors to get a taste for the park without leaving the comfort of their car. But, straying a little further into the park, with its abundance of grassy plains, ancient oak trees and deer – appearing in their hundreds – is where Richmond Park begins to feel a little wild. The park’s most noteworthy attraction, other than its deer, which were brought in as hunting game for King Henry VIII, is King Henry’s Mound, from where an unobstructed view through to St Paul’s Cathedral in the City of London, around 10mi away, can be seen.
Open In Google Maps
Richmond, United Kingdom
+443000612200
Visit Website
Give us feedback

The Thames Path follows Britain’s most famous river for an impressive 184mi (135km) from its source in the Cotswold Hills all the way out to the Thames Barrier by the sea, passing not only through Central London but also through quaint villages, grassy parks and unspoilt countryside on its way. While no one is expecting you to complete the whole path – at least not in one go – the path’s accessibility from London means that a short train, bus or even boat ride can take you out to the bustling, restaurant-laden riverbank of Kingston; the pleasant serenity of Hampton Court Palace’s gardens; or the natural beauty of the Chiltern and Cotswold Hills.

Day trips out of London

Sometimes it seems like London’s suburbs and zones go on forever. However, what visitors to the city don’t often get to explore is the greener, calmer and altogether more natural environment outside of London. This starts with the Green Belt, a strip of land circling London on which building is highly restricted to protect the natural environment and ecology of the area. In this area, plenty of small villages and green forests can be explored – all reached in less than an hour by train from central London.

Venture just a little further away from the city and you can reach some surprisingly remote and beautiful areas. To the south, the North Downs, the Surrey Hills, and the South Downs, Britain’s newest National Park, are all reachable in less than two hours by train or car, making them ideal for day trips out to the countryside. To the west, the Chiltern Hills, an Area of Outstanding Natural Beauty, can also be reached by just a short train or car journey. Many people commute into the city from these areas daily, so transport connections are good, and small towns with plenty of amenities have built up around the areas, but their protected status prevents their natural beauty from being destroyed. 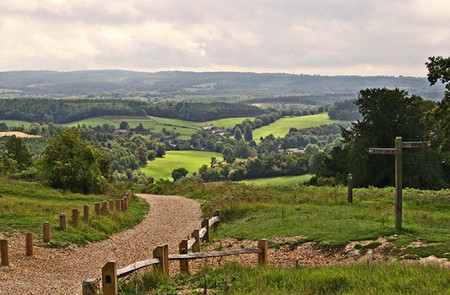 The North Downs Way at Newlands Corner, Surrey, just a short distance from the outskirts of London | © Richard Thomas / Geograph
Give us feedback

We and our partners use cookies to better understand your needs, improve performance and provide you with personalised content and advertisements. To allow us to provide a better and more tailored experience please click "OK"