listen); West Flemish: West Vloandern; French: (Province de) Flandre-Occidentale; German: Westflandern) is the westernmost province of the Flemish Region, also named Flanders, in Belgium. It borders (clockwise from the North) on the Netherlands, the Flemish province of East Flanders (Oost-Vlaanderen) and the Walloon province of Hainaut (Henegouwen) in Belgium, on France, and the North Sea. Its capital is Bruges (Brugge). Other important cities are Kortrijk in the south and Ostend along the coastline. The province has an area of 3,125 km² which is divided into eight administrative districts (arrondissementen) containing 64 municipalities.

The whole Belgian North Sea coast, an important tourism destination, lies in West Flanders. A tram line runs the length of the coast, from De Panne on the French border to Knokke-Heist on the Dutch frontier.

West Flanders consists of the North Sea coast, followed by a very flat polder landscape. Only in the south are some small hills, with the Kemmelberg (159 m) being the highest point in the province. The Leie and IJzer are the main rivers. West Flanders is the only Belgian province that borders both France and The Netherlands.

In the north of the province, most industry is concentrated in and around the cities of Bruges and Ostend. Both cities also have important seaports: the port of Bruges-Zeebrugge and the port of Ostend.

The south is known for its textile industry, with companies such as Beaulieu and Libeco-Lagae. The region around Kortrijk is called the "Dallas of Belgium" for its entrepreneurship.

Tourism is also an important industry in West Flanders. Major touristic attractions include the Belgian coast, the historic center of Bruges, and Flanders Fields, the World War I battlefields around Ypres.

The Province of West Flanders is divided into 8 administrative arrondissements.

The Province of West Flanders is divided into 4 judicial arrondissements. 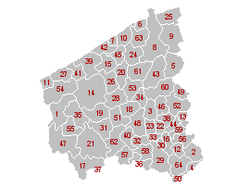 Map of the municipalities in West Flanders

Municipalities that have city status have a (city) behind their name.