You have reached the cached page for https://www.dailymail.co.uk/news/article-5604881/Attorney-Missouri-governors-blackmail-mistress-says-hes-smearing-her.html
Below is a snapshot of the Web page as it appeared on 3/19/2021 (the last time our crawler visited it). This is the version of the page that was used for ranking your search results. The page may have changed since we last cached it. To see what might have changed (without the highlights), go to the current page.
You searched for: +what is missouri's nickname governor democrat governor We have highlighted matching words that appear in the page below.
Bing is not responsible for the content of this page.
Attorney for Missouri governor's 'blackmail' mistress says he's 'smearing' her | Daily Mail Online

By Associated Press and David Martosko, Us Political Editor For Dailymail.com

Attorneys for Missouri Gov. Eric Greitens are conducting a 'smear campaign' against a woman with whom he had an affair as he awaits trial next month on allegations that he took and transmitted a nonconsensual photo of the woman while she was partially nude, the woman's attorney said Tuesday.

The remarks from attorney Scott Simpson came before a judge issued a partial gag order aimed at tamping down escalating publicity in the case. A court filing Sunday by Greitens' team was a catalyst for the gag order as well as Simpson's remarks.

'It's important to note this is a woman who is involuntarily involved in this case, and the way that they respond is to publicly try to smear or otherwise attack her credibility,' Simpson said in a telephone interview.

'Their actions are beyond what is normal in the course of defending a criminal defendant.' 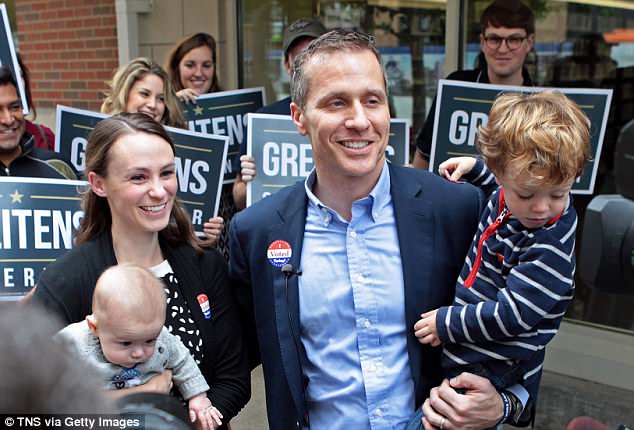 A Missouri judge has issued a gag order in the felony invasion of privacy trial off Republican Gov. Eric Greitens (center, with wife Sheena and their children) after his lawyers released a court document alleging that the victim in the case invented the entire episode based on a dream 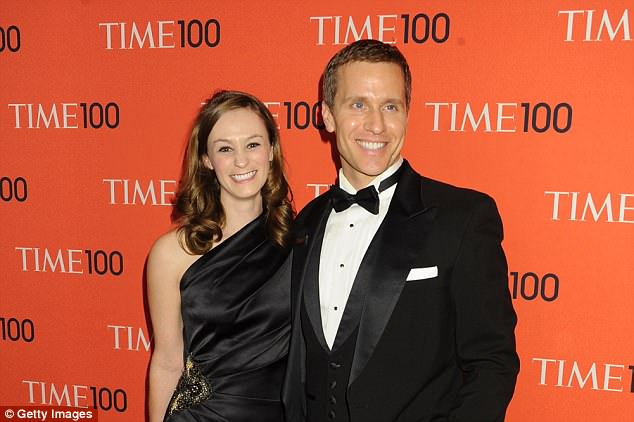 Greitens' attorneys say his mistress, a hairdresser, testified she never saw him with a camera or phone on the day he is accused of taking a partially nude picture of her while she was blindfolded and bound 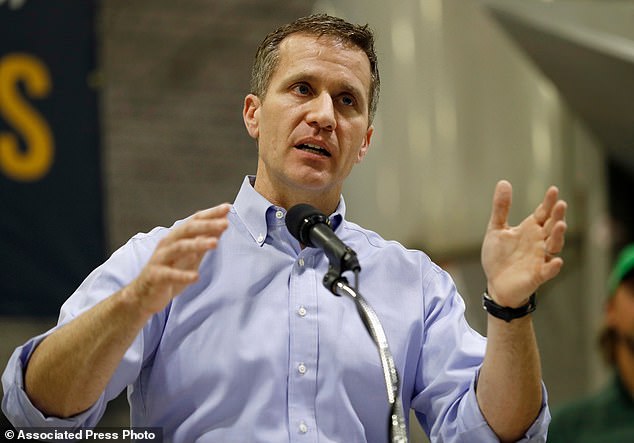 The 43-year-old governor, a father of two and retired Navy SEAL, has admitted to the affair but has held on to his job while he fights the criminal charge; his paramour, according to the salacious court pleading, once sent him her own racy photos – suggesting they were in the habit of sexting

Greitens, a Republican who turned 44 Tuesday, is charged with felony invasion of privacy for taking the photo, which the woman says Greitens threatened to make public if she ever revealed the affair that happened in 2015, before Greitens was elected. 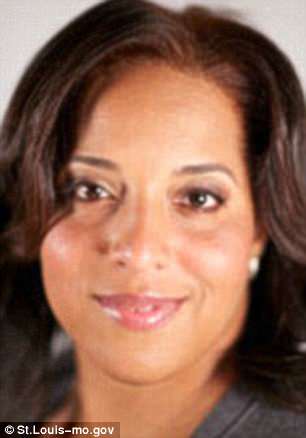 Until this week, Simpson and the woman had declined to talk publicly about the substance of the case, saying the woman wanted privacy.

Simpson's response followed the court filing by Greitens' attorneys that said the woman participated in a lengthy deposition Friday, during which she was asked if she saw what she believed to be a phone.

The court filing quoted her as saying, 'I haven't talked about it because I don't know if it's because I'm remembering it through a dream or I – I'm not sure, but yes, I feel like I saw it after that happened.'

Simpson said the 'dream' comment came at the end of a nine-hour deposition and referred to one particular instance concerning the photo. He said Greitens told the woman several times that he had a photo, and he threatened to use it if she spoke of the affair.

'His statement to her was that if she ever mentioned his name or told anybody about this relationship, he would distribute the picture everywhere he could and it would be all over the place, the internet and otherwise,' Simpson said.

The surge of publicity that followed the defense filing prompted Circuit Attorney Kim Gardner to ask Judge Rex Burlison for a gag order, accusing Greitens' attorneys of trying the case through the media. 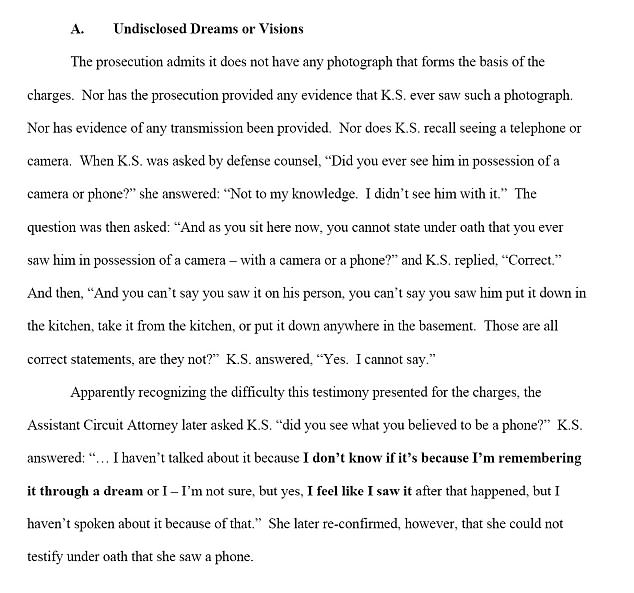 'I haven't talked about it because I don't know if it's because I'm remembering it through a dream,' the unnamed woman testified during a deposition, according to the defense's motion to force prosecutors to hand over anything else they might have that would be favorable to the governor's case 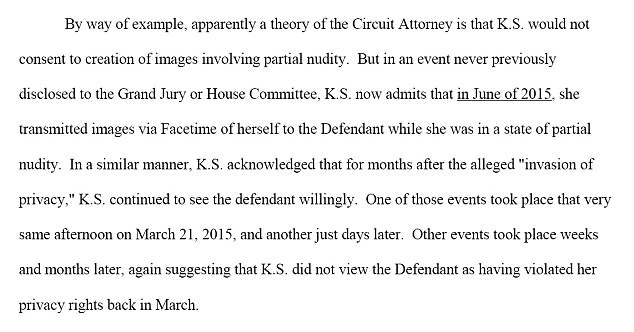 '[I]n an event never previously disclosed to the Grand Jury or House Committee,' the court petition alleges, the woman admitted that 'she transmitted images via Facetime of herself to the Defendant while she was in a state of partial nudity'; Greitens' lawyers also claim that 'for months after the alleged "invasion of privacy",' the woman 'continued to see the defendant willingly'

Burlison's order does not stop attorneys from speaking about public information in the case, but prohibits comments related to deposition material, opinions about what witnesses might testify to and other speculative issues. The ruling also will require the judge to sign off on certain court filings before they're made public.

The criminal case isn't the sum of Greitens' worries. A special legislative committee investigating the governor is expected to release its report Wednesday, according to a news release from the Missouri House. The investigation is a potential precursor to impeachment proceedings.

Meanwhile, Republican Attorney General Josh Hawley is investigating The Mission Continues, the veterans charity founded by Greitens, as it relates to the state's consumer protection and charitable registration and reporting laws.

Jim Martin, an attorney for Greitens, questioned whether the gag order meant Greitens could not respond to the House investigative report. Burlison declined to take a position on how the governor responds to the report. 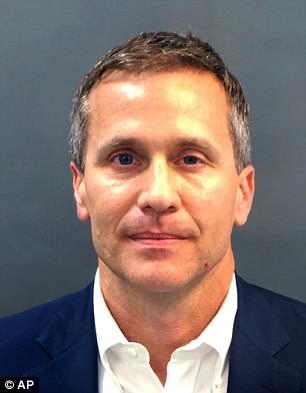 Greitens, Missouri's top elected official, was mugshotted by the St. Louis Metropolitan Police Department after his felony arrest in February

Simpson said the Greitens team wants to discredit his client, identified in court documents only as K.S., before she testifies at his trial that begins May 14 in St. Louis.

During the court session over the gag order, he accused Greitens' attorneys of 'filing press releases in the form of motions.'

One of Greitens' attorneys, Jack Garvey, said the motions are necessary to refute the allegations against the governor.

'We're not making up the facts or their lack of evidence,' Garvey said.

Greitens has blamed Gardner, a Democrat, for a politically-motivated investigation that led to the grand jury indictment in February.

He spent an estimated $50,000 on a recent statewide radio ad buy to make the case for staying in office despite the indictment. The ad, financed by Greitens' campaign fund, said liberals are 'hell-bent on stopping his conservative reforms.'

'Eric Greitens is on a conservative mission for Missouri and he won't stop until the mission is complete,' the ad says.