You have reached the cached page for https://www.cambridge.org/core/books/hi-hitler/04A662624D1A27393AC46D522A241C6C
Below is a snapshot of the Web page as it appeared on 4/7/2021 (the last time our crawler visited it). This is the version of the page that was used for ranking your search results. The page may have changed since we last cached it. To see what might have changed (without the highlights), go to the current page.
Bing is not responsible for the content of this page.
Hi Hitler! Skip to main content Accessibility help

We use cookies to distinguish you from other users and to provide you with a better experience on our websites. Close this message to accept cookies or find out how to manage your cookie settings.

How the Nazi Past Is Being Normalized in Contemporary Culture 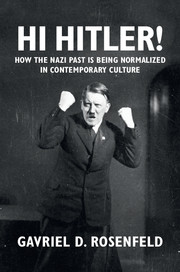 The Third Reich's legacy is in flux. For much of the post-war period, the Nazi era has been viewed moralistically as an exceptional period of history intrinsically different from all others. Since the turn of the millennium, however, this view has been challenged by a powerful wave of normalization. Gavriel D. Rosenfeld charts this important international trend by examining the shifting representation of the Nazi past in contemporary western intellectual and cultural life. Focusing on works of historical scholarship, popular novels, counterfactual histories, feature films, and Internet websites, he identifies notable changes in the depiction of the Second World War, the Holocaust, and the figure of Adolf Hitler himself. By exploring the origins of these works and assessing the controversies they have sparked in the United States and Europe, Hi Hitler! offers a fascinating and timely analysis of the shifting status of the Nazi past in western memory.

'Endowed with erudition, deep scholarship, fluent style and a sense of humor, Hi Hitler is a major contribution to our understanding of current memories of the Third Reich and their consequences.'

Alon Confino - author of A World Without Jews: The Nazi Imagination from Persecution to Genocide

'Gavriel D. Rosenfeld’s Hi Hitler! is a compelling analysis of the way a broad range of scholars, filmmakers, and writers have addressed and are currently addressing the legacy of Nazism, the Third Reich and the Holocaust. Anyone who wonders how a specifically situated historical event has come to have such broad resonance and meaning today across continents, cultures, religions and nationalities will find this book indispensable.'

Deborah Lipstadt - author of History on Trial: My Day in Court with a Holocaust Denier and Denying the Holocaust: The Growing Assault on Truth and Memory

'Gavriel D. Rosenfeld has tracked the idea of Hitler - in all its revisionist guises - with keen insight, care and spectacular force.'

Noah Isenberg - author of Edgar G. Ulmer: A Filmmaker at the Margins

'An interesting and important book, because it will give many readers - as it did this one - much food for thought. It takes us forward in understanding contemporary processes of confronting Nazism and points to future avenues we need to explore. Few books do that. It is fluidly written … engaging, well-illustrated and extraordinarily well-informed. It provides a much-needed comparison of memory trends across a number of countries and raises uncomfortable questions about possible processes of trivialization. It deserves a wide readership.'

'Referencing books, speeches, movies, and essays, Rosenfeld inexorably builds a thoroughly convincing case that something has shifted in both academia and in politics - that the Holocaust’s heretofore unquestioned status as the great sin of the twentieth century (and by association, the Nazis’ status as the century’s greatest villains) is now far from a consensus.'

'Rosenfeld’s study is important and timely, as well as lucid, engaging and readable.'

'The primary argument here is that an increasing number of historical representations - both academic and popular - normalize the Nazi past by relativizing, universalizing, or aestheticizing it. The more such depictions flatten the moral contours of the past, however, the more they draw attention to the uniqueness of their subject. Because the Nazi past has not been allowed to fade organically, Rosenfeld claims, it has entered into a 'dialectic of normalization' that serves only to reinforce this past’s exceptionality. The author certainly presents much evidence to substantiate these arguments. Rosenfeld’s prowess at synthesizing both historiography and media products is impressive. As a descriptive enterprise, the book makes a tremendous contribution and will be cited as a landmark study for years to come.'

'Gavriel D. Rosenfeld’s book on the legacy of the Holocaust and World War II strikes new ground through his inclusion of new media in an analysis of how popular memory has undergone a process of normalization. While he is interested in the normalization process in the United States, Great Britain, and Germany, he also covers recent trends in Eastern Europe, Israel, and a few other places, giving the work a global scope and revealing intellectual trends as transnational phenomena.'

'… [a] fascinating and perceptive book.'

To send content items to your account, please confirm that you agree to abide by our usage policies. If this is the first time you use this feature, you will be asked to authorise Cambridge Core to connect with your account. Find out more about sending content to .

Find out more about the Kindle Personal Document Service.

Please be advised that item(s) you selected are not available.
You are about to send
×

Book summary views reflect the number of visits to the book and chapter landing pages.

* Views captured on Cambridge Core between #date#. This data will be updated every 24 hours.