You have reached the cached page for https://www.lightforcenetwork.com/holyman-preter/end-times-and-restoration-all-things
Below is a snapshot of the Web page as it appeared on 8/17/2021 (the last time our crawler visited it). This is the version of the page that was used for ranking your search results. The page may have changed since we last cached it. To see what might have changed (without the highlights), go to the current page.
You searched for: +what are the different orthodox religions judaism and israel We have highlighted matching words that appear in the page below.
Bing is not responsible for the content of this page.
The End Times And The Restoration Of All Things | Light Force Network

The End Times And The Restoration Of All Things 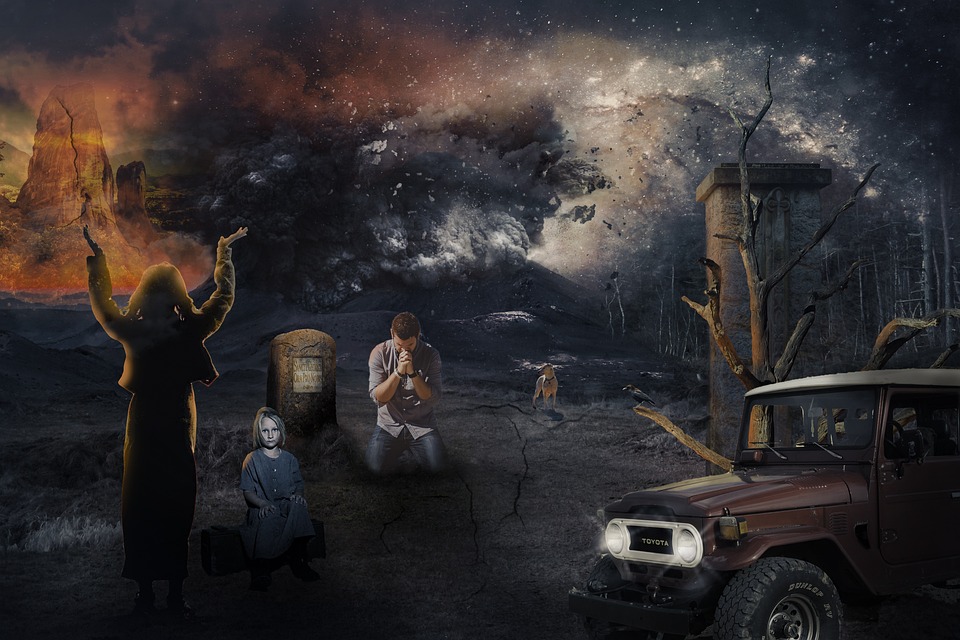 Image by Ulrich B. from Pixabay

The devoutly religious Isaac Newton wrote theological treatises interpreting Biblical prophecies and predicting the end of the world. The date he arrived at? 2060.  It’s important to note that Newton didn’t believe the world would “end” in the sense of cease to exist or burn up in holy flames. His end times philosophy resembles that of a surprising number of current day evangelicals: Christ would return and reign for a millennium, the Jewish diaspora would return to Israel and would, he wrote, set up “a flourishing and everlasting Kingdom.” - Josh Jones -  https://www.openculture.com

Nostradamus' prophecies end in the year 3797, possibly foretelling the end of the world. Other dates have been toyed with by prophecy interpreters including 2063.

The Sunni Muslim theologian, Said Nursi applying numerology to a hadith  he had arrived at a date of 1545 for the arrival of doomsday. 1545 in the Hijri calendar would be 2122; in the Rumi calendar it would be 2129. Nursî added that this was not a definite prediction, as "nobody knows the time of doom in a strict manner".

According to Rashad Khalifa, Egyptian-American biochemist's research on the Qu'ran, the world will end in 2280.- https://en.wikipedia.org

“The earth abideth for ever,” says the Bible (Ecclesiastes 1:4). Whether this is literally true or not, it corresponds to the deepest core of human experience. The Earth was around long before the existence of human beings, and it will probably continue to exist long after we are extinct. Why, then, does the belief in the end of the world – not as a remote possibility but as an imminent event – persist so stubbornly in the mass consciousness?

For we continue to believe – and even long for – the fabled Time of the End. The number of predicted dates for this event are astonishing,1 and the huge number of failures has not diminished our appetite for plenty of new dates to come.

To understand how this mentality came about, it would be useful to look at the history of the genre known in theological jargon as apocalyptic (from the Greek apokalypsis, “revelation”). While apocalyptic has important predecessors in biblical literature (such as Ezekiel and parts of Isaiah), its origins are generally dated to the second century BCE. At the time the Jewish nation was living under the rule of the Hellenistic Seleucid monarchs, who were heirs to a portion of the empire of Alexander the Great. In 167 BCE, one of these rulers, Antiochus IV Epiphanes, embarked on a program of forced Hellenisation of the Jews, setting up an altar, and perhaps an image, of Olympian Zeus in the Temple in Jerusalem.

The outrage of the Jews is reflected in the Book of Daniel, one of the earliest apocalyptic writings and the only one to make its way into the Hebrew Bible. Written during the ensuing revolt against the Seleucids, this book sets up Daniel, a legendary sage of the sixth century BCE, as the mouthpiece of a prophecy that would “foretell” events 400 years after his time. (The technical term for this practice is vaticinium ex eventu, “prediction after the event.”) Daniel refers to “a vile person” – Antiochus – who will “pollute the sanctuary of strength, and shall take away the daily sacrifice, and… shall place the abomination that maketh desolate” (Dan. 11:21, 31) – that is, the idol in the Temple (cf. 1 Macc. 1:54). The archangel Michael will come to Israel’s rescue; the dead will be raised, “some to everlasting life, and some to shame and everlasting contempt.” Antiochus “shall come to his end, and none shall help him” (Daniel 11:45, 12:1-2).

What happened in fact was that the Jews rose up under the priestly family of the Maccabees and won back their independence, but this obviously did not begin the end of time. Antiochus himself did not perish as a result of any obvious divine wrath: he died of disease.

Despite its failure as a prophecy, the Book of Daniel set up the basic structure of the apocalyptic genre. Arising during some crisis, a text of this kind predicts that this event is the harbinger of the Day of Judgment, when justice will be done and evildoers will receive their due. The Book of Revelation at the end of the New Testament is much the same: many scholars say that it is a response to the persecution of Christians by the Roman emperor Domitian in the last decade of the first century CE. (The Greek title of Revelation, apokalypsis, gave its name to the genre.)

Even this very brief survey tells us something important about apocalypse and our attraction to it. There is a profound human hunger for justice – not only in the social arena but in the universe. And yet the forces of history often seem indifferent to justice: the righteous suffer while the wicked thrive. Every culture has made its own attempt to reconcile these facts. The traditions that arose out of India – Hinduism and Buddhism – posit the law of karma, played out across the backdrop of many lifetimes, as a way of explaining the apparent unfairness of the world. But reincarnation has always been very much a minority view in the West. Nor did the ancient Jews even have a very clear conception of the afterlife; reward in heaven and hell was only introduced later on, from Greek mystery religions.

Thus the solution the Jewish prophets proposed was the “day of Yahweh” – a final point in history when malefactors would all be brought to justice and the good (inevitably identified with one’s own people or sect) would finally be given their due. This has been such a powerful perspective that it has left its stamp upon practically everyone in Western civilisation. Even twentieth-century distortions such as Hitler’s Thousand-Year Reich and the glorious utopia under the rule of the proletariat, as prophesied by communism, owe much of their inspiration to the apocalyptic genre.

From all this it would seem that both the fears and the longings for the End Times are simply foolish. And yet it is not quite that simple. Deep down within the human heart lies the unshakable conviction that something is not right about the world we live in. We characterise the problem in different ways – politically, sociologically, psychologically, theologically – but the feeling is so pervasive that man can be defined as the animal that believes something is wrong. We can then ask ourselves, is there a chance that the cosmic order can be restored to its proper state?

This idea has constantly resurfaced in human thought, and as more than a simplistic version of the Last Judgment. The Christian church father Origen (c.185-c.254 CE) speculated about what he called the apokatastasis or “restoration” of all things, citing such biblical passages as 1 Corinthians 15:28: “And when all things shall be subdued unto him [God], then shall the Son also himself be subject unto him that put all things under him, that God may be all in all.” Origen even dared to suggest that all beings had the possibility of redemption, including the devil himself.

For bold theological moves such as this, Origen was eventually repudiated by the mainstream church, but his theology has continued as a source of inspiration up to the present. Even some orthodox church fathers, such as Gregory of Nyssa (c.335-c.395) and Maximus the Confessor (c.580-662), discussed universal redemption as a serious possibility. In the nineteenth-century United States, the Universalist Church was founded on the basis of this doctrine, and in the twentieth century the highly popular and influential text A Course in Miracles spoke of what it called the “Atonement,” in which all beings will eventually come to realise their fundamental unity with God. A parallel in Mahayana Buddhism is the hope for the ultimate enlightenment of all sentient beings.

Underlying this idea is another, equally important theme. We constantly hear the saying “We are all one,” but what does that really mean? Certainly in ordinary life we are not all one; I am not you, and you are not me. But, the esoteric traditions tell us, this is only apparently so. In reality we are all cells in a much larger being – a cosmic human who has been known to the Kabbalists as Adam Kadmon, to the eighteenth-century Swedish mystic Emanuel Swedenborg as the maximus homo or universal human, and to A Course in Miracles as the Sonship. (In reply to the question of whether Jesus Christ is the Son of God, the Course replies, “O yes, along with you!”) The apokatasasis is the restoration of each individual to his or her rightful place in this cosmic human, which will then reveal the profound truth of the assertion that we are all one.

This esoteric idea differs from the popular conception of the Last Judgment in two important ways. In the first place, it holds that ultimately no one will be condemned. While some will accept the truth of the Atonement sooner than others, eventually all will take part in it. In the second place, it is not posited as some kind of event that will occur next year or next decade. Instead the teaching says that the process of the Fall – the fragmentation of this cosmic human into the disharmonious, apparently separate entities that we now seem to be – took place over the span of unimaginable eons, and that the restoration will require a similarly immense amount of time to be realised.

As such, this vision does not offer many of the consolations that the conventional picture of the apocalypse provides. It does not give the believer the satisfaction of contemplating the immolation of the wicked (who are usually imagined as one’s own enemies, however these are construed). It does not provide the sensational thrill one might get from thinking that the end of the world is just around the corner. But in acknowledging that the human race is part of an enormous cosmic process, on a scale that we can scarcely conceive of, and in reconciling divine justice with divine mercy, it is a vision that deserves our consideration as well as our respect.

© Copyright New Dawn Magazine, www.newdawnmagazine.com. Permission granted to freely distribute this article for non-commercial purposes if unedited and copied in full, including this notice.

© Copyright New Dawn Magazine, www.newdawnmagazine.com. Permission to re-send, post and place on web sites for non-commercial purposes, and if shown only in its entirety with no changes or additions. This notice must accompany all re-posting.