You have reached the cached page for https://www.salsfootprints.com/prague-guide/
Below is a snapshot of the Web page as it appeared on 3/30/2021 (the last time our crawler visited it). This is the version of the page that was used for ranking your search results. The page may have changed since we last cached it. To see what might have changed (without the highlights), go to the current page.
You searched for: +was prague a city located usa We have highlighted matching words that appear in the page below.
Bing is not responsible for the content of this page.
Prague: City Guide - Visit Higher

Looking at photos of Prague, I was very excited to visit the Czech capital. It looks like a fairytale city ready to be explored. If I’m being honest, Prague was a bit of a disappointment. Yes, I will admit that it is one of the most beautiful cities I’ve visited, but there was something about it that I didn’t like.

I think that the vibe you get from a city is extremely important, and for some reason I just didn’t vibe with Prague. It is a bit too touristy for my taste. Despite this, I still think you should visit and will share some of my tips for seeing the city. Prague is very close to the German city of Dresden, which I ended up visiting on a day trip from Prague. You can read about that here.

I stayed at Hostel Santini, which was an okay stay. I probably wouldn’t come back to this hostel though. When I arrive, I found out I had to pay in cash (which I didn’t know before I arrived, and their onsite ATM didn’t work), so that was a bit frustrating. They did have free breakfast, but it was just half a sandwich and some cereal. It’s not in the best location, but it’s also not the worst. It is walkable to everything, but it’s not really right in the middle of the action.

Prague is a fairly walkable city, but you can also get around using the underground and tram system. It is very confusing though, and it can be hard to actually pay for a ticket. Don’t be tempted to just ride it for free though, as there are plenty of ticket inspectors across the network ready to fine you. I found it was easiest to buy a few tickets in bulk when I found a working machine, and then use those when I needed them. Some took card, but most were cash only.

One of Prague’s main attractions is the Prague Castle. It’s located on top of a hill, and is a very prominent building in Prague’s skyline. Once I got to it, I was a little bit confused. It’s not really like a normal castle. There is a large cathedral in the middle of the castle walls, and it doesn’t really feel like it’s a residence at all. The castle does provide a very nice view of the city.

The Old Town is another big attraction of the city, specifically the Old Town Square. This square showcases some of the best of the gothic architecture in the city. It’s a nice area to wander around, but it feels very touristy. There are many stores selling Trdelník (chimney cake). I was very excited to try one, but it was cold, rather than being hot like I expected. They also aren’t traditional Czech food as they are made out to be, rather created as a tourist ploy.

Charles Bridge is a historic pedestrian only bridge crossing the Vltava River. It is a very beautiful bridge, and there are vendors selling things like paintings along it. Charles Bridge directly connects the old town with Prague Castle.

Charles Bridge is also quite close to the John Lennon Wall. I’m fairly certain that what you see changes quite quickly, but I found it quite underwhelming. I’m a bit street art lover, but this does just seem like a lot of graffiti. The wall actually has no connection to John Lennon either.

I also took a free walking tour in Prague, which is something I do in most of the European cities I visit. Usually I love these tours, they’re informative and are a great basis towards seeing a city. However, the tour I went on in Prague was boring. I don’t know if it was the tour guide or the content (probably a mix of both), but I ended up leaving early from the tour, and I wasn’t the only one.

Prague is undoubtably a beautiful city, but I think it is a little bit overrated. I hope you enjoy the city more than I did! 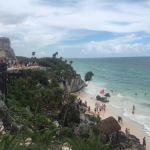 Hey there, I'm Sally. In 2016 I went on my first solo trip and I've been backpacking ever since. I made this blog to share some tips on some of the places I've visited. Enjoy! x