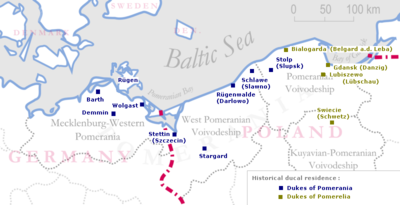 10th and 11th century – Dukes of the Slavic Pomeranian tribes

In 1231 Emperor Frederick II granted the immediate liege lordship over Pomerania to the Margrave of Brandenburg, who enforced this claim by the Treaties of Kremmen (1236) and of Landin (1250). Thus Pomerania had become a fief of Brandenburg, thus an only mediate (indirect) subfief of the Empire, with Brandenburg itself being an immediate imperial fief.

After Wartislaw III died heirless in 1264, Barnim I became sole duke of the whole duchy. After Barnim's death, the duchy was to be ruled by his sons Barnim II, Otto I and Bogislaw IV. The first years, Bogislaw, being the eldest, ruled in place of his too young brothers, too. In 1295, after Barnim's death, the duchy was partitioned into a northern duchy (Wolgast, ruled by Bogislaw), and a southern duchy (Stettin, ruled by Otto).

In 1459, -Stargard and -Stolp were both annexed by -Wolgast.

After 200 years of partition, the duchy was reunited for a short period when all her parts were inherited by Bogislaw X.

In 1625, with the death of Philip Julius, Bogislaw XIV reunited all Pomerania.

Lands of Schlawe and Stolp

In 1227, Stolp came to Pomerelia, Schlawe to Pomerania. In 1238–1316 both became part of Pomerelia, ruled by an autonomously acting dynasty of castellans, the Swenzones (German: Swenzonen, entering history in 1257 with Swenzo the Elder). In 1316, the area became part of the Pomerania-Wolgast, first as a pawn from Brandenburg, and definitively in 1347.

The dukes initially resided at a burgh located in the later village of Lubiszewo (Liebschau). After the town of Dirschau (Tczew) was founded nearby in the course of the German Ostsiedlung, the dukes shiftet their residence to the town.

All translations of List of Pomeranian duchies and dukes