You have reached the cached page for https://allaboutroyalfamilies.blogspot.com/2016/11/
Below is a snapshot of the Web page as it appeared on 2/25/2021 (the last time our crawler visited it). This is the version of the page that was used for ranking your search results. The page may have changed since we last cached it. To see what might have changed (without the highlights), go to the current page.
You searched for: +viridis visconti wikipedia pictures We have highlighted matching words that appear in the page below.
Bing is not responsible for the content of this page.
All About Royal Families: november 2016 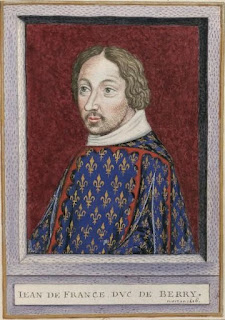 John of Berry was born as a son of King John II of France and
Bonne of Bohemia.

His siblings were inter alia: 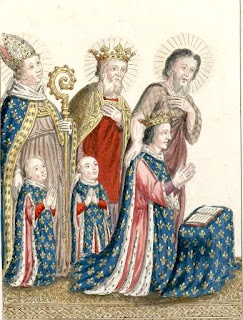 He also had one illegitimate son with a Scottish
woman.

In 1389 he married his second wife Joan II, Countess of
Auvergne. They would have no children together.

By his birth, his father granted him the title:
Count of Poitou.

In 1360, Poitiers was ceded to England. John was
created Duke of Berry and Auvergne.

The Treaty of Brétigny declared that John became
hostage to the English crown. He remained in England
till 1369.

In 1380, Johns older brother died and he became
one of the regents for King Charles VI of France, who
was then a minor.

Besides his duties, John, Duke of Berry also was an
important art patron.

Prince William, Duke of Gloucester and Edinburgh was born on 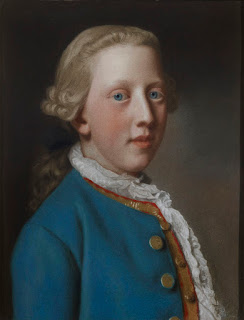 His parents were Frederick, Prince of Wales and Princess Augusta
of Saxe-Gotha.

His grandparents were inter alia King George II and Caroline of
Ansbach.

On November 19th. 1764, Prince William was styled Duke of
Gloucester and Edinburgh and Earl of Connaught.

In 1764, Prince William began to court Maria Walpole, the
Dowager Countess of Waldegrave.

In 1766, he and Maria maria married in secret in his home on
the Pall Mall.

This marriage only became known to the King after the passing
of the Royal Marriages Act 1772. The couple would have 3
children. He also had a illegitimate daughter, born with his
mistress.

However, their marriage was valid, Maria never was received
at court due to the anger of the King.

Prince William initially wished for active service in the military,
but due to his health and his intelligence, this wasn't a great
success.

However in 1766, he was appointed colonel of the 13th
Regiment of the Foot.

With the outbreak of the American Revolutionary War, the Duke
hoped for a field command but King George refused. 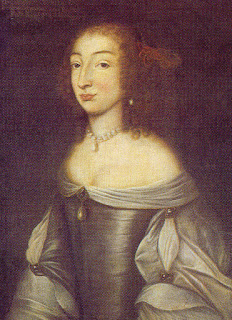 At Heidelberg Castle, Charlotte married on February 22nd. 1650 to her
cousin, Charles I Louis, Elector Palatine.

At the beginning everything went very well as Charles Louis started
with his task of providing the Palatinate with an heir.

According to Charles Louis' sister Sophia 'his passion had impaired his
intellect'.

Charlotte and Charles Louis didn't have the same interests. She loved
riding on a horseback, but her husband rejected that. She also loved
gambling which Charles Louis regarded as a waste of money.

In 1651 a son was born and in 1652 a daughter. Later a new woman
came to the court. This was Marie Luise von Degenfield. She would
become Charles Louis' mistress. Their relation started in 1658 and
they would have 13 children while he was still married to Charlotte.

Charlotte maintained that she was kept a prisoner in her apartments.
She beat her servants and they were dismissed.

Later Charles Louis divorced Charlotte but he kept this secret after
his sisters wedding.

Since her divorce Charlotte lived the next 23 years in obscurity.

Charlotte, Landgravinne of Hesse-Kassel died on March 26th. 1686
at Heidelberg. 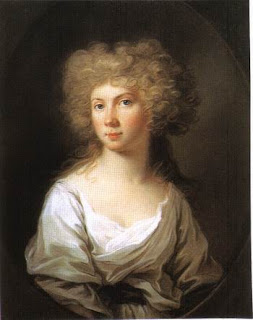 Princess Wilhelmine was a daughter of King Frederick William II of Prussia
and Queen Frederica Louisa. Her education was dominated by the strict
regime of her great-uncle Frederick the Great. However there wasn't much
known about her youth. 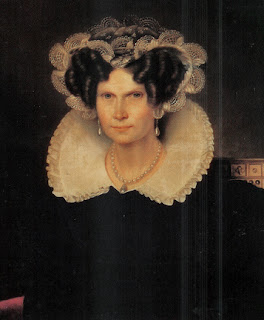 On October 1st. 1791, Princess Wilhelmine married her cousin,
William of the Netherlands. He was the son of Stadtholder William V,
Prince of Orange. Their wedding took place in Berlin.

Their marriage was a part of an arranged wedding pact between the
House of Orange and that of Prussia.

It became a real love match and their marriage life was very happy.
They young couple lived at the Noordeinde Palace in The Hague.

They would have 6 children, only 3 of them would reach their
adulthood.

Queen Wilhelmine was modest and she liked to stay in the background
so she didn't play a dominant role as queen. She wasn't popular.

Queen Wilhelmine also was criticized for her German style of
dressing.

She liked to paint, as queen she attended exhibitions, protected
museums and supported artists.

Queen Wilhelmine died on October 12th. 1837 at Noordeinde
Palace in The Hague. She is entombed in the New Church in
Delft.

See also the page : The Netherlands a Royal History on top
of my blog or on this link

November 13th. 1801 marks the birth of Amalie Auguste of Bavaria.
This took place in Munich, Bavaria. 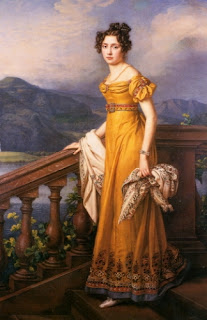 Her parents were King Maximilian I Joseph of Bavaria and
Caroline of Baden. Amalie Auguste was the identical twin sister of
Elizabeth Louise, Queen of Prussia. She also was an aunt of Empress
Elisabeth of Austria, known as Sisi.

The royal couple would have 9 children.

In 1851 Amalie Auguste became chairman of Women's Association of
Dresden. This was founded by her sister (the former Queen of Saxony).

Amalie Auguste reorganized the foundation and the organization
continued till 1932! 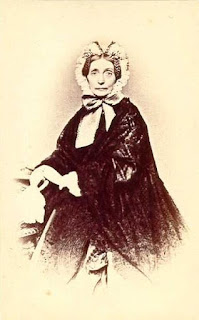 Amalie Auguste died on November 8th. 1877 at the age of 75 in
Wachwitz, Dresden.

Auguste was born on November 10th. 1704 at Schloss Johanisburg in
Bavaria. 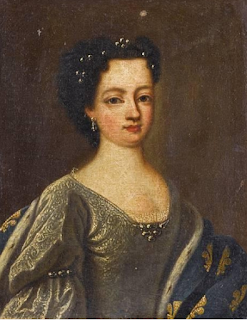 Her mother was Duchess Sibylle of Saxe-Lauenburg.
See Link

Auguste preferred the German prince but her mother wanted a French
wedding and Auguste agreed. The marriage took place on June 18th. 1724
in Baden-Württemberg and on July 13th. 1724 in France.

They would have 2 children.

She became very popular at the court of Versailles and was known as
charming.

Auguste died on August 8th. 1726, shortly after giving birth of her
second child.

James Ensor (April 13th. 1860 - November 19th. 1949) lived in Ostend
and was a famous Belgian painter who had an important influence on
expressionism and surrealism. 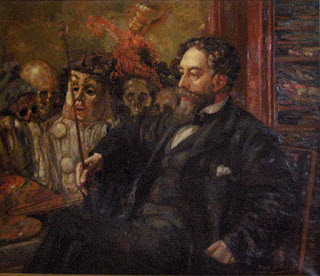 From 1877 till 1880, James Ensor attended the Académie Royale des
Beaux Arts in Brussels. Later Ensor traveled to France, the Netherlands
and he even made a four-day visit to London.

Initially, people found his works scandalous. However in 1895 one of his
paintings was bought by the Royal Museums of Fine Arts of Belgium in
Brussels.

Nowadays his works are spread over a lot of museums in the world.

In 1929, King Albert granted the title Baron to James Ensor.

This summer there was an exhibition in the Royal Palace of Brussels
about Queen Elisabeth, the wife of King Albert of Belgium, and her
passion for art.

One of the objects that was shown was a written card of James Ensor
to Queen Elisabeth.

In Ostend, Belgium, people still can visit the Ensor House, this is the
house where he lived and where his family had a little shop. See this link.

From October 29th. 2016 till January 29th. 2017 there is a exhibition in
the Royal Academy of Arts in London (United Kingdom).
The exhibition is called:
Intrigue: James Ensor by Luc Tuymans.
More information on this link.
Geen opmerkingen:
Dit e-mailen BlogThis!Delen op TwitterDelen op FacebookDelen op Pinterest

Leopold III,  Duke of Austria was born on November 1st. 1351 in Vienna.
He was a member of the noble House of Habsburg. 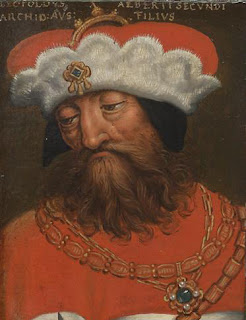 His parents were Albert II 'The Wise' of Austria and Johanna of Pfirt. His
mother was 51 years old, when she gave birth to Leopold. Shortly after she
died.

On February 23rd. 1365, Leopold married to Viridis Visconti. She was the
daughter of Bernabo Visconti, Lord of Milan and Beatrice Regina della Scala.

Leopold and Viridis would have 6 children.

Leopold was firstly administrator of Tyrol and he was charged (jointly) to rule
the Habsburg Lands.

Leopold died on July 9th. 1386, during the Battle of Sempach. He was
succeeded by his eldest son William.

Search in this blog

Kathleen Van Lierop
Sint-Niklaas, België, Belgium
The Allaboutroyalfamilies blog is blog about the past and present of royal families and travels with a royal link