You have reached the cached page for https://royal-splendor.blogspot.com/2019/06/inveraray-castle.html
Below is a snapshot of the Web page as it appeared on 4/19/2021 (the last time our crawler visited it). This is the version of the page that was used for ranking your search results. The page may have changed since we last cached it. To see what might have changed (without the highlights), go to the current page.
You searched for: +valdemar iv duke of schleswig 2017 2018 season 5 episode 11 We have highlighted matching words that appear in the page below.
Bing is not responsible for the content of this page.
Inveraray Castle, Scotland’s Iconic Attraction Skip to main content

Inveraray Castle or Caisteal Inbhir Aora (Scottish Gaelic) is a country house in the town of Inveraray in the county of Argyll in Scotland, United Kingdom. It sits on the shore of Scotland’s longest sea loch, Loch Fyne. Classified as an A-listed building, Inveraray Castle is one of the earliest examples of Gothic Revival architecture.

The site of Inveraray Castle was previously occupied by a small medieval castle that was built in the mid-15th century after the head of Clan Campbell, Sir Duncan Campbell, decided to move the family seat from Loch Awe to Loch Fyne. Being on Loch Awe made the Campbells important throughout Argyll, but transferring to Loch Fyne meant access to the sea and the Firth of Clyde, and it also allowed them to be one of the most important families in Scotland for centuries.

There was once an old stronghold—a four-storey tower with a garret, and bartizans with conical roofs—near Inveraray Castle. However, nothing of which remains today.

Inveraray Castle was inspired by a sketch done by John Vanbrugh, architect of the Blenheim Palace.  After the 2nd Duke of Argyll thought he needed something grander, work on the Inveraray Castle began in 1743, however the foundation stone was not laid until October 1746. Built on a rectangular plan, architects William Adam and Roger Morris created a symmetrical classical mansion in an amazing concoction of Palladian, Gothic, and Baroque styles, with circular towers and mock-military features such as turrets, slit windows and moats. The roofs were originally flat and crenellated, and, later, a third floor with pitched roof and dormer windows was added on all four wings and steep conical roofs were added on top of the four round towers. All in all, it took 43 years to complete the castle. The original designers did not see the castle finished; work was continued by William Adam’s architect sons, Robert and John. The 5th Duke of Argyll later commissioned French artists to paint the ceiling of the Dining Room, and weavers from Beauvais to create chair covers.

To provide an uninterrupted sweeping view of the castle, the entire Inveraray burgh, which dates back to the 18th century, had to be destroyed and rebuilt half a mile away. 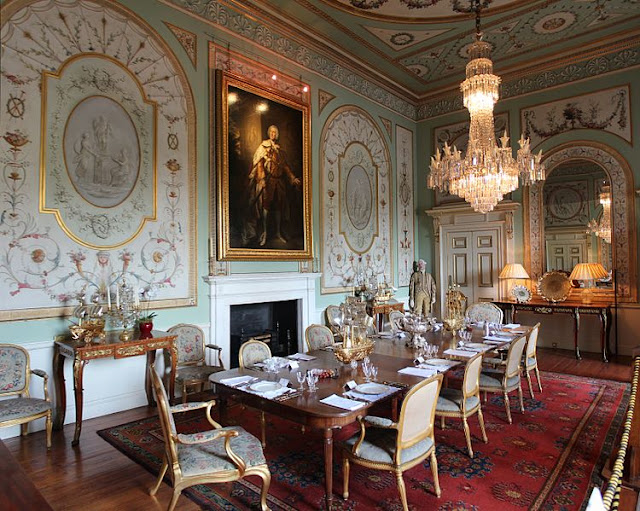 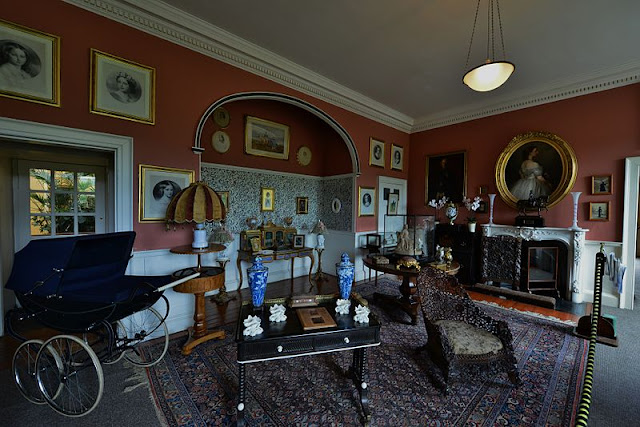 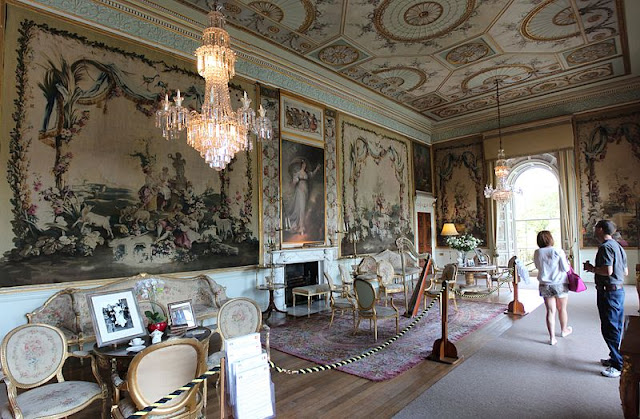 Those who visited Inverary Castle could not help but fall for the castle’s singular beauty, as well as the surrounding’s serene setting. American historian and Hispanic William Hicking Prescott, who was a guest of the Lord Landsdown, the Duke and Northumberland and the Duke of Argylle, stayed for a week at Inveraray Castle. As Peter O. Koch wrote: "Each day of this extended visit was filled with social gatherings that revolved around bountiful feasts, entertaining music, and graceful dancing,” which Prescott found "delightful" but also "tiresome."  [1]

Charles Kingsley, the renowned 19th century reformist and historian, also stayed at Inveraray Castle and describing the surrounding as "the loveliest spot I ever saw—large lawns and enormous timber on the shores of a salt-water loch, with moor and mountain before and behind." No doubt, the castle’s breath taking surrounding beholds inspiration to thrive. [2] 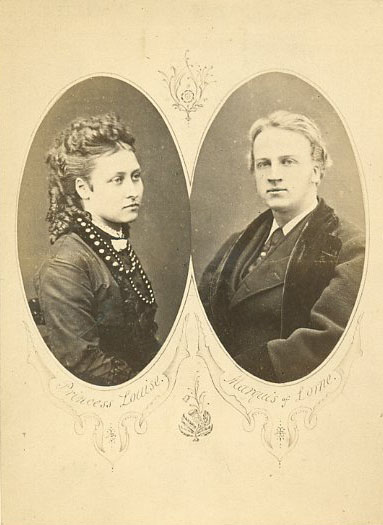 In 1871, Princess Louise, Queen Victoria’s sixth child, married John Campbell, Marquess Lorne and the heir to the Dukedom of Argyll. The marriage was a breach in royal tradition; no daughter of a monarch had previously married a subject since Mary Tudor married the Duke of Suffolk in 1515. Despite initial opposition from the princess’ brother, the Prince of Wales, Queen Victoria consented to the marriage, believing Lorne would bring “new blood” to a family that was accustomed to allowing cousins and kins to marry one another. As a wedding gift, the queen gave her daughter a Maplewood desk, which the new Marchioness of Lorne brought with her to Inveraray Castle.

In 1875, Queen Victoria visited Inveraray Castle. The walks and drives around the estate were much admired, bringing considerable enjoyment to the Queen. Her presence, however, was a cause of  embarrassment for her daughter. She offended everyone by "peremptorily treating the Argylls' home as though it was her own and the family as her servants." [3] As a gesture of thanks to her hosts She gave the 8th Duke a gilt cup and cover which was placed at the center of the family’s dining table.

In 1877, a fire struck and damaged Inveraray Castle. Architect Anthony Salvin was  commissioned to repair and improve damaged building. A third floor was added, as well as the iconic corner towers with their conical roofs. Since then, the castle has housed the treasures that the Campbells have acquired for generations. These treasurers were displayed on the castle's halls and salons, including their French and Flemish tapestries.

At the turn of the 20th century, maintaining Inveraray Castle, turned out as financial burden -  a case that the Duke of Argyll shared with other peers. With the family's declining income from their agricultural lands and enactment of inheritance law, it was difficult to come by and Duke and Duchess Argyll survived by economizing. In fact, Princess Louise avoided inviting the King to Inveraray. Also, a sign of the family’s declining fortunes was revealed by their shrinking number of servants; when Queen Victoria visited the house before Lorne became Duke, the family employed about seventy servants and they seventy-four dogs; by the time Edward VII succeeded to the throne, they only four servants and two dogs.

Another fire devastated Inveraray Castle in 1975 that Ian Campbell, 12th Duke of Argyll, and his family lived in the castle’s basement while restorations were ongoing. A worldwide fundraising drive was carried out for the said rehabilitation.


The Castle’s Tapestry Drawing Room boasts of an elaborate 1773 ceilings made out of papier maché as well as original Beauvais tapestries that are still in their original setting.

Home to the tallest chamber in all of Scotland, the castle’s Armory Hall rises 21 meters and every surface is embellished with displays of weapons that go as far back as the 16th century to the Victorian era. One of the most interesting items found in here is a dagger and sporran that once belonged to Scottish outlaw turned hero Rob Roy MacGregor

The castle sits on a 16-acre garden and an estate that spread up to 60,000 acres. The garden is one the estate’s top attractions regardless of the season. The daffodils, which thrive every Easter, cover the “policies” (a Scottish term for improved grounds that surround a country house) providing a profusion of colours—shades of yellow that turn to vibrant reds, pinks and whites of the rhododendrons and azaleas that the West Highlands are famous for. The castle’s gardens are also home to a variety of heathers, roses and varied trees that serve as considerable attractions every summer and autumn.

The Duke of Argyll and his family continues to reside in the castle where they maintain private apartments that occupy two floors. The 2012 Christmas episode of Downtown Abbey was partly filmed in Inveraray Castle, portraying the fictional Duneagle Castle. The Castle also hosts the annual “Best of the West” festival, organized by the Duchess of Argyll and which takes place September each year.

Learn more about Inveraray Castle on their website https://www.inveraray-castle.com/clan-campbell/the-clan-campbell . 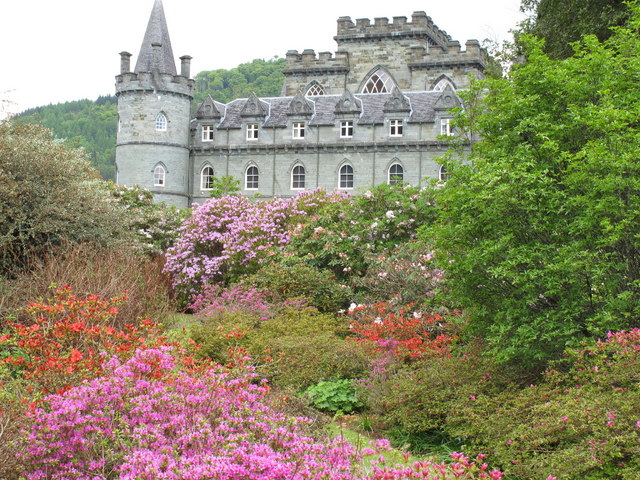 July 11, 2018
Princesses Qajar: Princess 'Esmat  (left) and Princess Fatemah of Persia (right).  A Persian princess viral news websites baptized as Princess Qajar has lately become a stuff of legends. She was presented as a royal lady with a facial hair that made her so attracted that 13 men claimed their own lives because she couldn’t love them. The truth is, there was no “Princess Qajar,” only the Qajar dynasty  that ruled over Persia for more than a century. The only fact about this historical meme is that at that time, it was fashionable for Persian women to wear mustache. “Many Persian-language sources, as well as photographs, from the nineteenth century confirm that Qajar women sported a thin mustache, or more accurately a soft down, as a sign of beauty,” explained Dr. Afsaneh Najmabadi. The memes and fake stories circulating online refer not to a single princess, but actually to two female dynasts: Princess Fatemah Khanum"'Esmat al-Dowleh" and her half-sister
113 comments
Read more....

September 22, 2017
Queen Elizabeth II. Image: Flickr Queen Elizabeth II is a stickler for order, and so routine is a part of Her Majesty’s day-to-day life. She rises at around 8.30 am and would be greeted by a piper who plays at 9am on the terrace beneath her apartment at Buckingham Palace. When longtime attendant and confidante Margaret MacDonald was still in service, Don Coolican noted that  Bobo, as The Queen affectionately called MacDonald, would awaken her, “bringing in a cup of tea and a plate of biscuits handed over by the footman.” The Queen’s corgis are the first creatures to grace The Queen , who would also beg to be given biscuits, Coolican writes.
31 comments
Read more....

September 08, 2016
Queen Alexandra’s singular beauty and charm endeared her to the British people the moment she stepped foot on the English soil in 1863. In fact, the arrival of the Sea King’s daughter was anticipated as it was celebrated that Tennyson penned a poem for her, “A Welcome to Alexandra.”
27 comments
Read more....