You have reached the cached page for https://royal-splendor.blogspot.com/2015/01/prince-philip-duke-of-edinburgh.html
Below is a snapshot of the Web page as it appeared on 12/30/2020 (the last time our crawler visited it). This is the version of the page that was used for ranking your search results. The page may have changed since we last cached it. To see what might have changed (without the highlights), go to the current page.
You searched for: +valdemar iv duke of schleswig 2017 2018 calendar We have highlighted matching words that appear in the page below.
Bing is not responsible for the content of this page.
Royal Profile: Prince Philip, Duke of Ediburgh Skip to main content 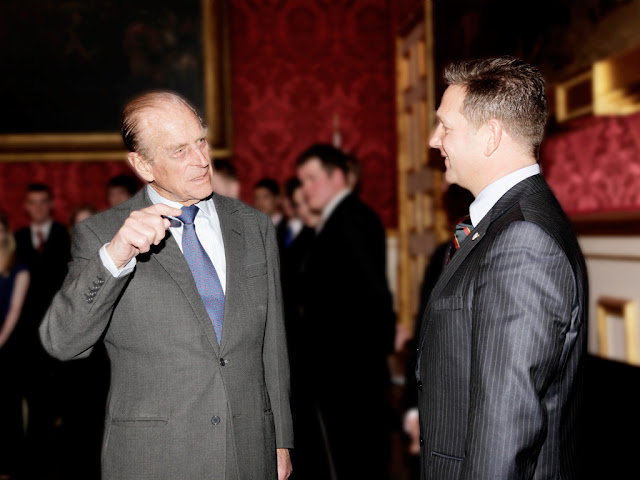 The early life of Prince Philip was so full of hardships and tragedies. Born to a family that, by royal standards, was on the brink of poverty, Prince Philip endured a homeless existence until he married Princess Elizabeth, who later on ascended the British throne as Elizabeth II. His life was so full of struggle, of an aimless search for a true home, and the determination to remain steadfast despite the changes of time and his uneasy relationship with the press, who always criticized, if not mocked him, for his straight-forward attitude and acerbic frankness.

One housekeeper once remarked that Prince Philip’s family “were as poor as a church mice.” Agnes Blower, who served the Prince’s family, said this when she first allowed a reporter to inspect her photograph album in 1962.

Preparations for the birth of Prince Philip were modest enough. The local doctor was summoned to attend the delivery. He soon decided that Alice’s bedroom in the villa Mon Repos was not suitable for the birth, bodily carried her downstairs, and put her on the large diningroom table. Apparently, Alice’s high state of anxiety, double intensified by Andrew having recently left on active service, rendered the table more suitable than a bed-though the medical reasons for this decision were not entirely clear.

Assisted by Nurse Roose, and with her two elder daughters, age 16 and 15, available to help, Alice gave birth to a healthy, well-formed boy, with tiny wisps of very fair hair. This successful delivery was certainly the first, and the very probably last, time that a future consort to the British monarch has been born on a diningroom table. At the very least, it offers us an interesting contrast with the more luxurious circumstances of the births of Philip’s own children.

The birth of the boy brought joy to Prince Andrew and as something of a relief to the Greek royal family in which female progeny had recently heavily outnumbered male offspring. Not only did Andrew now have a son and an heir, but Philip immediately became sixth in line of succession to the Greek throne.

Since the Julian calendar was still in force in Greece, the actual date of Prince Philip’s birth, as stated, was May 28, 1921. Only when Greece adopted the Gregorian calendar two years later was the date amended –put forward 13 days—to June 10, which has ever since been Prince Philip’s official birthday.

Prince Philip’s mother, Princess Alice, played no part in his son’s adolescence. She suffered a breakdown, which was believed to be triggered by her menopause, and was sent for treatment in Vienna, Berlin and later on Switzerland. By 1931, her sisters had married off to German royalty: Princess Sophie to Prince Christopher of Hesse; Princess Theodora to Berthold, Margrave of Baden; and Cecile to George Donatus, Grand Duke of Hesse. Prince Philip was sent for preparatory education to Cheam , then to Schloss Salem in Germany, before he proceeded to Gordonstoun.
After Gordonstoun, Prince Philip joined the Royal Navy in 1939, where he graduated from the Royal Naval College, Dartmouth, as the top cadet in his course in 1940.

The Prince did active service during World War II. In 1940, he was commissioned as a midshipman of the HMS Ramillies, which defended convoys of the Australian Expeditionary Force in the Indian Ocean, transferring to HMS Valiant in the Mediterranean following Italy’s invasion of Greece in 1940. He rose to the rank of lieutenant in 1942, and later first lieutenant of HMS Wallace, becoming one of the youngest in the Royal Navy, where he was second in command at the time the ship joined in the invasion of Sicily, in July 1943. He eventually saved the ship from a night bomber attack. The following year, he was transferred to HMS Whelp, which was part of the British Pacific Fleet in the 27th Destroyer Flotilla. The prince was in Tokyo Bay when the Japanese surrender, ending the war in the Pacific.

Prince Philip and then-Princess Elizabeth got to know each other in 1939, when King George VI, who was then on a tour at the Royal Naval College in Dartmouth with Queen Elizabeth, and Philip’s uncle Earl Mountbatten, asked him to escort Elizabeth and her sister Margaret. Elizabeth fell in love with Philip and they started to exchange letters.

Prince Philip was 25 when he returned to England in 1946, a handsome, experienced naval officer, who was intensely attractive to women. That summer, Philip sought for the princess’ hands. King George VI granted his request, although their engagement did not take place until Elizabeth turned 21.

One of the heated discussions then was Prince Philip’s naturalization as a British subject and the following controversy as to what his new name would be. The family name of the Danish Royal House  which his father was descended was Schleswig-Holstein-Sondenburg-Glucksberg, was not just an absolute tongue-twisting, but also utterly foreign, thus, defeating the purpose of his nationalization. The College of Heralds suggested that he take instead the name Oldcastle. In the end, it was agreed that he take his mother’s maiden name, Battenberg, for which the Anglicized form of Mountbatten already existed. On March 18, Prince Philip simply became Lieutenant Philip Mountbatten, RN. It was only later that it was discovered that the whole process had been entirely unnecessary, as a descendant of Electress Sophia, he was and had been, de facto, a British subject.
The engagement was made known to the public on July 10, 1947. Three days before their wedding, King George VI granted Philip the style Royal Highness, elevating him to Duke of Edinburgh, Earl of Merioneth, and Baron Greenwich of Greenwich in the County of London, on their wedding day. Their marriage, held at Westminster Abbey, was recorded and broadcast by BBC radio to 200 million people around the world. Because anti-German sentiments following World War II was still high, it was decided that the royal family’s German relations, including Philip’s three sisters who married into German husbands and Nazi sympathizers, should be invited.

The couple took up residence at Clarence House. Their first two children were born: Prince Charles in 1948 and Princess Anne in 1950. Two more would follow: Prince Andrew in 1960 and Prince Edward in 1964.

Prince Philip immediately resumed his naval career after their wedding. He was promoted lieutenant commander in 1950 and commander in 1952 before he retired from service to assume a more active role as consort to the sovereign.

Prince Philip and Princess Elizabeth have just embarked on a Commonwealth tour in January 1952 when news of King George VI’s death reached them in Kenya on February 6. Philip told the new queen of the king’s death at Sagana Lodge, cutting their trip short.

The accession of Elizabeth to the throne ushered in the issue of what to call the royal house. Lord Mountbatten backed the idea of the name House of Mountbatten, however, Queen Elizabeth II’s grandmother, Queen Mary, objected and informed the Prime Minister Winston Churchill that the royal house  should remain as House of Windsor.

"I am nothing but a bloody amoeba. I am the only man in the country not allowed to give his name to his own children,” the duke was said to have complained privately.

In 1957, Queen Elizabeth II elevated the duke’s status as Prince of the United Kingdom and has since then been known as "His Royal Highness The Prince Philip, Duke of Edinburgh."

In 1960, with Queen Mary dead and Churchill no longer prime minister, the Queen declared that male-line descendants of the Duke and the Queen who are not styled as Royal Highness, or titled as Prince or Princess, would bear the name Mountbatten-Windsor.

Likewise, the Queen made clear of the Duke of Edinburgh’s position in the court. The duke was to have "place, pre-eminence and precedence" next to her "on all occasions and in all meetings, except where otherwise provided by Act of Parliament".

Prince Philip has been and remains a constant support and companion to Queen Elizabeth II on all her engagements, tours and state visits, while actively supporting his causes and carrying out commitments for charities and causes close to his heart.

In 1956, together with Kurt Hahn, he launched the Duke of Edinburgh's Award, which gives young people "a sense of responsibility to themselves and their communities".

The prince serves as patron or president of some 800 organizations, particularly those that advocate scientific and technological research and development, sport, youth, environment.

As an advocate of industry, the prince has toured and visited coalmines and factories, engineering works and industrial plants with the aim of supporting the constant development and improvement of British industrial life. Likewise, the Prince’s concern for the environment could never be disregarded. He has embarked on a trip to Antarctica and the South Atlantic in 1956-57,  and has exerted extra effort in spreading awareness on the need for humanity to care for the environment.

In June 2011, on the occasion of his 90th birthday, announced his intention to reduce his duties, stating that he had "done [his] bit." As a 90th birthday gift, Queen Elizabeth II declared him Lord High Admiral.

Prince Philip is currently the longest-lived male member of the British royal family, as well as the longest-serving and oldest-ever consort of a British sovereign.

July 11, 2018
Princesses Qajar: Princess 'Esmat  (left) and Princess Fatemah of Persia (right).  A Persian princess viral news websites baptized as Princess Qajar has lately become a stuff of legends. She was presented as a royal lady with a facial hair that made her so attracted that 13 men claimed their own lives because she couldn’t love them. The truth is, there was no “Princess Qajar,” only the Qajar dynasty  that ruled over Persia for more than a century. The only fact about this historical meme is that at that time, it was fashionable for Persian women to wear mustache. “Many Persian-language sources, as well as photographs, from the nineteenth century confirm that Qajar women sported a thin mustache, or more accurately a soft down, as a sign of beauty,” explained Dr. Afsaneh Najmabadi. The memes and fake stories circulating online refer not to a single princess, but actually to two female dynasts: Princess Fatemah Khanum"'Esmat al-Dowleh" and her half-sister
68 comments
Read more....

September 22, 2017
Queen Elizabeth II. Image: Flickr Queen Elizabeth II is a stickler for order, and so routine is a part of Her Majesty’s day-to-day life. She rises at around 8.30 am and would be greeted by a piper who plays at 9am on the terrace beneath her apartment at Buckingham Palace. When longtime attendant and confidante Margaret MacDonald was still in service, Don Coolican noted that  Bobo, as The Queen affectionately called MacDonald, would awaken her, “bringing in a cup of tea and a plate of biscuits handed over by the footman.” The Queen’s corgis are the first creatures to grace The Queen , who would also beg to be given biscuits, Coolican writes.
10 comments
Read more....

September 08, 2016
Queen Alexandra’s singular beauty and charm endeared her to the British people the moment she stepped foot on the English soil in 1863. In fact, the arrival of the Sea King’s daughter was anticipated as it was celebrated that Tennyson penned a poem for her, “A Welcome to Alexandra.”
14 comments
Read more....