You have reached the cached page for https://royal-splendor.blogspot.com/2014/10/queen-elizabeth-ii-and-her-royal.html
Below is a snapshot of the Web page as it appeared on 12/29/2020 (the last time our crawler visited it). This is the version of the page that was used for ranking your search results. The page may have changed since we last cached it. To see what might have changed (without the highlights), go to the current page.
You searched for: +valdemar iv duke of schleswig 2017 2018 calendar We have highlighted matching words that appear in the page below.
Bing is not responsible for the content of this page.
Queen Elizabeth II and her Royal Residences Skip to main content

The Queen and the Prince Philip use five different houses throughout the year- Buckingham Palace, Windsor Castle, the Palace of Holyroodhouse, Balmoral Castle and Sandringham House. Of these only Balmoral and Sandringham are privately owned and maintained, and passed by will through the generations, although King George VI had to buy out his elder brother Edward VIII on the latter's abdication in 1936. The first two are the official London residence and the official country residence of the monarch, and the Palace of Holyroodhouse is the official residence of the monarch in Scotland.


Other palaces and houses- St James's Palace (still the 'senior' palace, the Court of St James's, the official name for the British court, it administered from there), Clarence House, Marlborough House Mews, Kensington Palace, the Royal Mews and Paddocks at Hampton Court and buildings in the Home and Great Parks at Windsor, are used by members of the royal family as houses and as offices for the Royal Household. The residential and office areas of these various buildings, together with the official residences in England, are all maintained by annul a funding provided by the government to the Royal Household. The government in turn receives any revenues from this 'Estate', which comprises a staggering 360 individual buildings spread over 160, 000 square metres (1.7 million square feet), plus a further 280 properties used mainly as residential quarters for staff and pensioners.


The official residences are also known as the 'Occupied Royal Palaces', or the 'Estate' for short, distinguish them from the palaces that are no longer official residences- the Palaces of Westminster and Whitehall (all that remains is the Banqueting House where King Charles I was executed in 1649), Hampton Court and Her Majesty's Royal Palace and Fortress, more commonly known as the Tower of London. The official residences are held in trust for the nation by the Queen as sovereign and are used by her in fulfilling the role and functions of head of the state- and that less definable but vitally important description 'head of the nation' that describes the emotional power of the monarchy- and by other members of the royal family in a support role. To ensure the Royal Household is run flawlessly and the vast Estate is kept in good order, over 1000 people work in occupied palaces.


The Queen's role as head of state over more than 60 years has been epic in scale. Every year she invites the current crop of ambassadors and high commissioners, together with senior diplomats and their spouses or partners- around a thousand people- to the largest event held indoors in her yearly calendar, The Queen's Diplomatic Reception at Buckingham Palace. Drinks are served in the Picture Gallery followed by a buffet supper in the Ballroom and then dancing in the Ball Supper Room.

The Queen also host two 'Inward State Visits' a year when guests are invited to stay at Windsor Castle or Buckingham Palace, which is also the venue for the other mass receptions, most of the annual investiture ceremonies and at least three great garden parties whose nast numbers dwarf any of the other receptions. Each year, 2500 people are granted honours and the Queen has held over 600 investitures, usually in Buckingham Palace ballroom but now also at Windsor Castle. Each of the garden parties is attended by 8000 people- millions have attended over the course of her reign. The annual garden party at Holyroodhouse at the end of June during her week- long stay at the palace is even larger- up to 10, 000 guests through the lawns.


The Queen moves between her different houses in a set routine. Every week while in London she leaves Buckingham Palace on Friday afternoon for Windsor and returns from Windsor Castle after lunch on Monday. To avoid a terrorist attack (alas always come thing to worry about), her route varies and a tracking device is fitted to her car. This is monitored by the police post at Buckingham Palace for any deviation from the planned route.

The annual routine starts around 20 December when, after a lunch party for her extended family (around 50 of them), The Queen takes over a first-class compartment on a morning train from King's Cross to King's Lynn. The famous Royal Station at Wolferton was closed in 1969, so a car now meets The Queen at King's Lynn station and takes her on the short drive to Sandringham. There she stays for six weeks, presiding over a large family gathering plus house guests. The latter are treated to legendary hospitality, down to the provision of 'wellies' of the correct size for each guest. Accession Day, the anniversary of the death of The Queen's father, King George VI, and her own accession to the throne, is 6 February, which usually marks her last day at Sandringham before the return to London and the beginning of a new round of investitures, audiences, a full diary of other engagements and a lot more handshaking.


For four weeks of the year, around Easter, The Queen moves full-time with her staff to Windsor Castle, known as 'Easter Court'. During this period, in a tradition begun by Queen Victoria, distinguished guests are invited to 'Dine and Sleep' at the castle. The 'sleep' part is no more, but guests still dine with the sovereign. On Easter Sunday the Queen always attends the morning service at St George's Chapel. At Windsor, she also celebrates her birthday on 21 April, privately) her 'official birthday' is celebrated around the middle of June, a tradition begun in 1908 by King Edward VII whose November birthday parade was inevitably beset by bad weather).

The State Opening of Parliament, which formerly occurred in November, has since 2010 and the innovation of fixed-term parliaments, taken place in May. Escorted from Buckingham Palace by the Household Cavalry The Queen dons the 18-foot-long Robe of State and the Imperial State Crown and is preceded by a gentleman usher carrying the Great Sword of State, all symbols of royal authority. This is the only regular occasion when all three constituents parts of Parliament, the sovereign, the House of Lords and the House of Commons, meet on the site of the old Whitehall Palace to mark the formal start of the new parliamentary year.

The Queen is in residence again at Windsor in June, which coincides with the Royal Ascot racehorse meeting- which she has attended every year since 1945- and the Garter Day ceremonies when the recipients of the Order of the Garter gather to lunch in the Waterloo Chamber and process in their robes to St George's Chapel.

Holyrood Week takes place at the end of June or beginning of July when the Queen is in official residence at the Palace of Holyroodhouse and presides over the investiture ceremony and the great garden party. The Queen also attends a wide range of other engagements in Scotland including the service for the holders of the Order of the Thistle at St Giles' Cathedral. Her arrival at the palace is always marked by the Ceremony of the Keys when the Lord Provost of Edinburgh hands her keys to the city and bids her welcome to 'your ancient and hereditary kingdom of Scotland'. One Hopes that this will continue. At the end of July she and her household, and the few remaining corgis, are again in Scotland, at Balmoral Castle, where she spends the whole of August and September before returning to Buckingham Palace, with weekends at Windsor Castle.

The description of the role of the sovereign on The Queen's official website explains that she 'acts as a focus for national identity, unity and pride; gives a sense of stability and continuity; officially recognises success and excellence'.

Few would argue that Queen Elizabeth II has not lived up to that description. It is also clear to see that the sense of national identity, stability and continuity are assisted by the embodied in the great official palaces and private residencies that have been for so long the backdrop to that affairs of state and refuges from the 'press and pestilence' of London life. They remain a sanctuary to the sovereign and a symbol of a country's standing in the world, especially in the increasing turbulent and unpredictable years of the twenty-first century.

This is the excerpt from the book The Queen's Houses by Alan Titchmarsh. Visit the link

or click the image below to grab a copy of this very interesting, poignant and enriching book. 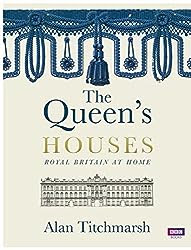 July 11, 2018
Princesses Qajar: Princess 'Esmat  (left) and Princess Fatemah of Persia (right).  A Persian princess viral news websites baptized as Princess Qajar has lately become a stuff of legends. She was presented as a royal lady with a facial hair that made her so attracted that 13 men claimed their own lives because she couldn’t love them. The truth is, there was no “Princess Qajar,” only the Qajar dynasty  that ruled over Persia for more than a century. The only fact about this historical meme is that at that time, it was fashionable for Persian women to wear mustache. “Many Persian-language sources, as well as photographs, from the nineteenth century confirm that Qajar women sported a thin mustache, or more accurately a soft down, as a sign of beauty,” explained Dr. Afsaneh Najmabadi. The memes and fake stories circulating online refer not to a single princess, but actually to two female dynasts: Princess Fatemah Khanum"'Esmat al-Dowleh" and her half-sister
68 comments
Read more....

September 22, 2017
Queen Elizabeth II. Image: Flickr Queen Elizabeth II is a stickler for order, and so routine is a part of Her Majesty’s day-to-day life. She rises at around 8.30 am and would be greeted by a piper who plays at 9am on the terrace beneath her apartment at Buckingham Palace. When longtime attendant and confidante Margaret MacDonald was still in service, Don Coolican noted that  Bobo, as The Queen affectionately called MacDonald, would awaken her, “bringing in a cup of tea and a plate of biscuits handed over by the footman.” The Queen’s corgis are the first creatures to grace The Queen , who would also beg to be given biscuits, Coolican writes.
10 comments
Read more....

September 08, 2016
Queen Alexandra’s singular beauty and charm endeared her to the British people the moment she stepped foot on the English soil in 1863. In fact, the arrival of the Sea King’s daughter was anticipated as it was celebrated that Tennyson penned a poem for her, “A Welcome to Alexandra.”
14 comments
Read more....