You have reached the cached page for https://www.christianitytoday.com/ct/2012/september-web-only/unconditional.html
Below is a snapshot of the Web page as it appeared on 1/14/2021 (the last time our crawler visited it). This is the version of the page that was used for ranking your search results. The page may have changed since we last cached it. To see what might have changed (without the highlights), go to the current page.
You searched for: +unconditional movie christian review We have highlighted matching words that appear in the page below.
Bing is not responsible for the content of this page.
Unconditional | Christianity Today
Explore
Jump directly to the Content
true
Reviews

A woman overcomes tragic loss by learning to love and forgive in unexpected ways.
Russ Breimeier|September 21, 2012
Our Rating

The dramatic opening of Unconditional intercuts three perilous scenarios during a late night rainstorm. A woman suffering from depression sits in her car alone, preparing to shove a pistol into her mouth. An inner-city boy is shoplifting at a nearby store with his younger sister. And a man at home trembles as he scrambles to pump himself full of drugs.

But things are not quite as they appear. These ostensibly unconnected lives intersect much like 2006's Best Picture Winner Crash. And this is actually a Christian film—a surprisingly good one, for that matter.

The woman, Samantha, is an up-and-coming children's book author played by Lynn Collins (John Carter, X-Men Origins: Wolverine). The film's effective prologue makes clever use of animation to explain how her husband Billy was killed in a street shooting, giving us the basics without showing the violence per se. In the months since, the grieving Sam has lost her faith and the will to live.

Preparing to kill herself, Sam hears screams down the street. A young girl, Keisha, has been hit by a car after chasing her older brother Macon into the street while fleeing the store he just robbed. Macon pleads for Sam to help, and she takes them to a nearby hospital.

Keisha ends up just fine, and the hospital calls one of the kids' contacts, and it's Joe (Barbershop's Michael Ealy), the man we saw supposedly shooting up in the first scene—when he was, in fact, working with a dialysis machine to treat a severe kidney disease. In the midst of his anguish, he prays for the safety of the kids, who are part of his inner-city youth group. It also turns out that Joe and Sam were close childhood friends, reconnecting through happenstance at the hospital.

You have reached the end of this Article Preview 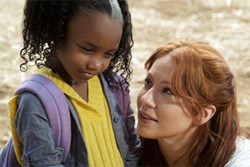 Subscribe to Christianity Today to continue reading this article from CT's digital archives.

Unlock This Article for a Friend

To unlock this article for your friends, use any of the social share buttons on our site, or simply copy the link below.

To share this article with your friends, use any of the social share buttons on our site, or simply copy the link below.