You have reached the cached page for https://www.rottentomatoes.com/m/blumhouses_truth_or_dare
Below is a snapshot of the Web page as it appeared on 4/13/2021 (the last time our crawler visited it). This is the version of the page that was used for ranking your search results. The page may have changed since we last cached it. To see what might have changed (without the highlights), go to the current page.
You searched for: +truth or dare movie We have highlighted matching words that appear in the page below.
Bing is not responsible for the content of this page.
Blumhouse's Truth or Dare (2018) - Rotten Tomatoes
Home
Top Box Office
Tickets & Showtimes
DVD & Streaming
TV
News 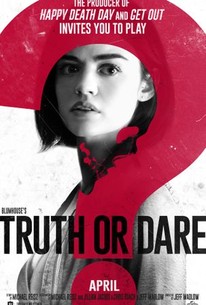 Truth or Dare's slick presentation isn't enough to make this mediocre horror outing much more frightening than an average round of the real-life game. Read critic reviews

Truth or Dare: Official Clip - Dare You to Kill

Truth or Dare: Official Clip - Living Life On The Edge

Truth or Dare: Official Clip - The Pen Is Mightier

Truth or Dare: Official Clip - The Truth of The Game

Truth or Dare: Official Clip - Cut Out Your Tongue!

Olivia, Lucas and a group of their college friends travel to Mexico for one last getaway before graduation. While there, a stranger convinces one of the students to play a seemingly harmless game of truth or dare with the others. Once the game starts, it awakens something evil -- a demon which forces the friends to share dark secrets and confront their deepest fears. The rules are simple but wicked -- tell the truth or die, do the dare or die, and if you stop playing, you die.