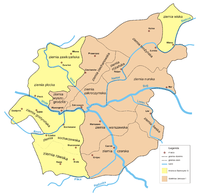 Siemowit IV was a son of Siemowit III. After the death of Louis I of Hungary he was one of the pretenders to the Polish throne. In 1383 he conquered Cuyavia, but was soon expelled by the joint forces of szlachta from Lesser Poland and armies of Hungary. In 1386 he accepted the rule of King of Poland Jadwiga of Poland and her king consort Grand Duke of Lithuania Władysław II Jagiełło and became a hereditary vassal of Poland. The following year he married the sister of the Polish king-consort, Aleksandra, and received the land of Bełz.

He lost much of his domain to the Teutonic Order, including Wizna, Zawkrze and Płońsk. To get it back, he took part in the war of 1409–1410 between Poland, Lithuania and the Teutonic Order. During the Battle of Grunwald he fielded three banners of his own troops, fighting alongside the 'Royal' Poles.

He had 5 sons (prince Siemowit V of Masovia, prince Kazimierz II of Belz, prince Trojden II, prince Władysław I of Plock,and future bishop Alexander Ziemowit), and 7 daughters with Alexandra and their 6 daughters married European princes and feudal lords: Bogislaw IX (Maria or Mary of Masovia), Ernest the Iron( Cymburgis of Masovia), Bolesław I of Cieszyn (Euphemia or Ofka), Wilhelm II. der Reiche (Amelia of Masovia), Michael Žygimantaitis (Katarzyna or Catherine of Masovia ), János Garai (Jadwiga of Masovia ), while his grandson was Frederick III, Holy Roman Emperor and his granddaughter was Dorothy Garai, Queen of Bosnia.

All translations of siemowit iv duke of masovia