You have reached the cached page for https://pagesix.com/2020/06/17/michelle-williams-and-thomas-kail-welcome-first-child-together/
Below is a snapshot of the Web page as it appeared on 1/17/2021 (the last time our crawler visited it). This is the version of the page that was used for ranking your search results. The page may have changed since we last cached it. To see what might have changed (without the highlights), go to the current page.
You searched for: +thomas kail We have highlighted matching words that appear in the page below.
Bing is not responsible for the content of this page.
Michelle Williams and Thomas Kail welcome first child together Skip to main content 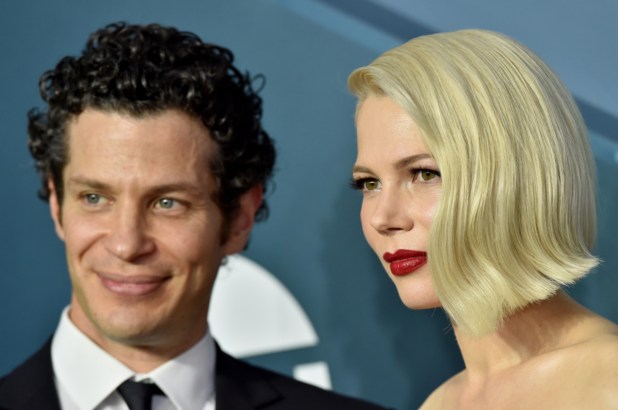 Congratulations are in order for Michelle Williams and Thomas Kail.

The two have just welcomed their first child together, Us Weekly is reporting. It’s the actress’ second child and her first with Kail. (Her daughter with Heath Ledger, Matilda, is 14-years-old.)

Kail and Williams were snapped out and about in NYC in March wearing wedding rings shortly before the city went into lockdown, though a rep declined to confirm that they’d tied the knot at the time.

Williams, 39, revealed her baby bump at the Golden Globes in January, where, upon winning for her role in “Fosse/Verdon” (directed by Kail, 42), she made an impassioned speech in support of abortion rights, saying, “I wouldn’t have been able to do this without employing a woman’s right to choose, to choose when to have my children and with whom.”

News of Kail (who also directed productions of “Hamilton” and Lin-Manuel Miranda’s other musical “In the Heights” on Broadway) and Williams’ relationship broke in December 2019. Previously, the actress had been married to indie rocker Phil Elverum, who performs as Mount Eerie.

A typically cheery People magazine profile of Williams seemingly elided the suspicious timeline of Williams’ separation from Elverum and subsequent relationship with Kail: Both were in serious relationships — Williams with Elverum and Kail with actress Angela Christian — when they met filming “Fosse/Verdon” between November 2018 and March 2019. Williams reportedly split with Elverum in “early 2019;” it’s unclear when Kail and Christian broke up.

Reps for Williams didn’t get back to us.