You have reached the cached page for https://www.amazon.com/Young-Savages-Blu-ray-Burt-Lancaster/dp/B00LC4PF0S
Below is a snapshot of the Web page as it appeared on 10/7/2020 (the last time our crawler visited it). This is the version of the page that was used for ranking your search results. The page may have changed since we last cached it. To see what might have changed (without the highlights), go to the current page.
You searched for: +the young savages movie images 2017 We have highlighted matching words that appear in the page below.
Bing is not responsible for the content of this page.
Amazon.com: Young Savages [Blu-ray]: Burt Lancaster, Dina Merrill, Shelley Winters, Telly Savalas, Edward Andrews, John Frankenheimer: Movies & TV 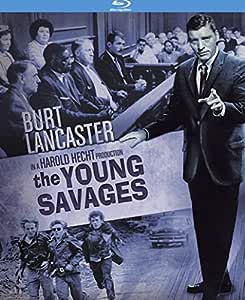 Screen Legend Burt Lancaster (Elmer Gantry) gives a forceful performance as a prosecutor, whose search for the truth puts his career in jeopardy, in this thought-provoking courtroom drama. The Young Savages is set in an East Harlem mired in racial tension and gang violence. While prosecuting the three Italian teens who murdered a 15-year-old blind Puerto Rican boy from a rival gang, Assistant D.A. Hank Bell (Lancaster) learns that there's is more to this case than meets the eye. Wonderfully directed by the great John Frankenheimer (The Manchurian Candidate) and based on Evan Hunter's bestselling novel A Matter of Conviction. The strong supporting cast includes Shelley Winters, Dina Merrill, Edward Andrews and Telly Savalas.

3.9 out of 5 stars
3.9 out of 5
64 global ratings
How are ratings calculated?
To calculate the overall star rating and percentage breakdown by star, we don’t use a simple average. Instead, our system considers things like how recent a review is and if the reviewer bought the item on Amazon. It also analyzes reviews to verify trustworthiness.
Top reviews

Eric Warren
VINE VOICE
4.0 out of 5 stars Westside Gory
Reviewed in the United States on November 1, 2016
Verified Purchase
Great, topical drama which shares some DNA with Westside Story, The Blackboard Jungle and others. It is kind of the anti-Westside Story, all teen angst and no music. Burt Lancaster, of course is great. He is especially Natty sporting a pork pie hat. Telly Savalas - the late, great actor - is kind of wasted as Lancaster's co-investigator of a brutal stabbing that appears to be gang-related. One note: apparently John Frankenheimer was a total dick to Dina Merrill. I am a huge Frankeheimer fan, but now slightly less so, knowing that he, like many maie Directors over the years, intimidated a fine actress into wanting to quit acting. Shameful. But he results of his Directorial work are not. Gritty, well acted stuff.
Read more
One person found this helpful
Helpful
Comment Report abuse

Paul A. Klinger
2.0 out of 5 stars Great Promise But Little Results
Reviewed in the United States on October 19, 2017
Verified Purchase
This was a big disappointment. Because I loved "The Scalphunters" in 1968, I figured I would like this film, as it has much of the same cast and production crew. But when I saw the name John Frankenheimer, I became wary, for while he made a couple of great films, most of his work was pedestrian IMO. This one was definitely in that category, where nothing about the film was convincing or particularly involving. The "savages" didn't seem savage enough, and the script was expository. After seeing it, and barely able to finish it, I realized why it is not one of Burt Lancaster's more well known films.
Read more
Helpful
Comment Report abuse

Musicisme
5.0 out of 5 stars Great Film
Reviewed in the United States on August 27, 2017
Verified Purchase
This movie was very good. Thought provoking. I can also see a movie and 2 TV shows that was inspired by this movie. There was a lot of attention paid to detail
and some of the issues addressed in this movie is still prevalent to this day. I highly recommend you see this one. The only thing I didn't like was the abrupt ending.

John Cooney
5.0 out of 5 stars TRUE STORY
Reviewed in the United States on January 19, 2013
Verified Purchase
This is based on a true story of a murder in NYC that was the result of two ethnic gangs fighting. John Frankenheimer proved early on that he would become a legendary Director in Hollywood. So in awe of Frankenheimer was Burt Lancaster, he asked him to take over The Birdman of Alcatraz direction. Great cast. Don't pass this one up!
Read more
3 people found this helpful
Helpful
Comment Report abuse

Robert T. Asseng Sr.
5.0 out of 5 stars Review, Review, Review!
Reviewed in the United States on March 6, 2006
Verified Purchase
Does anyone know what a review is? A review isn't a long drawn out synopsis of the film! It's the writers opinions of the quality of the film and certain aspects of it. This film is one of the stand out films of the late fifties and early sixties that dealt with social commentary of the times. Burt Lancaster who is usually considered a very good B actor, but gives a stellar A+ performance. It is a very well done gritty crime drama of gang violence in New York City of the time. This film has a really good story and plot, and a good twist at the end. It ranks right up there with films of the period such as; 12 Angry Men, Inherit the Wind and many others. If you like Burt Lancaster, Well written and acted dramas from the fifties and sixties, then get this film!
Read more
4 people found this helpful
Helpful
Comment Report abuse

jimi
4.0 out of 5 stars YOUNG SAVAGES OPENS A NEW ERA IN AMERICA
Reviewed in the United States on October 28, 2014
Verified Purchase
GOOD FILM WITH GREAT ACTORS...FILM EXHIBITS THE 1960'S PUSH FOR CULTURAL AND RACIST RECOGNITION IN AMERICA... FILM COULD DEVELOP ITS THEME MORE BUT OVER ALL DOES A GOOD ATTEMPT...ALSO GOOD SHOTS OF NEW YORK CITY AND THE DIVERSITY OF CULTURES WHICH INHABIT IT A FILM WORTH SEEING
Read more
Helpful
Comment Report abuse

Victor Malyar
5.0 out of 5 stars forever young
Reviewed in the United States on February 9, 2014
Verified Purchase
An excellent film. Full of action and mystery, starring burt Lancaster and a then unknown Telly Savalas with still some hair left. Lancaster plays a prosecutor investigating a murder case in which three members of an Italian Street gang are accused of a hate crime that could put them on the electric chair in 1960 Harlem even though they are all under 18. Telly Savalas plays a detective who believes all of the accused are guilty. It is later revealed that the victim was a gang leader who played the blind man's bluff and the youngest defendant did not stab the victim, he only hit him with the blade handle. As a result all three defendants were saved from the death penalty, the oldest got 20 years, the second who went by the nickname batman was committed to an asylum until he is believed legally sane and the youngest defendant got one year in reform school.
Read more
2 people found this helpful
Helpful
Comment Report abuse
See all reviews

Paola Zuffinetti
5.0 out of 5 stars It has all the sap of its time!
Reviewed in the United Kingdom on September 13, 2018
Verified Purchase
I first watched it on sky cinema and I recorded it, but, as time went by, I decided to have my own DVD for perfect viewing. And I am elated it just arrived minutes ago from Amazon uk! What makes it one of my favourites is the plot, the location and the movie stars. Among all the others, Dina Merrill shines in all her refined beauty and expertise, on the same level of Grace Kelly, although, to me, much less known here in Italy. The movie captures superbly the social atmosphere of the New York in that section. Worth having!
Read more
2 people found this helpful
Report abuse

Marc
5.0 out of 5 stars Good dvd.
Reviewed in the United Kingdom on December 21, 2019
Verified Purchase
Very strong movie
Lancaster is so big actor !

Zdenek Hanzlik
4.0 out of 5 stars Very good Movie what American conscience tried to say about itself - ask Ferguson Missouri citizens
Reviewed in the United Kingdom on April 6, 2017
Verified Purchase
Very good Movie and in its time it might be revolutionary .
Read more
Report abuse

Geraldine
1.0 out of 5 stars Poor Seller AND Sound Quality😞
Reviewed in Canada on March 3, 2020
Verified Purchase
The movie was kind of "cheesy" but I bought it mainly to see Telly Savalas in it. He was great as was Burt Lancaster.

Unfortunately the sound went up and down throughout most of the movie, very loud and then very quiet.

The seller was not helpful and expected me to pay return postage. After several emails, I finally gave up. Will not buy from this seller again.👎