You have reached the cached page for https://www.rottentomatoes.com/m/young_savages
Below is a snapshot of the Web page as it appeared on 3/1/2021 (the last time our crawler visited it). This is the version of the page that was used for ranking your search results. The page may have changed since we last cached it. To see what might have changed (without the highlights), go to the current page.
You searched for: +the young savages movie cast We have highlighted matching words that appear in the page below.
Bing is not responsible for the content of this page.
The Young Savages (1961) - Rotten Tomatoes
Home
Top Box Office
Tickets & Showtimes
DVD & Streaming
TV
News 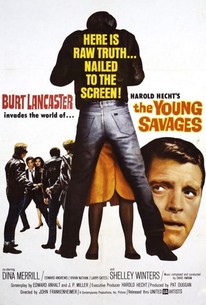 After a Puerto Rican teen is murdered by three white adolescents, the case comes to Assistant District Attorney Hank Bell (Burt Lancaster). Realizing that he used to date the mother (Shelley Winters) of one of the suspects, he wonders if the boy is his son. Despite Bell's personal involvement, the district attorney (Edward Andrews) keeps him on the case. However, as Bell discovers street gang involvement in the case, he and his wife (Dina Merrill) begin to face physical threats.

Critic Reviews for The Young Savages

Audience Reviews for The Young Savages