You have reached the cached page for https://gijoe.fandom.com/wiki/G.I._Joe:_The_Movie
Below is a snapshot of the Web page as it appeared on 11/23/2020 (the last time our crawler visited it). This is the version of the page that was used for ranking your search results. The page may have changed since we last cached it. To see what might have changed (without the highlights), go to the current page.
You searched for: +the hollars movie wiki We have highlighted matching words that appear in the page below.
Bing is not responsible for the content of this page.
G.I. Joe: The Movie - G.I. Joe Wiki - Joepedia - GI Joe, Cobra, toys 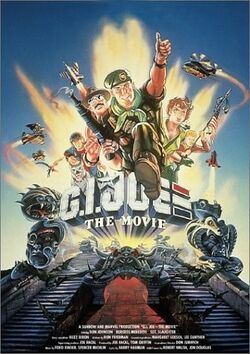 G.I. Joe: The Movie is a 1987 animated film spin-off from the animated series G.I. Joe: A Real American Hero, picking up where the series ended.

Following the previous season's end and a foiled attack on the Statue of Liberty, Serpentor is now in command of Cobra and Cobra Commander schemes to rid himself of his usurper. Pythona fights her way into the Terror Drome and into Serpentor's chambers, where he recognizes her from a suppressed memory. She has him lead Cobra forces in an attempt to steal the Broadcast Energy Transmitter, an experimental energy generator being tested in the Himalayas by G.I. Joe. Despite attacking with a massive force, Cobra is driven off and Serpentor is captured. A small contingent of Joes, led by Roadblock, follow the retreating Cobra forces deep into the Himalayan Mountains, where they are brutally attacked and captured by mysterious creatures with apparent ties to Cobra Commander.

Back at G.I. Joe Headquarters, a new group of rookie Joes - dubbed the Rawhides- are brought onto the team. They endure rigorous training under Beachhead's critical eye. Lt. Falcon is conspicuously absent from training, as he is giving an unauthorized tour of Serpentor's holding facility to an unassuming young woman named Heather (who is Dreadnok Zarana in disguise). Falcon's dereliction of duty is discovered by Duke, and he is placed on guard duty as punishment.

Back in the Himalayas, the majority of Cobra are held as the "guests" of a civilization known as Cobra-La, an ancient race of snake people who wish to destroy human civilization. Golobulus, the supreme ruler of Cobra-La, and his aide, Pythona, explain the history of their race: Cobra-La are the former rulers of Earth, in part due to their advanced scientific knowledge, which allows them to manipulate and convert living creatures into advanced organic technology. Their society however was erased by the onset of an ice age, forcing those few survivors into hiding in caves deep within the Himalayas. Also revealed is that Cobra Commander is a citizen of Cobra-La who was sent out to conquer Earth for them. Due to his miserable success rate, the Commander is to be tried as a criminal and sentenced according to Cobra-La tradition. Golobulus also claims to be Serpentor's true creator, having manipulated Dr. Mindbender's dreams to imbue him with the knowledge and skill to devise Serpentor's creation.

Using information gleaned from her encounter with Falcon, Zarana leads the Dreadnoks, Pythona, and the hulking Nemesis Enforcer to Serpentor's detention facility. Falcon, who is supposed to be monitoring the doors to the facility, is instead harassing fellow Rawhide Jinx in the motor pool. Serpentor is freed and the Cobras escape. Falcon is arrested for abandoning his post.

Golobulus, with Serpentor and all of Cobra at his back, explains his plan to retake Earth: He will launch the same spores that mutated Cobra Commander into orbit, that they may rain down on the planet and degenerate the human species "to the level of mindless beasts." He orders Serpentor to reclaim the BET to aid in the spores' maturation.

Cobra Commander, as punishment for his failure to destroy humanity, is exposed to a strain of mutative spores that slowly transform him into a literal snake. He is then taken to the cell to be placed inside as a warning. The captured Joes attempt to escape Cobra-La once the gate is opened but are subdued by organic booby traps, but only before he manages to catch up to Roadblock, who had narrowly escapes capture with his aid. The two set off into the mountains to find help after he is blinded by Nemesis Enforcer.

At Joe Headquarters, Duke pleads in Falcon's defense, revealing that he is Falcon's half-brother. Rather than be court-martialed, Falcon's punishment consists of an aggressive 'retraining' program at the hands of Sgt. Slaughter. Falcon meets the Sarge's other troops, the Renegades: Mercer, Red Dog and Taurus. At Duke's request, Falcon, Sgt. Slaughter, and the Renegades infiltrate the Cobra Terror Drome on Cobra Island and discover that Cobra plans to make a second attempt to obtain the BET. Despite Falcon being temporarily captured, the Joes escape with their information, and destroy the Terror Drome in the process.

Cobra successfully steals the BET device with the aid of giant serpent-worms and strange aircraft and Duke is critically wounded by Serpentor saving Falcon. Roadblock and Cobra Commander are found by Flint, Lifeline, and Iceberg, and they relay the location of Cobra-La and the BET after General Hawk mobilized every Joe, except the Rawhides, in an assault on Cobra-La, but they are ambushed and captured by the traps from before as they enter the cavernous ice dome. The Rawhides meet up with Roadblock and Flint and manage to sneak into Cobra-La with one of them, Tunnel-Rat, discovers a river tunnel.

After freeing the captured Joes, Falcon, along with Jinx, and Sgt. Slaughter manages to defeat Serpentor, Pythona, and Nemesis Enforcer, before Falcon engages Golobulus. After winning, The cadet manages to destroy both the BET and the spore pods in space. Cobra-La's ice dome is ravaged and the Joes leave victorious.

The film features an appearance by nearly every character to date (Clutch, Grunt, and Steeler appear, but only because their last episode happened just after the film's release). Below is a complete list of previously existing characters that appear in the film.

Intended to bridge the gap between the end of the second season of G.I. Joe's animated series and the never-produced third season, G.I. Joe: The Movie introduced a number of new characters. Included were:

There were also the Renegades, a trio of reformed bad apples under the supervision of Sgt. Slaughter, consisting of:

-- Cobra Commander mutating into a serpent

"As my blind ninja master used to say, 'The keenest eye is that which looks inward.'"

"The crowd ain't the only ones going bananas!"

"I hope you both get fleas."

"Man, who ever heard of being shot down by salad?"

-- Law, when Beach Head objects to him using a dog to find a bomb

Frank Welker is not specifically credited as Order, but he does provide the vocals of the dog in the Rawhides training sequence, as he has provided animal vocal work for dozens of creatures - several in GI Joe itself - throughout his voice work career. Gregg Berger, a vocal actor for GI Joe for several years (as Spirit and Firefly, most notably) only has featured vocals in the movie as a Motor-Viper (random yells and hollars during the first battle for the B.E.T.).

Jack Angel is credited as Wet-Suit, and even though the character does not have any dialogue, during the final battle, when he gets punched by a Royal Guard, you can hear him scream (although it's barely audible thanks to the background fight grunts provided by the other voice actors). Michael Bell is credited as Blowtorch, but his scene was deleted. Peter Cullen and Vernee Watson-Johnson are credited as scientists but their scenes got deleted. Dan Gilvezan is credited as Slip-Stream, but he only manages to get some background walla sounds as dialogue in the final cut. Chuck McCann is credited as Leatherneck, but, as with Wet-Suit, during the final battle, after Wet-Suit gets punched by the Royal Guard, Leatherneck punches the Royal Guard, and you can hear a fight grunt when he punches the guard (although there's the background fight grunts during this whole sequence, Leatherneck's grunt is more audible than Wet-Suit's). Neil Ross is credited as Hector Ramirez, and even had a scene storyboarded, but it got deleted. The movie script coming with the Shout Factory DVD, features a scene featuring Blowtorch and another scene featuring the scientists analyzing the spore launch just before the scene where Ramirez is reporting from the UN building.

Retrieved from "https://gijoe.fandom.com/wiki/G.I._Joe:_The_Movie?oldid=52327"
Community content is available under CC-BY-SA unless otherwise noted.