You have reached the cached page for https://www.introducingmadrid.com/teleferico
Below is a snapshot of the Web page as it appeared on 3/6/2021 (the last time our crawler visited it). This is the version of the page that was used for ranking your search results. The page may have changed since we last cached it. To see what might have changed (without the highlights), go to the current page.
You searched for: +teleferico madrid We have highlighted matching words that appear in the page below.
Bing is not responsible for the content of this page.
Teleférico de Madrid - Madrid's Cable Car

The inauguration of Madrid’s only cable car, the Teleférico de Madrid, was postponed various months due to the complaints of the neighbours who were concerned that visitors would see inside their windows while travelling on the cable car. Finally, it was opened to the public in 1969. Since then, it has become one of the best-liked attractions in Madrid.

Riding on the Teleférico

The Teleférico has eighty cabins, each with a maximum capacity of six people. The cable car runs between Parque Oeste, in central Madrid, and Casa de Campo, the capital’s largest park. The whole distance is 2.5 kilometres, taking eleven minutes to get from one station to the other.

During the journey, passengers will rise 40 meters above ground level to admire some of the city’s most important landmarks like Almudena Cathedral and the Royal Palace of Madrid.

The Teleférico de Madrid is not considered one of Madrid’s top attractions, but every year it offers its service to over 300,000 passengers. The capital’s cable car is a great option for children and families. 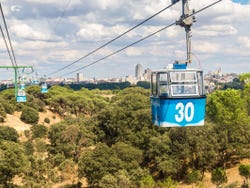 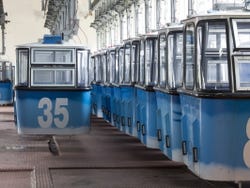 The schedule varies depending on the season. We suggest you check the opening hours on the official Teleférico de Madrid website. 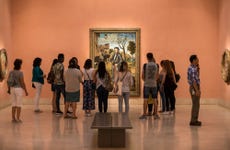 Take your guide everywhere with you