You have reached the cached page for https://www.yidio.com/movie/table-19/65687
Below is a snapshot of the Web page as it appeared on 1/5/2021 (the last time our crawler visited it). This is the version of the page that was used for ranking your search results. The page may have changed since we last cached it. To see what might have changed (without the highlights), go to the current page.
You searched for: +table 19 watch online for free We have highlighted matching words that appear in the page below.
Bing is not responsible for the content of this page.
Watch Table 19 Online | 2017 Movie | Yidio

"You're invited to the wedding of the season"
Add to Watchlist

Eloise finds herself the ex-maid of honor at one of her oldest friend's wedding. She was relieved of her duties after being dumped by the best man of the wedding party, via text. Instead of hiding away and licking her wounds, she decides to stand her ground and hold her head up high and attend the wedding anyway. However, she finds that she has been seated at the 'special' table that is in the very back of the ballroom. She meets a random group of strangers seated at the table with her. Most of these people probably should have known to just send their regards. However, they did send gifts instead. As the characters at table 19 being to get to know each other and secrets are unearthed, and revealed, Eloise learns about friendships, and even a little romance, can happen under the most unlikely and odd circumstances.

Table 19 is an Comedy, Drama movie that was released in 2017 and has a run time of 1 hr 27 min. It has received mostly poor reviews from critics and viewers, who have given it an IMDb score of 5.8 and a MetaScore of 40.

Where do I stream Table 19 online? Table 19 is available to watch and stream, buy on demand at Amazon, Vudu, Google Play, iTunes, YouTube VOD online. Some platforms allow you to rent Table 19 for a limited time or purchase the movie and download it to your device. 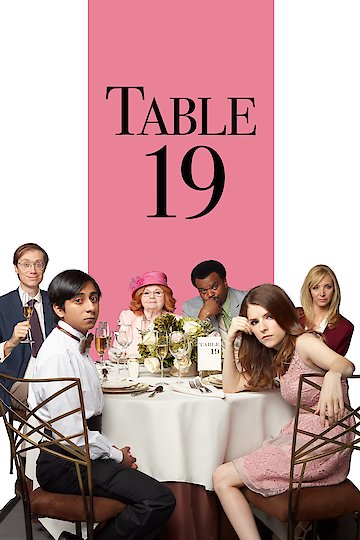