You have reached the cached page for https://www.brianorndorf.com/2008/11/film-review-synecdoche-new-york.html
Below is a snapshot of the Web page as it appeared on 2/26/2021 (the last time our crawler visited it). This is the version of the page that was used for ranking your search results. The page may have changed since we last cached it. To see what might have changed (without the highlights), go to the current page.
You searched for: +synecdoche new york movie trailer review We have highlighted matching words that appear in the page below.
Bing is not responsible for the content of this page.
BRIANORNDORF.COM: Film Review: Synecdoche, New York
Home Archives Profile Subscribe
Cinematic Titanic: Santa Claus Conquers the Martians (Trailer)
Film Review: House

Caden Cotard (Philip Seymour Hoffman) is a troubled man, confronted with the end of his marriage (the wife is played by Catherine Keener) and estrangement from his young daughter, while facing a creative roadblock reworking famous plays. The stress manifests itself through Caden’s failing health; the artist finds himself consumed with his body, tuning out the rest of the world. When a sizable financial grant falls into Caden’s lap, he takes up the challenge to create a massive theatrical production, assuming control of a cavernous warehouse to erect a replica of New York City, spending decades trying to perfect this mirror image of his life while hoping to elude the harsh reality of love and death.

“Synecdoche” is a purposefully indulgent piece of work that will likely induce nirvana in some viewers while boring the bejesus out of others. To the film’s credit, it’s a singular vision of self, monitoring Kaufman as he takes a stroll through his own dysfunction and fears, using the costume of fiction to put forth a morbid motion picture seemingly created only to tickle the filmmaker. It’s not a bad thing for Kaufman to photograph his neuroses, after all, he’s been banging the same drum for a decade now, using strained passes at alt-film whimsy (“Eternal Sunshine of the Spotless Mind,” “Being John Malkovich,” “Human Nature”) to speak about the extravagance of unsettled emotions. Why should “Synecdoche” be any different? Now that he has pried directorial control away from quirky Frenchmen and skate video gurus, it’s time for Kaufman to assume center stage, and if you’re searching for an impossible portion of psychological sludge, “Synecdoche” is a required art-house appointment.

I was less inclined to embrace the torment, finding Caden’s trail to be an endlessly circular journey fattened beyond recognition with idiosyncrasy neither enchanting nor profound. It just never sealed up as a quaking experience to me; the picture is lost in a fog of self-awareness and painfully underlined fancy that provided more excuses to stare blankly at the screen instead of mourning along with Caden as he scrutinizes his own demise, loneliness, and all sorts of adventures of introspection it takes a literal lifetime for him to confront.

While Kaufman is off playing around with bodily functions (fecal matter is practically a supporting player here), inflating breast sizes, and generally tinkering with the passage of time, “Synecdoche” wanders too far away from a claustrophobic portrait of existential angst. The wider the story gets, as Caden bends reality with his city-reconstruction play and loses his perspective while drowning in 360 degree performance, the less impactful the themes become, the final swipe of the film reduced to a mere post-it note on a banner of blaring neurosis. The cast is quite game to follow the director anywhere, with Kaufman assembling a 1927 Yankees line-up of art-house all stars (Keener, Hoffman, Jennifer Jason Leigh, Michelle Williams, Tom Noonan, Hope Davis, Emily Watson, Diane Wiest, and Samantha Morton as Hazel, Caden’s lifelong object of desire) to portray the eccentricities. Their efforts are appealing, just lost in the overall spectrum of quirk.

Calling “Synecdoche, New York” pretentious is futile, as Kaufman would most likely agree with that label. I lean more toward laborious. It’s a film working its way towards interpretational paradise, but the lengthy surreal asides are an endurance trial that present little in the way of appreciation. Kaufman has every right to keep making the same movie over and over, but to see him run through the routine of somber enlightenment (abyssal illumination?) is a chore. With this drifting, humdrum, stalled engine of a motion picture out of his system, Kaufman can finally alter his game and move towards more consequential routes of personal exploration. 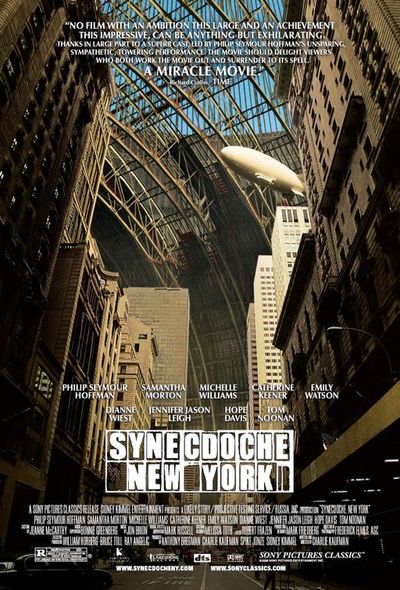 This is only a preview. Your comment has not yet been posted.

The letters and numbers you entered did not match the image. Please try again.

As a final step before posting your comment, enter the letters and numbers you see in the image below. This prevents automated programs from posting comments.

Having trouble reading this image? View an alternate.

Comments are moderated, and will not appear until the author has approved them.

(Name is required. Email address will not be displayed with the comment.)