You have reached the cached page for https://aesaintsoftheday.blogspot.com/2010/03/st-matilda-of-ringelheim.html
Below is a snapshot of the Web page as it appeared on 10/24/2020 (the last time our crawler visited it). This is the version of the page that was used for ranking your search results. The page may have changed since we last cached it. To see what might have changed (without the highlights), go to the current page.
You searched for: +st. matilda of ringelheim We have highlighted matching words that appear in the page below.
Bing is not responsible for the content of this page.
St. Matilda of Ringelheim Skip to main content 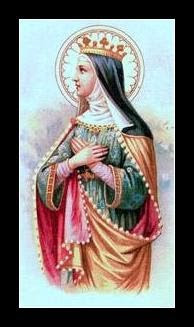 Prayer
Father may Queen Matilda help
us love you and the Blessed
Virgin Mary. So we all can be
Saints like her.
AMEN

Thomas grew up and was educated in Villanueva de los Infantes, in the province of Ciudad Real, Spain, where his parents owned a prosperous estate; therefore the name Thomas of Villanueva. Part of the original house still stands, with a coat of arms in the corner, beside a family chapel. In spite of his family's wealth, as a young boy he often went about naked because he had given his clothing to the poor.

Even though he studied Arts and Theology at the University of Alcalá de Henares and became a professor there, he decided to enter the Augustinian order in Salamanca in 1516, and in 1518 was ordained a priest. Within the order, he held the positions of prior of the friary, General Visitor, and Provincial Prior for Andalusia and Castile. He was also a professor at the university and couns…
Read more

St. Michael
When GOD created the angels, these beautiful spirits of light and love lived in the Kingdom of Heaven, when GOD created them he gave them holiness, beauty, and wisdom. GOD wanted to test the angels to see if they loved him before they saw him face to face in Heaven. Outof many angels, one of the most powerful angels was Lucifer, whose name meant "Receiver of Light." Glad with his power, he shouted a yell of disobedience yelling "I shall not serve GOD!" But another Archangel, Michael, shouted a yell of love and obedience yelling "Who is like GOD?!" In a great battle, the Good Angels threw the Evil Angels out of Heaven and into Hell. As a reward for his love and obedience GOD made Michael Prince of the Celestial Courts. Since the beginning of time, St. Michael was the chief of the temple chosen by GOD. In the new testament Michael is the Guardian Angel and protector of the Holy Catholic Church. The name Michael means "Who is like GOD?"

Born in Sahuayo, Michoacan, 28 March 1913, son of Macario and Maria Sanchez del Rio, Jose Luis was murdered on 10 February 1928, during Mexico's religious persecution known as The Cristero War.The Cristeros were a large group Mexican Catholics leveled against the oppression of the regime of Plutarco Elías Calles.
A year before his martyrdom, José Luis had joined the forces' Cristero »General Prudencio Mendoza, nestled in the town of Cotija, Michoacan.
The martyrdom was witnessed by two children, one of seven years and the other nine, who later became founders of religious congregations. One of them is the Rev. Marcial Maciel, founder of the Legionaries of Christ, born in Cotija, who in the interview book "My Life is Christ" reveals the crucial role that his vocation would be to the testimony of Jose Luis, who was a friend .
"He was captured by government forces, who wanted to give the civilian population that supported the Cristeros exemplary punishment," reca…
Read more

AE
In this blog we will provide information on various Saints and their lives. Starting in the Winter of 2018 we will be posting more saints. Unfortunately, our Spanish blog, Una Familia en Dios, got deleted. However, we will continue to post in Spanish here as well and we will cover more than just saints in two languages. Thank You very much for your patience and God Bless you.