You have reached the cached page for https://www.rottentomatoes.com/m/ma_2019
Below is a snapshot of the Web page as it appeared on 12/3/2020 (the last time our crawler visited it). This is the version of the page that was used for ranking your search results. The page may have changed since we last cached it. To see what might have changed (without the highlights), go to the current page.
You searched for: +space camp movie trailer We have highlighted matching words that appear in the page below.
Bing is not responsible for the content of this page.
Ma (2019) - Rotten Tomatoes
Home
Top Box Office
Tickets & Showtimes
DVD & Streaming
TV
News 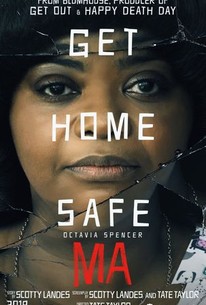 Octavia Spencer's performance overpowers many of Ma's flaws, but uneven pacing and a labored story keep this thriller from fully realizing its unhinged potential.

A lonely middle-aged woman befriends some teenagers and decides to let them party in the basement of her home. But there are some house rules: One of the kids has to stay sober, don't curse, and never go upstairs. They must also refer to her as Ma. But as Ma's hospitality starts to curdle into obsession, what began as a teenage dream turns into a terrorizing nightmare, and Ma's place goes from the best place in town to the worst place on Earth.