You have reached the cached page for https://www.dailymail.co.uk/tvshowbiz/article-2616018/Cuba-Gooding-Jr-hit-cheating-claims.html
Below is a snapshot of the Web page as it appeared on 4/10/2021 (the last time our crawler visited it). This is the version of the page that was used for ranking your search results. The page may have changed since we last cached it. To see what might have changed (without the highlights), go to the current page.
You searched for: +show me cuba gooding jr. movies g jr movies he played in We have highlighted matching words that appear in the page below.
Bing is not responsible for the content of this page.
Cuba Gooding Jr hit by cheating claims | Daily Mail Online

Cuba Gooding Jr hit by claim he came on to a woman after drunken night in club seven years ago... as wife of 20 years files for separation

Cuba Gooding Jr has been hit by claims that he tried to sleep with a woman after the two got drunk inside a nightclub in 2007.

This accusation comes just one week after his wife of 20 years, Sara Kapfer - who he has three children with - filed for legal separation citing irreconcilable differences.

The cheating claim was posted on RadarOnline on Tuesday and the woman chose to not be identified.

The 46-year-old star's rep did not return calls to MailOnline. 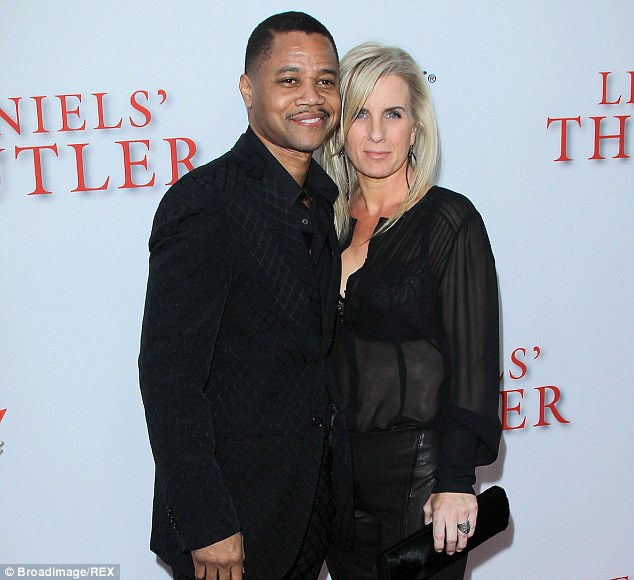 Did he stray?: Cuba Gooding Jr, pictured with his wife Sara Kapfer in 2013; has been accused of hitting on another woman

The Jerry Maguire actor allegedly met the female inside a nightclub after the premiere of one of his 2007 movies. According to the site, her presence at the club was verified by 'multiple witnesses.' The club was not named.

Gooding attended at least two premieres for his films in 2007: What Love Is on March 20 in LA and American Gangster at the Apollo Theater in New York City on October 19.

The accuser wrote her story in first person. Her tale began by noting how 'aggressive' the actor was from the moment she 'locked eyes' with the born-again Christian. 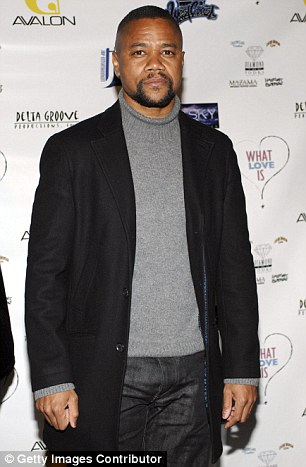 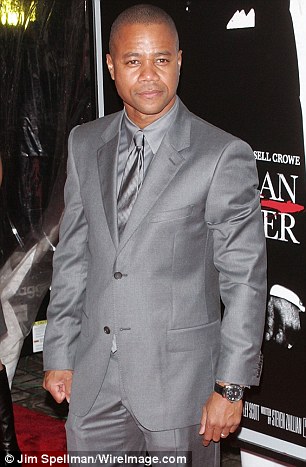 The incident occurred in 2007 after one of his movie premieres: The 46-year-old on the red carpet for two of his 2007 films, What Love Is (left, on March 20) and American Gangster (right on October 19)

Gooding was 'pointing' at her in the crowd and motioning for her 'to come sit beside him,' she wrote.

'I had no interest in him romantically, but he had table service and seemed to be fun so I went and sat with him,' she noted.

She could tell that the star was 'pretty drunk' and was put off that he stuck his hands in her pants as soon as she sat down.

'It was honestly so gross, so I just kept moving around trying to keep his hands off me,' the lady explained. 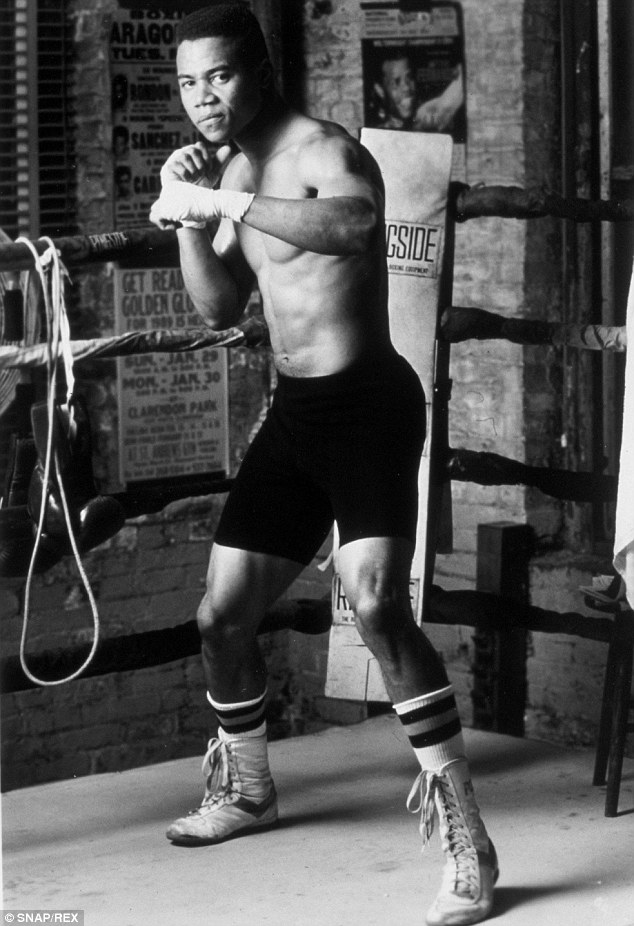 He showed off his body: The woman claimed once in his penthouse suite, the actor stripped down to his boxers to reveal a toned physique, which he also did here in the 1992 film Gladiator

Cuba and the woman spent several hours at the club where they went through three bottles of vodka, she alleged.

When she and her friends were asked to go back to Gooding's penthouse suite to party some more, the woman said she thought it could be fun so she agreed to go.

'When we got up to Cuba’s suite he immediately stripped down to his boxers. It was the weirdest thing, but he was clearly trying to show of,' she alleged.

'There were probably about eight of us in the suite and Cuba made no secret of getting high on cocaine.'

The lady claimed that as soon as she got to the suite Gooding 'made me his prey.' 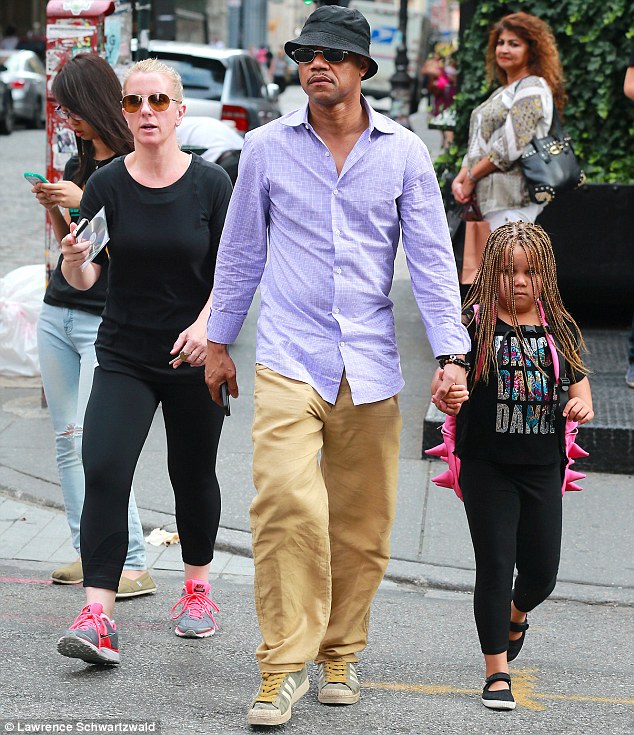 She claimed, 'He couldn’t keep his hands off me and would literally kiss me, shoving his tongue down my throat, at every chance he got to get close enough to me. It was really aggressive and intimidating, but I just kept playfully pushing him away.'

The unidentified person then said that he 'threw' her on a bed then got on top of her. She asserted that he tried to sleep with her and promised she would have the 'night of her life.' She claims to have turned him down.

It was pointed out that the Boyz In The Hood star 'bragged' he got lots of women because he was famous.

'If it weren’t for other people being in the suite with us, I think things could have definitely got out of hand,' she alleged.

The lady and her pals left the suite at 8 am. 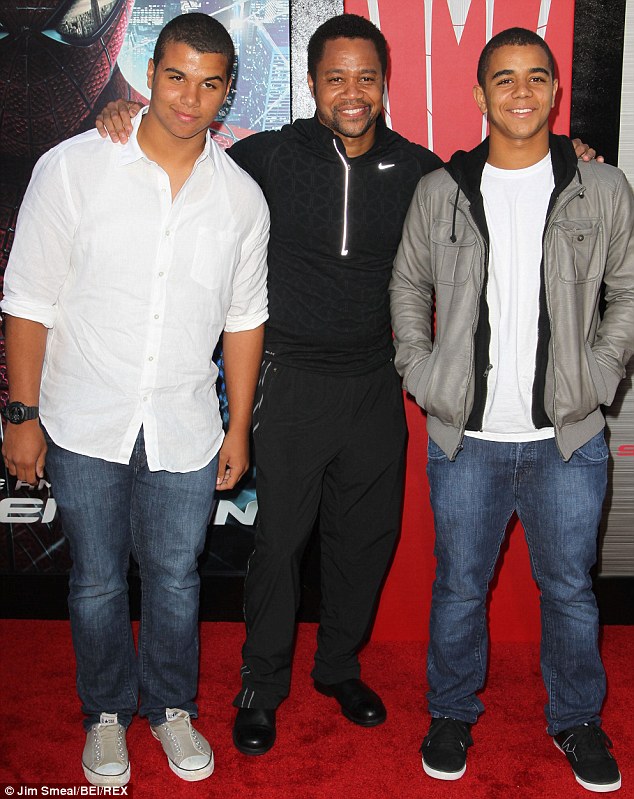 Two sons: Cuba and his sons Spencer and Mason are shown together in June 2012 at The Amazing Spider-Man premiere in Los Angeles

She argued she wanted to share her story with the site because she had just heard about the split from his wife and thought it was 'about time' everyone knew about what he did.

The timing couldn't be any worse for the former co-star and good friend of Tom Cruise.

According to TMZ.com, Gooding's wife Sara wants joint legal and physical custody of their children, Spencer, Mason and Piper, and child support will be determined at a later date.

The couple tied the knot in 1994 after meeting in high school.

Just last year, the The Butler star gushed about being married to Sara on The View, but he admitted he was struggling to find time to be with his family while performing in The Trip to Bountiful on Broadway. 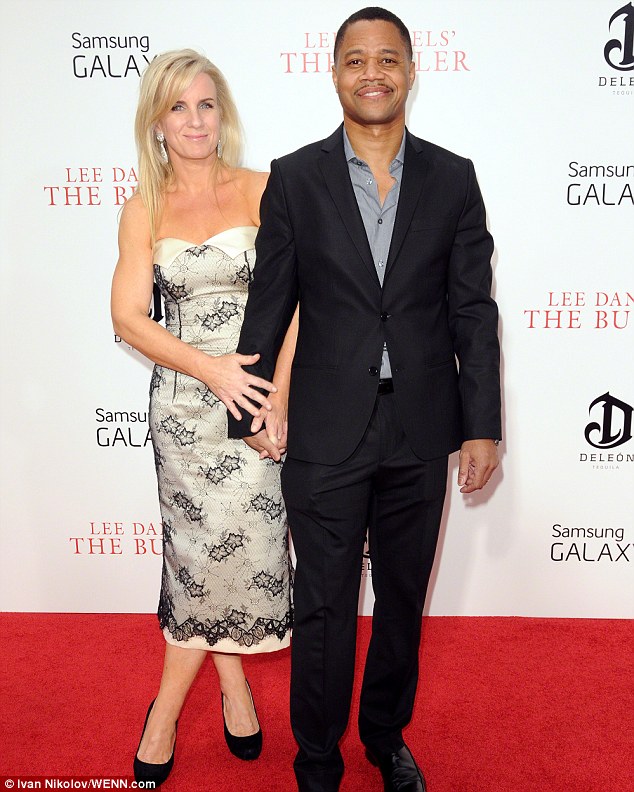 He said: 'When you do films, you're away from the family, but I can still fly them in or fly home to see them, so... my wife and I... have this rule - never go more than three or four weeks without seeing each other.

'But I knew this commitment meant that I would be in New York City for a long time; I'm here possibly through September, so it's a bit of a pull on that to keep the household together. But she allowed me to be indulgent for obvious reasons... This is a once in a lifetime opportunity.'

The actor added: 'I got a wonderful lady that knows how to run the household even when I'm not there. (And) we're just blessed with wonderful kids.' 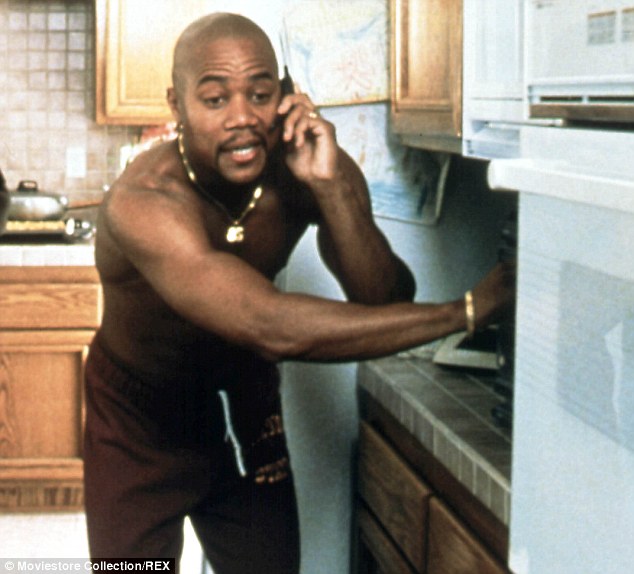 Oscar winner: Cubs is shown in the 1996 movie Jerry Maguire in which he won an Oscar for Best Supporting Actor

'The high-school girl, then the college girl, the newlywed and the mother... she has been changing to this other woman that I have to introduce myself to every few years,' he said of Sara on The View.

'And thank god I've fallen in love with every one,' he said.

But, Cuba explained: 'Now she's dealing with the kids leaving the house.'

And he joked: 'I wanna kill her sometimes.'