You have reached the cached page for https://www.celebdirtylaundry.com/2016/days-of-our-lives-spoilers-shawn-christian-and-arianne-zuckers-loving-romance-will-nicole-follow-daniels-dool-exit/
Below is a snapshot of the Web page as it appeared on 9/1/2021 (the last time our crawler visited it). This is the version of the page that was used for ranking your search results. The page may have changed since we last cached it. To see what might have changed (without the highlights), go to the current page.
You searched for: +shawn christian and arianne zucker dating We have highlighted matching words that appear in the page below.
Bing is not responsible for the content of this page.
Days of Our Lives Spoilers: Shawn Christian and Arianne Zucker's Loving Romance - Will Nicole Follow Daniel's DOOL Exit? | Celeb Dirty Laundry Skip to content 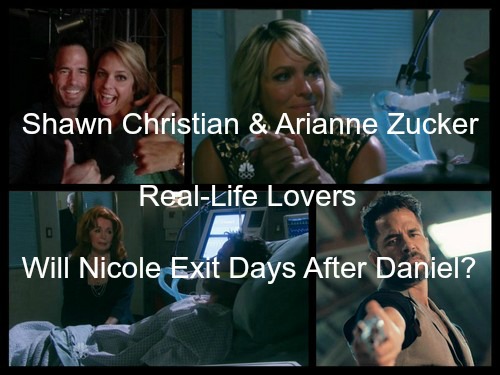 “Days of Our Lives” spoilers reveal that Melanie (Molly Burnett) will return to town for Daniel’s (Shawn Christian) funeral. As Salem gathers to bid Daniel farewell, DOOL viewers will also have to say goodbye. Although Daniel will soon be gone for good, you’ll still have a chance to see Shawn Christian in some new films.

Christian has spent the last few months on the set of several new movies, including “Hidden Truth” and “Last Seen in Idaho.” Based on Christian’s tweets, it looks like he’s been having a blast working on a comedy called “Savannah Sunrise.” It’s clear that Christian has been staying busy since he wrapped up his final scenes at “Days of Our Lives.”

Arianne Zucker, who plays Nicole, has been delivering powerful performances as her character grieves for her love. It’s worth mentioning that Zucker and Christian are reportedly dating in real life. Now that Christian is no longer with the show, “Days” fans are nervous that Zucker might go on her merry way as well.

After all, Christian and Zucker have both experienced a drastic drop in airtime recently.

Zucker’s contract is estimated to expire in March, which means her future with the NBC soap certainly isn’t set in stone. However, we should point out that Zucker left “Days of Our Lives” in 2006 and ended up returning in 2008.

In various interviews, Zucker has hinted that she wanted to take some time to explore other opportunities during that timeframe.

Since Zucker came back, perhaps she decided DOOL is where she’s meant to be. Nevertheless, people can change their minds. Zucker could always choose to bow out once again.

Word has it that “Days” could also be making budget cuts in an attempt to save money and secure a renewal. More characters could be written out in the coming months. Most viewers are hoping that Nicole and her portrayer will escape the potential cast slashing.

Stick with CDL for updates on Nicole’s fate.

So “Days” fans, what do you think about the news that Shawn Christian has several new films in the works? Could Christian’s success persuade Arianne Zucker to move on or does she already have her exploratory phase out of her system?

Will the show decide to keep Nicole in the rotation? Voice your opinion in the comments below and don’t forget to check CDL often for the latest “Days of Our Lives” spoilers, updates and news.