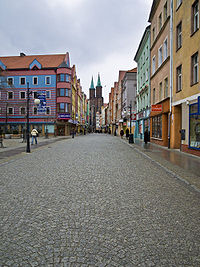 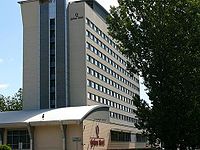 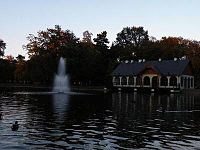 Goat Pond with the restaurant "Venice" 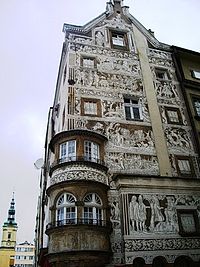 House "Under the Quail Basket"

listen) (former Lignica, German: Liegnitz, Czech: Lehnice, Latin: Lignitium) is a town in south-western Poland, in Silesia, in the central part of Lower Silesia, on the plain of Legnica, riverside: Kaczawa (left tributy of the Oder) and Czarna Woda. Between 1 June 1975 and 31 December 1998 Legnica was the capital of the Legnica Voivodeship. It is currently the seat of the county. Since 1992 the city is the seat of the Diocese of Legnica.

As of 31 December 2009 (2009 -12-31)[update] Legnica has 104,178 inhabitants and is the third largest city in the voivodeship (after Wrocław and Wałbrzych) and 38th in Poland. It also constitutes the southernmost and the largest urban center of Legnicko-Głogowski Okręg Miedziowy with agglomeration of 448.617 inhabitants. Legnica is the largest city of the Legnicko-Głogowski Okręg Miedziowy conurbation. Legnica is a member of the Association of Polish Cities.

The area of Legnica was at the intersection of travel routes of Celtic and East Germanic tribes. Tacitus in his Germania and Ptolemy recorded the Lugii (Lygii) in Magna Germania, and mentioned their town of Lugidunum, which has been attributed to both Legnica[1] and Głogów.[2] When the East Germanic tribes left for southern Europe, West Slavic tribes moved in and were the first group to settle it permanently.

The city was first officially mentioned in chronicles from 1004, although settlement dates to the 7th century. It was originally known as Lignica. It became the residence of the dukes of Lower Silesia in 1163 and was the seat of a principality ruled from 1248-1675.

Legnica became famous for the Battle of Legnica (or Battle of Wahlstatt) that took place at Legnickie Pole near the city on 9 April 1241 during the Mongol invasion of Europe. The Christian army of the Polish duke Henry II the Pious of Silesia, supported by the feudal nobility, included Poles, Bavarian miners and military orders, was decisively defeated by the Mongols. Although the Mongols killed Henry and destroyed his forces, their advance into Europe was halted when they turned back to attend to the election of a new Khagan (Grand Khan) following the death in the same year of Ögedei Khan. Minor celebrations are held annually in Legnica to commemorate the battle.

As the capital of the Duchy of Legnica at the beginning of the 14th century, Legnica was one of the most important cities of Central Europe, having a population of approximately 16,000 residents.[citation needed] The city began to expand quickly after the discovery of gold in the Kaczawa River between Legnica and Złotoryja (Goldberg).

Legnica, along with other Silesian duchies, became a vassal of the Kingdom of Bohemia during the 14th century and was included within the Holy Roman Empire. The Protestant Reformation was introduced in the duchy as early as 1522 and the population became Lutheran. After the death of King Louis II of Hungary and Bohemia at Mohács in 1526, Legnica was inherited by the Habsburg Monarchy of Austria. The first map of Silesia was made by native son Martin Helwig. In 1676, Legnica passed to direct Habsburg rule after the death of the last Silesian Piast duke, Georg Wilhelm (son of Duke Christian of Brieg), despite the earlier inheritance pact by Brandenburg and Silesia, by which it was to go to Brandenburg. Silesian aristocracy was trained at the Liegnitz Ritter-Akademie.

War of the Austrian Succession

In 1742 most of Silesia, including Liegnitz, became part of the Kingdom of Prussia after King Frederick the Great's defeat of Austria in the War of the Austrian Succession. In 1760 during the Seven Years' War, Liegnitz was the site of the Battle of Liegnitz when Frederick's army defeated an Austrian army led by Laudon.

In 1813 during the Napoleonic Wars, the Prussians, under Field Marshal Blücher, defeated the French forces of MacDonald in the Battle of Katzbach nearby. After the administrative reorganization of the Prussian state following the Congress of Vienna, Liegnitz and the surrounding territory (Landkreis Liegnitz) were incorporated into the Regierungsbezirk (administrative district) Liegnitz, within the Province of Silesia on 1 May 1816. Along with the rest of Prussia, the town became part of the German Empire in 1871 during the unification of Germany. On 1 January 1874 Liegnitz became the third city in Lower Silesia (after Breslau and Görlitz) to be raised to an urban district, although the district administrator of the surrounding Landkreis Liegnitz continued to have his seat in the city.

The census of 1910 gave Liegnitz's population as 95.86 % German, 0.15 % German and Polish, 1.27 % Polish, 2.26 % Wendish, and 0.19 % Czechs. On 1 April 1937 parts of the Landkreis Liegnitz communities of Alt Beckern, Groß Beckern, Hummel, Liegnitzer Vorwerke, Pfaffendorf und Prinkendorf were incorporated into the city of Liegnitz. After the Treaty of Versailles following World War I, Liegnitz was part of the newly created Province of Lower Silesia from 1919 to 1938, then of the Province of Silesia from 1938 to 1941, and again of the Province of Lower Silesia from 1941 to 1945.

After the defeat of Nazi Germany during World War II, Liegnitz and all of Silesia east of the Neisse river was transferred to Poland following the Potsdam Conference in 1945. The German population was expelled from between 1945 and 1947 and replaced with Poles and, as the medieval Polish name Lignica was considered archaic, the town was renamed Legnica. The transfer to Poland decided at Potsdam in 1945 was officially recognized by East Germany in 1950, by West Germany under Chancellor Willy Brandt in the Treaty of Warsaw signed in 1970, and finally by the reunited Germany by the Two Plus Four Agreement in 1990. By 1990 only a handful of Polonized Germans, prewar citizens of Liegnitz, remained of the pre-1945 German population. In 2010 the city celebrated the 65th anniversary of the "return of Legnica to Poland" and its liberation from the Nazis.[3]

The city was only partly damaged in World War II. After 1965 most parts of the preserved old town with its precious town houses were demolished, the historical layout was abolished, and the city was rebuilt in modern forms.[4]

From 1945 to 1990, during the Cold War, the headquarters of the Soviet forces in Poland, the so-called Northern Group of Forces, was located in the city. This fact had a strong influence on the life of the city. For much of the period, the city was divided into Polish and Soviet areas, with the latter closed to the public. These were first established in July 1945, when the Soviets forcibly ejected newly arrived Polish inhabitants from the parts of the city they wanted for their own use. The ejection was perceived by some as a particularly brutal action, and rumours circulated exaggerating its severity, though no evidence of anyone being killed in the course of it has come to light. In April 1946 city officials estimated that they were 16,700 Poles, 12,800 Germans, and 60,000 Soviets in Legnica.[5] The last Soviet units left the city in 1993.

In the 1950s and 1960s the local copper and nickel industries became a major factor in the economic development of the area. Legnica houses industrial plants belonging to KGHM Polska Miedź, one of the largest producers of copper and silver in the world. The company owns a large copper mill on the western outskirts of town. There is a Special Economic Zone in Legnica, where Lenovo was going to open a factory in summer 2008.[6][7]

As of 2007, Legnica is twinned with five other European towns.

Legnica is noted for its parks and gardens, and has seven hundred hectares of green space, mostly along the banks of the Kaczawa river; the Tarninow district is particularly attractive.[8]

To the south of Legnica is the A4 motorway. Legnica has also a district, which is a part of national road no 3. The express road S3 building has been planned nearby.

Legnica has public transport. In city there are 20 normal bus lines, 1 belt-line, 2 night lines and 3 suburban.

The town has an airport (airport code EPLE) with a 1600-metre runway, the remains of a former Soviet air base, but it is (as of 2007[update]) in a poor state and not used for commercial flights.

Until the winter of 2003, the longest osobowy (standard railway train stopping at every station, in contrast to fast and express trains) train service in Poland ran from Katowice to Legnica (via Kędzierzyn-Koźle, Nysa, and Jaworzyna Śląska).

Legnica tends to be a left-of-center town with a considerable influence of workers' unions. The Municipal Council of Legnica (Rada miejska miasta Legnica) is the legislative branch of the local government and is composed of 25 members elected in local elections every five years. The mayor or town president (Prezydent miasta) is the executive branch of the local government and is directly elected in the same municipal elections.

All translations of LEGNICA