You have reached the cached page for https://usawatchdog.com/drought-famine-vax-depopulation-steve-quayle/
Below is a snapshot of the Web page as it appeared on 1/19/2022 (the last time our crawler visited it). This is the version of the page that was used for ranking your search results. The page may have changed since we last cached it. To see what might have changed (without the highlights), go to the current page.
You searched for: +robert redfield cdc director mask wearing mask books We have highlighted matching words that appear in the page below.
Bing is not responsible for the content of this page.
Drought, Famine & Vax = Depopulation – Steve Quayle | Greg Hunter’s USAWatchdog
Home
»
Political Analysis
»
Drought, Famine & Vax = Depopulation – Steve Quayle 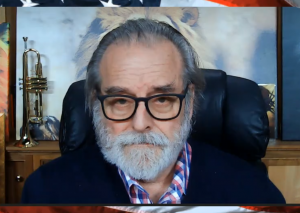 Renowned radio host, filmmaker and book author Steve Quayle says America is under attack from many sides.  One is in our face, and many do not realize how dire the situation is in the western U.S.  Quayle says the so-called 1,200 year Megadrought is being manufactured with geoengineering.  The globalists are cutting off the water, and that means cutting food supplies.   Quayle explains, “We have got record low water levels that are being broken.  We have absolute power issues coming up. . . . I am trying to tell people this:  the days of taking water for granted are over.”

Quayle has a new film coming out at the end of September called “Megadrought: Vanishing Water.”  The water shortage and extreme drought is all fitting into the Great Reset.  Quayle explains, “He who controls the head waters controls life.  This is why you are going to begin to see water wars.  In this film, we are dealing with global shortages of water and not just the U.S.  The U.S. is the most pronounced drought. . . . This issue is seen globally and I believe part of the Great Reset . . . It’s about trying to get people controlled down to 1,500 calories a day.  Isn’t it interesting, the UN eats filet mignon, and they are telling you and me to get used to eating insect protein.  The idea is controlling the food, and if you control food, you control life. . . . I am being told that when the water crisis gets acute enough on the West Coast, California, Washington, and Nevada will have border lockdowns.  What is a border lockdown?  Any state that has water does not want to be rushed with 20 or 40 million people, and that’s what they are talking about.”

Quayle says the Megadrought will all end up as a food shortage or worse.  Quayle says, “Drought them out or starve them out.  Drought equals famine.”  Quayle predicts, “We are going to have the biggest mass migration out of the western U.S. that we have ever seen.”

When will the public wake up to how bad the Megadrought situation really is?  Quayle says, “My sources are telling me the drought problems are going to get so acute by November of 2021, there will be no denial. . . .This is warfare against the American people. . . . drought, famine, ‘vax-sassination’ all add up to depopulation. . . . John Deagel predicted there would be only 100 million people in the USA by 2025. . . . We are undergoing an attempted communist takeover and take down.  When Stalin came to power, he starved the Ukrainians . . . and five million people died.  So, starvation is a weapon of the globalists and elitists of the New World Order.”

Join Greg Hunter as he talks to radio host, filmmaker and top selling author Steve Quayle as he talks about his upcoming film “Megadrought: Vanishing Water.”  9/1/21  (There is much more in the 58 minute interview.)

There is free information on SteveQuayle.com.

Keep checking for the release of this dynamic new film at GenSix.com or SteveQuayle.com.

Greg is the producer and creator of USAWatchdog.com. The site’s slogan is “analyzing the news to give you a clear picture of what’s really going on.” The site will keep an eye on the government, your financial interests and cut through the media spin. USAWatchdog.com is neither Democrat nor Republican, Liberal or Conservative. Before creating and producing the site, Greg spent nearly 9 years as a network and investigative correspondent. He worked for ABC News and Good Morning America for nearly 6 years. Most recently, Greg worked for CNN for shows such as Paula Zahn Now, American Morning and various CNN business shows.

Please Note: All comments are moderated and manually reviewed for spam. In turn, your comment may take up to 24 hours to be posted. USAWatchdog.com also reserves the right to edit comments for grammar and spelling errors.