Regis High School is a private Jesuit university-preparatory school for academically gifted Roman Catholic young men located on Manhattan's Upper East Side.[4] Annual class enrollment is limited to approximately 135 male students from the New York, New Jersey, and Connecticut tri-state area. The school's motto, "Deo et Patriae" (For God and Country), speaks to its intention to produce men committed to devoting the advantages of his education to the service of society and the underprivileged. All students at Regis receive a tuition-free education. Regis is widely considered a "feeder school" to the top colleges and universities in the nation and abroad.[5]

Regis High School was founded in 1914 through the financial bequest of a single formerly anonymous benefactress: Julia M. Grant, the widow of Mayor Hugh J. Grant. She stipulated that her gift be used to build a Jesuit high school providing a free education for Catholic boys with special consideration given to those who could not otherwise afford a Catholic education.[6] The Grants' former home currently houses the Vatican Observer to the United Nations, which is where the Pope stays when he visits New York City.[citation needed]

The school building was built to the designs of the Boston firm of Maginnis & Walsh.[7]

The identity of the school's founding benefactor was officially kept secret for decades, though the large portrait in the school's first floor conference room titled "Julia Grant" contradicted the official policy. The online announcement of an auction that included items related to the school's founding did so as well.[8] Finally, on October 26, 2009, a documentary film revealed her identity and detailed the circumstances of her gift. Following her husband's death in 1910, Julia Grant met with Father Hearn, S.J. and, with a stipulation of strict anonymity, gave him an envelope with the money needed to start a school to educate bright Catholic boys. When Mrs. Grant died, her children took over the funding of the school. When Lucie Mackey Grant, a daughter-in-law of Julia Grant, died in 2007, none of the Grant heirs remained to fund the school. Since then, Regis has relied primarily on the original endowment and alumni donations to keep the school tuition free. Following Lucie Mackey Grant's death, at an auction of historic items held by the Grant family, Regis bid successfully for the original golden chalice used in Mass when the school was founded in 1914.[8]

On Saturday, May 14, 2011, a two-alarm fire destroyed the school's principal gymnasium and did some peripheral damage. The school re-opened the following Tuesday.[9]

In order to apply to Regis, a prospective student must be an 8th grade Roman Catholic male living in the Tri-State Region who has demonstrated superior academic ability. Once these criteria are met, he must fill out an application, including the composition of a short essay. Then, he must sit for Regis's own admission test. Of the approximately 1,000 students who sit for this test every year, about 250 are selected for two interviews with faculty or alumni. Finally, around 135 students are admitted to Regis High School.[6] 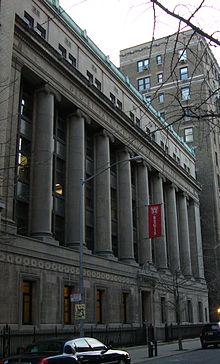 "The academic program at Regis is based on a traditional liberal arts curriculum. The first three years of the academic program are largely standard for all students. Incoming freshmen choose the language they will study. There are also some other variations which affect small groups of students. Students with sufficient elementary school preparation in algebra are placed on an advanced math track. Similarly, students with sufficient foreign language preparation are accelerated into the sophomore course. Students may also elect to take extra courses. Band/Chorus and the Science Research Project are open to a small number of sophomores and juniors. In senior year, the student is given considerably more freedom of choice. Theology and English are required for all students, but in those subjects the students choose from a group of trimester-long electives. In addition, the student chooses three year-long electives."[10]

Students must complete a curriculum in the subjects of

The curriculum is taught at an accelerated pace, using college-level textbooks and, in many classes, exceeding the requirements of the Advanced Placement curriculum. The school does not require its students to take the New York State Regents Examinations.

Many other electives are available.[11]

Sports currently available to Regis students include baseball (on the junior varsity and varsity levels), basketball (on the freshman, junior varsity, and varsity levels), cross country, soccer (on the junior varsity and varsity levels), indoor and outdoor track and field, and volleyball (on the varsity level). The school is a member of the Catholic High School Athletic Association (C.H.S.A.A.). Regis's athletic teams have seen success in recent years, including several City Championships in their division at the junior varsity and varsity levels. In 2005, the year after winning the city championship, the Varsity basketball team won the B division State Federation Championship in Glens Falls, NY, beating the best of the private and public schools of New York. Between 2006 and 2008, the Regis Baseball team, which has played in the A division for only 6 years, finished 3rd, 2nd, and 3rd respectively. This streak of top 3 finishes is a feat no other CHSAA A division school has accomplished since Regis joined the league. Senior Christopher Bates was drafted in the 15th round of the 2010 MLB First-Year Player Draft by the Milwaukee Brewers. Also, in 2009, the varsity Volleyball team won the CHSAA championship over league rival Xaverian and made it to the final again in 2010 in an attempt to defend their title.

Golf and tennis were offered until the 2007-2008 season, and non-competitive tennis is now offered as an extracurricular.

Students who attend Regis have many extracurricular activities to select from in addition to athletics. The school carries with it a strong debate tradition, and as such the most popular activity is the speech and debate team, known as "The Hearn" (named for Fr. David Hearn, S.J.). The team competes on state and national levels in Lincoln-Douglas Debate, Public Forum Debate, Student Congress, Extemporaneous speaking, Declamation, Duo Interpretation, and other forms of dramatic interpretation of literature. The Hearn is atypically large for a high school debate team (roughly 40% of the student body is on the team), and is considered one of the best high school teams in the United States. The Hearn's most notable achievements include: 18 state championships in the past 24 years, producing national champions in every single speech and debate category, 5 national collegiate debate champions and one world collegiate champion. A $2.5 million endowment was created in 2008 for the debate society's exclusive use.[12]

There are also various publications that students can work on, such as the newspaper (The Owl) and yearbook (The Regian) as well as several literary publications. Regis Repertory stages a musical in the fall and a drama or comedy in the spring, relying on the efforts of over 90 students in the cast, stage crew, business staff, and band. Recreational clubs include the Flag Football League, Billiards Club, Games Club, Rock Music Club, Tennis Club, Yoga Club, and various cultural and special interests/political clubs. The Regis Historical Society, in addition to being a forum for general and school-specific historical debate, publishes its own journal, Cliographia. The Owl interviewed CIA Leak case prosecutor and alumnus Patrick J. Fitzgerald in 2006. The subsequent article was linked on the Drudge Report and quoted in an Associated Press article.[13][14]

Regis High School has been used in several television shows and movies: