king of United Kingdom
verifiedCite
While every effort has been made to follow citation style rules, there may be some discrepancies. Please refer to the appropriate style manual or other sources if you have any questions.
Select Citation Style
Share
Share to social media
Facebook Twitter
URL
https://www.britannica.com/biography/George-IV
Feedback
Thank you for your feedback

Join Britannica's Publishing Partner Program and our community of experts to gain a global audience for your work!
External Websites
Britannica Websites
Articles from Britannica Encyclopedias for elementary and high school students.
Print
verifiedCite
While every effort has been made to follow citation style rules, there may be some discrepancies. Please refer to the appropriate style manual or other sources if you have any questions.
Select Citation Style
Share
Share to social media
Facebook Twitter
URL
https://www.britannica.com/biography/George-IV
Feedback
Thank you for your feedback 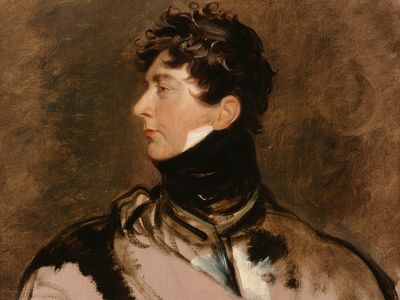 The eldest son of George III and Charlotte Sophia of Mecklenburg-Strelitz, he had become by age 17, as he said, “rather too fond of women and wine.” His way of life and his close friendship with Charles James Fox and other loose-living Whig politicians caused his father to regard him with contempt. In 1784 the prince met the only woman whom he ever deeply loved, Maria Fitzherbert, whom he married secretly on December 15, 1785. The marriage, however, was invalid: members of the royal family under the age of 25 were forbidden to marry without the king’s consent.

On April 8, 1795, in order to induce Parliament to pay his debts, the prince contracted a loveless marriage with his cousin Caroline, daughter of the Duke of Brunswick and of George III’s sister Augusta. A few weeks after the birth of their only child, Princess Charlotte (1796–1817), the couple separated. A few months after George IV’s accession in 1820, Caroline, who had been living in Italy since 1814, returned to claim her rights as queen consort. A bill to deprive her of those rights and to dissolve the marriage on the ground of her adultery was introduced into the House of Lords but was never put to a vote in the Commons. The problem was solved by Caroline’s death on August 7, 1821.

In November 1810 George III became permanently insane, and shortly afterward the prince became regent under the terms of the Regency Act (1811). In February 1812, when the restrictions of that statute expired, George decided to retain his father’s ministers rather than appoint survivors from among his old Whig friends (Fox had died in 1806). His decision benefited the nation, because the 2nd Earl Grey and other leading Whigs were prepared to abandon the war with France and leave Napoleon the master of the European continent. As it was, Great Britain and its allies finally triumphed over Napoleon in 1815. George IV’s accession on the death of his father did not add to the powers that he had possessed as regent.

He insulted and intrigued against the 2nd Earl of Liverpool, prime minister from 1820 to 1827. George Canning, who became foreign secretary in 1822 and prime minister in 1827, won George’s approval, partly by cultivating the friendship of Sir William Knighton, the king’s physician and keeper of the privy purse, on whose advice George relied excessively. But after 1827 he ceased to have any personal weight with either of the two great parties.

George IV’s character was in part redeemed by his linguistic and other intellectual abilities and especially by his astute judgment in the arts; he patronized the architect John Nash, who developed Regent Street (1811–c. 1825) and Regent’s Park, London; and he sponsored Sir Jeffry Wyatville’s restoration of Windsor Castle. George’s most famous effort was the exotic Royal Pavilion at Brighton with its Mughal Indian and Chinese decorations, designed by Nash.

Get a Britannica Premium subscription and gain access to exclusive content. Subscribe Now
The Editors of Encyclopaedia Britannica This article was most recently revised and updated by Adam Augustyn.