You have reached the cached page for https://www.discoverwalks.com/blog/madrid/things-to-know-about-el-palacio-real-in-madrid/
Below is a snapshot of the Web page as it appeared on 2/26/2021 (the last time our crawler visited it). This is the version of the page that was used for ranking your search results. The page may have changed since we last cached it. To see what might have changed (without the highlights), go to the current page.
You searched for: +palacio real madrid We have highlighted matching words that appear in the page below.
Bing is not responsible for the content of this page.
Things to Know about el Palacio Real in Madrid - Discover Walks Blog

Things to Know about el Palacio Real in Madrid

What To Do As a Solo Traveler in Madrid

Top 20 Facts About City of Madrid

Things to Know about El Palacio Real in Madrid

The royal palace of Madrid is a glorious castle in the city’s metropolitan center. In fact, it‘s one of the largest royal palaces in the world, and it’s a highly recommended destination to visit.

If you happen to drive by this landmark on the west side of the city, you’ll know what you’re looking at. It’s hard to mistake a mansion with 870 windows, 240 balconies and 44 staircases.

El Palacio Real de Madrid features exquisite rooms that are certainly worth visiting, like the Real Cocina, or royal kitchen. This amazing artifact looks just as it did when Queen Isabella II and Alfonso XII ordered its redecoration in 1861, and it’s only one of the historically rich elements preserved here for you to see. Keep reading for more details on what it’s like to step back in time in Europe’s grandest palace. 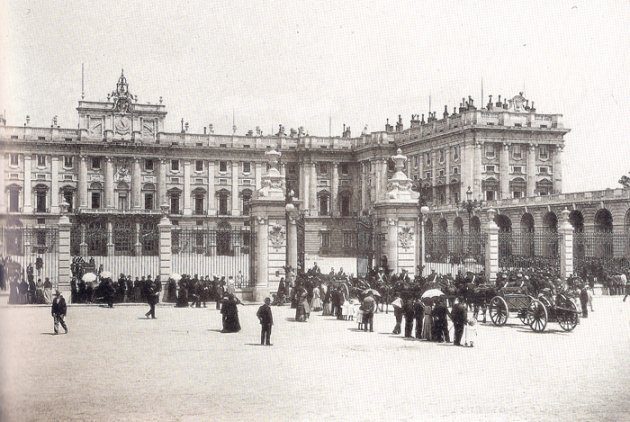 Madrid’s central palace first came to be when King Felipe V ordered its construction in the 16th century, and it was finished around 1636. But the building that existed during that time was called the Real Alcazar of Madrid, and was almost entirely destroyed by a fire in 1734.

The widespread fire destroyed 500 art canvases, the Royal Chapel’s sacred music collection, and many statues, sculptures, and political documents. Despite these major losses, some of the pieces most valuable to the crown were able to be salvaged.

Four years after the destruction, the new palace was put in place of the Real Alcazar. Since its completion, many kings have lived in el Palacio Real. Alfonso XIII was the last royal to call the palace home, ending the list of residents that began with King Charles III. 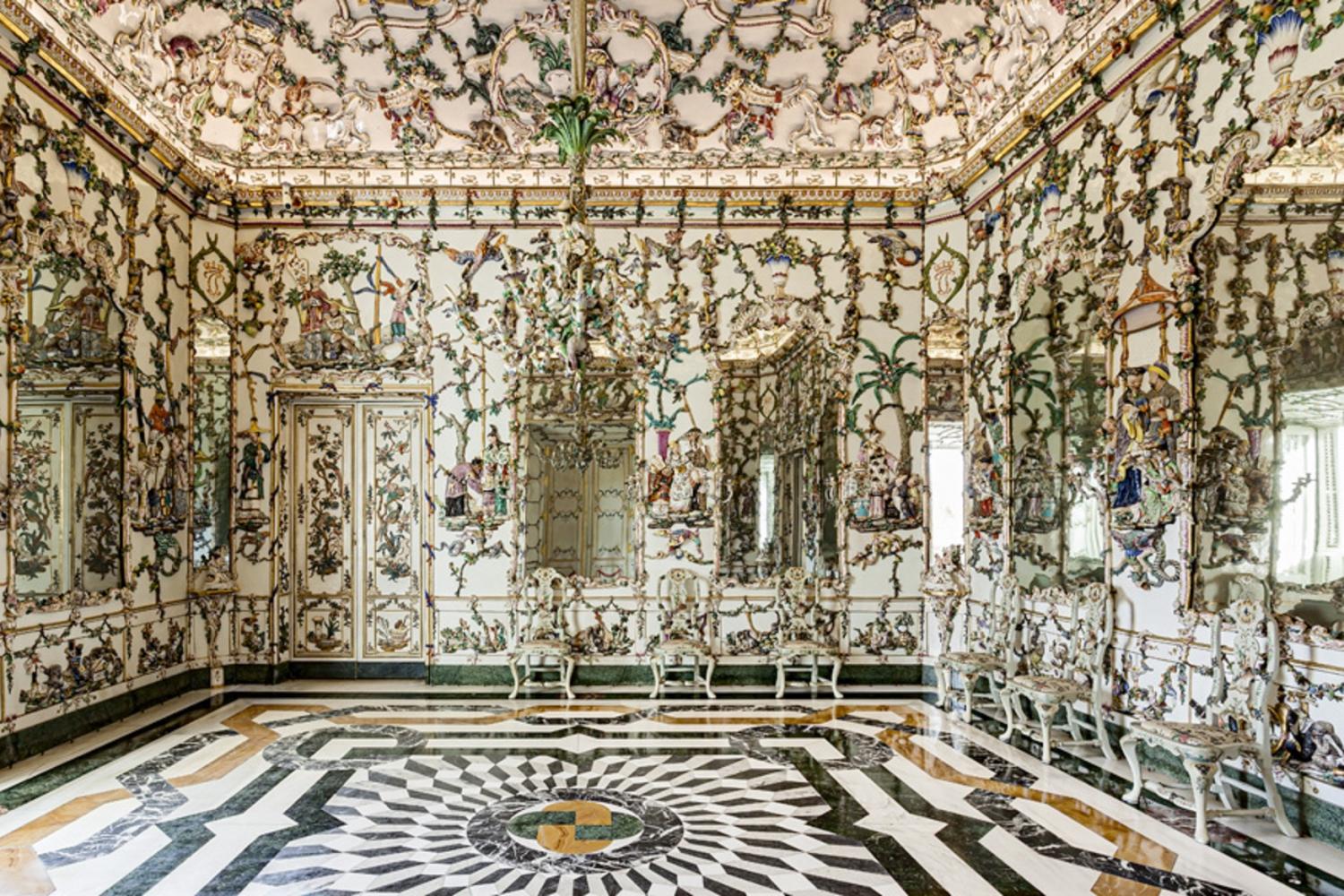 The inside of the building is just as remarkable as the magnificent façade, holding the famous work of artists like Goya, Velázquez, and Caravaggio. Aside from traditional paintings, there are also collections of classic porcelain, watches furniture, and silver.

More notably, the palace’s interior is home to la Armería Real, or the royal armor, and it’s considered to be one of the best armor collections in the world.

The incredible interior was composed of stucco and Spanish marble, accented by mahogany doors and windows, and furnished with many lavish and elegant accessories. Throughout the home, there are many brilliant chandeliers and golden mirrors.

Despite this palace being the official place of residence of previous Spanish royalty, el Palacio Real de Madrid is now uninhabited. Felipe VI, the current king of Spain, lives with his family in el Palacio de la Zarazuela, which is located farther from the city center.

While no one lives in el Palacio Real, the building is still put to use. Today, it holds many valuable pieces of art, historical artifacts, and other significant records. The palace also hosts state ceremonies, religious events, and visitors from all around the world.

There are several distinct landscapes surrounding the Palacio Real, from gardens to plazas. The expansive Plaza de la Armería leads visitors into the entrance of the palace. Nearby, the Plaza de Oriente features a statue of King Felipe VI. This one  consists of three main areas: the Central gardens, the Cabo Noval gardens, and the Lepanto gardens.

The Jardines del Campo del Moro still look identical to their 1890 style. The gardens are named, ‘the Moor’s field’, because they were once the camping site of Muslim troops in 1109 during an attempt to reconquer Madrid and restore Moorish rule to Spain.

The Sabatini Gardens are located on the north side of the palace where the royal family’s horse stables used to be. The garden was dedicated to Francesco Sabatini, an Italian architect who designed the former stables and much of the rest of the palace.

Contrarily, the Sabatini Garden design itself has French influences, which highlight the ponds, fountains, and intricate bushes that make the lovely garden look like a maze. 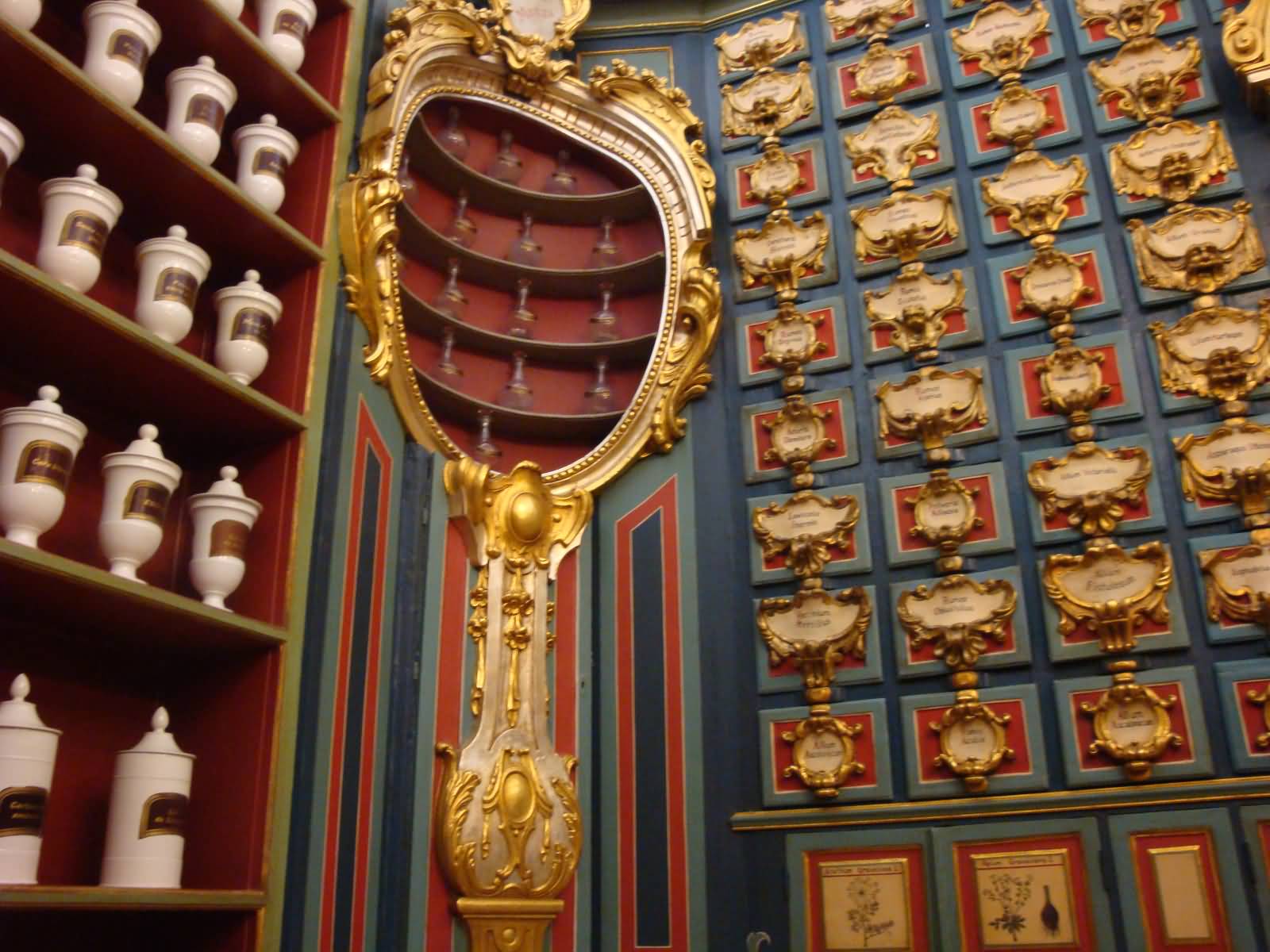 Pictured above is the dream-like royal pharmacy, and it’s only one of the enchanting rooms in the house. There is also a chamber designated as a billiard room for the game of pool.

There are a shocking 3,748 rooms in the royal palace of Madrid, at a size of 199,000 square-meters. This is actually the largest palace in Western Europe.

The fire of the original palace, the Royal Alcazar, took place between Christmas Eve and Christmas day, and the incident killed one woman. After this tragic event, the property remained empty for four years, until the current palace was commissioned to be built on top.

Every year, more than a million people come to see the spectacular palace. Visitors enter the palace at the armory collection for an exciting first impression.

In fact, those who possess a Spanish work permit or EU citizenship can actually access the amazing palace free of charge at certain times. From October to March, free admission takes place Monday to Thursday from 4 to 6pm. During the months from April to September, the window of free admission is from 6 to 8pm.

Full details on pricing, opening hours, and holiday closings can be found on their website. Admission costs 13 euros, while students receive a reduced fare of 6 euros, and professors get in free.

The palace is located in the southern center of Madrid, and it’s a short walk to the culturally-rich neighborhood, La Latina. The landmark can be reached by getting off at the Ópera metro stop, which is connected to lines 2, 5 and line R.

Additional routes such as metro stop, Plaza de España (lines 2, 3 and 10), can be taken to reach the monument, as well as numerous city bus lines like 3 and 148.

As I think you can agree, the royal palace of Madrid is considered one of the most magnificent palaces in the world. One can see just by these photos that the design and decorations of the building are awe-inspiring.

What makes this palace so special is that every aspect of the mansion is of superb quality and esteemed value, whether for the rich materials used or for the priceless value of historic objects and famous art pieces.

If you’ve learned anything from this article, it’s that the royal palace of Madrid is indeed worth visiting. Now that you’ve read about everything from the construction to the contents of the palace, you’ll know what you’re seeing when you arrive, and you’ll be ready to explore the wondrous property.

What To Do As a Solo Traveler in Madrid

Top 20 Facts About City of Madrid

To support our blog and writers we put affiliate links and advertising on our page. Read more.