You have reached the cached page for https://fromtherecamier02.wordpress.com/2017/01/09/daily-update-monday-january-9th-2017/
Below is a snapshot of the Web page as it appeared on 4/11/2021 (the last time our crawler visited it). This is the version of the page that was used for ranking your search results. The page may have changed since we last cached it. To see what might have changed (without the highlights), go to the current page.
You searched for: +nobel prize in literature wikipedia 2017 ncaa championship football score We have highlighted matching words that appear in the page below.
Bing is not responsible for the content of this page.
Daily Update: Monday, January 9th, 2017 | From The Recamier

Today is the Feast of the Baptism of the Lord, the Feast that closes out the Christmas season. Since today is the Monday after the traditional date of Epiphany, today is Plough Monday. And tonight is the College Football Playoff National Championship between #1 Alabama and #2 Clemson. (Go Tigers!)

According to the Gospels, John the Baptist humbly objected to baptizing Jesus, insisting instead that Jesus baptize him. Jesus persisted and John acceded to administer Jesus’ baptism. In accepting John’s baptism, Jesus is seen as identifying with sinful humankind and expressing his full solidarity with us. Jesus inaugurated his public ministry by stepping into the place of sinners with all our guilt on his shoulders and carrying it down into the depths of the Jordan. His baptism by John marked his acceptance of death for the sins of humankind; his coming up out of the water depicted his resurrection. The Baptism of the Lord is observed as a distinct feast in the Roman Catholic Church, although it was originally one of three Gospel events marked by the feast of the Epiphany. Long after the visit of the Magi had in the West overshadowed the other elements commemorated in the Epiphany, Pope Pius XII instituted in 1955 a separate liturgical commemoration of the Baptism, to be celebrated on January 13th. A mere fourteen years after the institution of the feast, Pope Paul VI set its date as the first Sunday after January 6th or, if in a particular country the Epiphany is celebrated on January 7th or 8th, the following Monday (as it is this year). Pope John Paul II initiated a custom whereby on this feast the Pope baptizes babies in the Sistine Chapel. This Feast of the Church marks the end of the Christmas season, and we now return to Ordinary Time, so-called because the Sundays are recorded in ordinal terms (the 3rd Sunday, the 4th Sunday, etc.) until the Season of Lent. As this is the Monday after the traditional date of Epiphany, today is Plough Monday, the traditional start of the English agricultural year. References to Plough Monday date back to the late 15th century. The day traditionally saw the resumption of work after the Christmas period. In some areas, particularly in northern England and East Anglia, a plough was hauled by a plough boy from house to house in a procession, collecting money. They were often accompanied by musicians, an old woman or a boy dressed as an old woman, called the “Bessy”, and a man in the role of the “fool”. At the frolic, or banquet, later that day, the whole village would join in Mummers’ plays. If one refused to give money, then the plough would be used to plough up the miscreant’s front yard. ‘Plough Pudding’ is a boiled suet pudding, containing meat and onions; it is from Norfolk, and is eaten to celebrate the day. The Plough Monday customs declined in the 19th century but have been revived in the 20th century; they are now mainly associated with Molly dancing and a good example can be seen each year at Maldon in Essex, a mere 4,700 hundred miles from SouthWestCentral Louisiana. The College Football Playoff National Championship is the championship game of the NCAA Division I Football Bowl Subdivision (FBS), part of the establishment of the College Football Playoff (CFP) that began at the end of the 2014 college football season. Under the prior Bowl Championship Series (BCS) format, the game was known as the BCS National Championship Game. Under the older Bowl Alliance and Bowl Coalition systems, the championship game simply used the name of the bowl game in which it was played. The participants in the title game will be the winners of two semifinal games between the nation’s top four teams, as chosen by the College Football Playoff selection committee. This year, #1 Alabama beat #4 Washington in the Chick-Fil-A Peach Bowl, and #2 Clemson beat #3 Ohio State in the Playstation Fiesta Bowl, with both games played on December 31st, 2016. The location of each year’s championship game will be determined by the playoff group’s leaders, which will consider bids to host the event from various cities and then makes a final selection, in a similar fashion to the Super Bowl or the NCAA Final Four. When announcing it was soliciting bids for the 2016 and 2017 title games, playoff organizers noted that the bids must propose host stadiums with a capacity of at least 65,000 spectators. Leaders say the championship game will be held in a different city each year, and cities cannot host both a semifinal game and the title game in the same year. The winner of the game is awarded a new championship trophy instead of the “crystal football,” which has been given by the American Football Coaches Association (AFCA) since 1986; officials wanted a new trophy that was unconnected with the previous BCS championship system. The new College Football Playoff National Championship Trophy is sponsored by Dr Pepper, which paid an estimated $35 million for the sponsorship rights through 2020. The 26.5-inch high, 35-pound trophy was unveiled on July 14, 2014. The game will be broadcast on ESPN through 2026. (Normally I pull for the SEC team, but the SEC team in this year’s matchup is coached by He Who Must Not Be Named, so Go Tigers!)

When I woke up to get ready for work on the first day of the two-week pay period I had not heard back from Julie. I did my Book Devotional Reading, and when we left the house it was 39°. On our way to work we stopped by the ATM (which was not working), and I did my Internet Devotional Reading. Once we were at the casino I called the Pharmacy and renewed three prescriptions, then checked our ours worked for the two-week pay period just ended (they were correct). I made sure to eat something, because from the time we clocked in at 3:00 am I was fasting (more anon). Richard was the Relief Dealer for Mini Baccarat, Pai Gow, and a Blackjack table, and I was on Mini Baccarat; I had three guests all day, all of whom who had left the table by 7:00 am. Richard said that he was planning on watching the College Football Playoff National Championship game, so he said we would both sign the list tomorrow.

After work we went over to the Clinic and Pharmacy; I picked up my prescriptions, then had blood drawn for lab work ahead of my appointment on January 16th with the Clinic Doctor. On our way home we stopped by McDonald’s for my lunch, as I was very hungry. When we got home I read the morning paper, and I sent a text to Julie. I then got on the computer and did a couple of Advance Daily Update Drafts for this weblog. Julie got back to me, so we are on for Tuesday (tomorrow). And I am doing my Daily Update now; when I finish this I will watch Jeopardy!, then go to bed. Our New Orleans Pelicans (14-24, 1-6) will be playing an Away NBA game with the New York Knicks (17-28, 1-3), and I will record the score of the game in Tuesday’s Daily Update. And the College Football Playoff National Championship game is tonight; I know who I think will win, and I know who I am pulling for, which are two separate and distinct things.

We have no Saints to honor tomorrow, so we will instead note that in 49 BC Julius Caesar crossed the Rubicon with his army, thereby initiating civil war in the Roman Republic. I will wake up half an hour early, and Richard and I will sign the Early Out list when we get to the casino. With any luck we will get out early; if we do, once I get home I will do my laundry, iron my casino pants, apron, and shirts, and take a nap. After lunch I will be packed and on my way to Slidell to pick up Julie, and we will spent Tuesday and Wednesday night in the City, with me taking Julie back to Slidell and booting her out of my car before I head for home on Thursday.

Our Parting Quote this Monday afternoon comes to us from Angus Scrimm, American actor. Born as Lawrence Rory Guy in 1926 in Kansas City, Kansas, in his teens he moved to California and studied drama at USC under William C. de Mille (brother of Cecil B. DeMille). He was originally a journalist and wrote and edited for TV Guide, Cinema Magazine, the Los Angeles Herald Examiner and many other publications. He also wrote liner notes for many LPs and CDs for artists ranging from Frank Sinatra to the Beatles, as well as Arthur Rubinstein and Itzhak Perlman. Scrimm won a Grammy (credited as Rory Guy, as were his early film roles) for his liner notes. His film debut came when he played Abraham Lincoln in an educational film made by Encyclopaedia Britannica, which led him to a steady career in theater, television and film. His big-screen debut was in Jim, the World’s Greatest (1976), directed by then 18-year-old Don Coscarelli. He adopted the stage name Angus Scrimm three years later for his performance in Coscarelli’s horror/sci-fi opus Phantasm, which would mark Scrimm’s permanent impression upon modern cinema. His role as the infamous Tall Man earned him the praise of critics worldwide, as well as a large following of fans. Scrimm stood approximately 6 feet 4 inches; to appear even taller when playing the Tall Man, he wore suits that were several sizes too small and platform shoes. His success in the Phantasm films (Phantasm II (1988), Phantasm III: Lord of the Dead (1994), Phantasm IV: Oblivion (1998) and Phantasm: Ravager (2016)) was parlayed into numerous other malevolent roles including the evil Dr. Sin Do in The Lost Empire (1984), a gleeful parody of himself as the hulking henchman in Transylvania Twist (1989), Vlad the Vampire King in Subspecies (1991) and the nefarious Dr. Lyme opposite Nicolas Cage and Charlie Sheen in Deadfall (1993). Scrimm did intriguing double duty as the diabolical Seer and the angelic Systems Operator in Mindwarp (1992), co-starring Bruce Campbell. He did a shock cameo in the Italian film Fotogrammi Mortali (Fatal Frames) (1996), opposite Stefania Stella and Donald Pleasence; his last movie was Phantasm: Ravager (2016) (died 2016) “At a 30th Anniversary screening of the original Phantasm (1979), one fan approached me and said, ‘You did such a fine job on this movie, you should have played Emperor Palpatine in Star Wars: Episode VI – Return of the Jedi (1983).’ For me, that was a deep honor.”

Our Next Catholic Saint / Feast

"The scent and smoke and sweat of a casino are nauseating at three in the morning. Then the soul erosion produced by high gambling - a compost of greed and fear and nervous tension - becomes unbearable and the senses awake and revolt from it." Ian Fleming, Casino Royale

Days Since My Last Call-in At Work 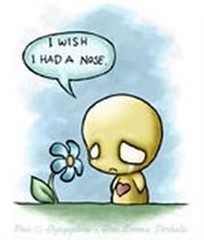 I have Congenital Anosmia, which means that I have never had a sense of smell (and never will). To the best of my knowledge, I can taste just fine. Elsewhere on this Webpage sidebar I have a Links category directing interested parties to various Congenital Anosmia places on the Internet.