You have reached the cached page for https://grammar.yourdictionary.com/grammar/verbs/what-is-mood-in-grammar.html
Below is a snapshot of the Web page as it appeared on 12/7/2021 (the last time our crawler visited it). This is the version of the page that was used for ranking your search results. The page may have changed since we last cached it. To see what might have changed (without the highlights), go to the current page.
You searched for: +night time define We have highlighted matching words that appear in the page below.
Bing is not responsible for the content of this page.
What Is Mood in Grammar? Understanding Verb Moods

What Is Mood in Grammar? Understanding Verb Moods

Mood doesn't always mean "feelings." Grammatical mood refers to the quality or form of a verb in a sentence. It denotes the tone of a verb in a sentence so the intention of the writer or speaker is clear. There are three basic verb moods: imperative, indicative and subjunctive. Take a closer look at each verb form with these explanations and examples of grammatical moods in English. 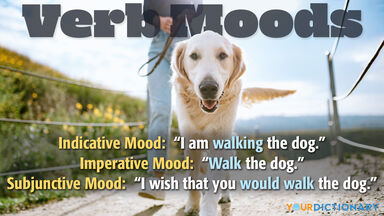 A sentence with an indicative mood expresses a factual statement, at least from the perspective of the speaker. Most sentences are written in the indicative mood, sharing facts or details that we perceive to be correct. In these sentences, the verb will express some sort of action, as a statement of fact.

Here are some examples of the indicative mood:

A sentence with an imperative mood makes a request or a command. These sentences don’t make mild suggestions. Rather, they issue a direct command, telling someone what to do.

In these sentences, the verb will express a direct call to action. Sometimes the subject “you” will be understood, as in the first example. Other times, it’ll be clear who the subject is.

Here are some examples of the imperative mood:

A sentence with a subjunctive mood expresses a condition that is doubtful, hypothetical, wishful, or not factual. The subjunctive verb in these sentences will show action, but it may not be based on reality.

Sentences in the subjunctive mood often include the phrase "If I were." The verb tends to express a doubt, wish, request, demand, proposal, or hypothetical situation.

Here are some examples of the subjective mood:

Although indicative, imperative and subjunctive moods are the main verb moods, there are several more you may encounter in English. Some reference guides would include conditional mood and interrogative mood as well as the three main moods.

Another telltale sign of the conditional mood is the “if this, then that” construct. “If/then” clearly indicates one action is dependent upon another. For example, “If she wasn’t so mean, then he would have helped her.”

Here are a few more examples of the conditional mood:

Here are some examples of the interrogative mood:

When you think of all the rhetorical devices at your disposal — alliteration, hyperbole and personification, among others — many of them help set the mood of a piece of literature. While grammatical mood does not refer to emotion or feelings, it does convey a certain tone with the mood of the verb in a sentence indicating a fact, a command, a question, a condition, or a wish. If you'd like to see how grammatical moods work in other languages, check out a guide to subjunctive, indicative and imperative moods in Spanish.