You have reached the cached page for https://darrens-world-of-entertainment.blogspot.com/2013/02/movie-43-movie-review.html
Below is a snapshot of the Web page as it appeared on 9/2/2020 (the last time our crawler visited it). This is the version of the page that was used for ranking your search results. The page may have changed since we last cached it. To see what might have changed (without the highlights), go to the current page.
You searched for: +movie 43 movie review We have highlighted matching words that appear in the page below.
Bing is not responsible for the content of this page.
Movie 43: Movie Review Skip to main content

When a film is so reviled in the critics' world and even called the Citizen Kane of awful, you always wonder where the vitriol is coming from. 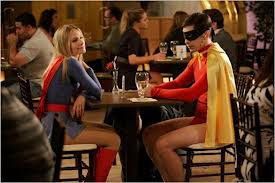 Movie 43 is such a film, and one train wreck which is rightfully receiving a major panning.

Its loose premise is that a washed up movie producer (played by Dennis Quaid) is so desperate to get his movie made, that he takes a studio executive (Greg Kinnear) hostage and forces him to listen to his crazed and deranged movie ideas.

The catch? Those pitches involve some of the biggest names in Hollywood.

If you are a fan of extremely puerile humour, and set ups that have very little pay off plus are an adolescent boy, then Movie 43 is for you. 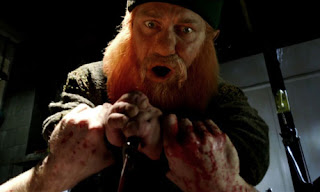 As this series of 13 "interconnected" stories are rolled out, each of them suffers from a lack of any real humour or panache that you actually begin to wonder why the actors involved (who have some pretty impressive calibre) are even part of what's playing out - do the powers that be have some real quality blackmail on the cast to use?

There's the likes of Hugh Jackman with a pair of testicles hanging from his neck, Halle Berry going to extremes for truth or dare, Gerard Butler as a leprechaun, Anna Faris begging to be pooped on by her lover - the list of degradation and bad taste goes on without a hint of humour in sight. It may be the chance for such quality actors to act in such juvenile ways proved way too beguiling, but I can't fathom why they didn't realise it just wasn't as funny as it could have been. 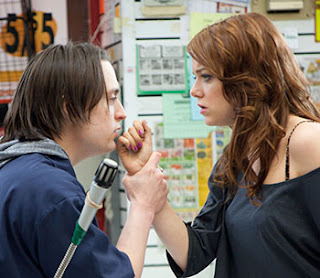 The only two segments which vaguely hit the spot are Emma Stone and Kieran Culkin as a couple trying to sort stuff out in a supermarket and an ad which claims small children working in vending machines have lives too - so, not exactly setting the bar high, but, trust me, when you see the rest of what's on offer, this is the cinematic pinnacle of this offering. Even though the segments are short, there's another terrible one lining up to take its place, with a major Hollywood star looking to lose an ounce of their own dignity.

With predictable pay offs, a lack of laughs despite occasional raunchiness, it's easy to see why Movie 43 is being roundly panned and I'd advise you to think twice about whether you want to go and see it. The attempts at gross out humour fail miserably and it makes the American Pie franchise look like Shakespeare and Benny Hill and Borat seem sophisticated.

It is, without a doubt, the worst film of 2013 - and if anything else reaches this level at any stage this year, it'll be a sad indictment of the death of the magic of cinema.

The Last Of Us Part II: PS4 Review

Wracked with but not wrecked by spoilers dropping before release, and with the weight of expectation squarely on its story, The Last Of Us Part II is a fulfilling exercise in atmosphere, as well as the tropes of the survivor genre much seen in the likes of the Walking Dead.

Naughty Dog has so ferociously guarded this release to heighten the enjoyment of fans that it's repeatedly asked for spoilers to be held close to the chest, and for story details to be kept confined as well.

It makes a review difficult in some ways, but not impossible - loosely, the game centres around Joel and Ellie once again and their life in the post-Infected world years after we last saw them. Once again, a mission rears its head and it's back into the world of The Last Of Us we go.

In many ways, The Last Of Us is very familiar to anyone who's spent a modicum of time within the survival genre, be it comics, games or TV serie…
Read more

Guy Ritchie returns to familiar territory in The Gentlemen, a crime caper that dials up the Cockney tomfoolery and violence, but which pales in comparison to Ritchie's greatest Lock, Stock and Two Smoking Barrels.

In this latest, centring around drug kingpin Mickey Pearson (an unctuous McConaughey) and his marijuana business, Ritchie spins a tale via unreliable narrator and potential blackmailer Fletcher (Grant, in a pastiche of a camp Michael Caine and tabloid editor) who tries his hand to get cash to keep Pearson's secrets.

But when Pearson wants to get rid of the dodgy dealings to spend more time with his wife Ros (Dockery, massively underused as a moll or any kind of character), it attracts the interest of the Chinese triads and their wannabe head Dry Eye (played by Crazy Rich Asians' Henry Golding)....

Picard: Review - Picard A Path that's new, but pleasingly familiar in parts, for Star Trek
There's no disputing the love there is for Captain Jean-Luc Picard, as embodied by Sir Patrick Stewart.

Easily one of the most beloved captains of the Enterprise, the star of Star Trek: the Next Generation and a few films, Picard remains a central figure to the Star Trek universe, a humane and warm creation that did much to embody Gene Roddenberry's vision for space.

So you could be forgiven for wondering why after seven years, 178 episodes and with a feeling that the story's complete, why there would be a return for the character and its 79 year old actor.

In truth, it's because there's more to say.

Which sounds like a trite bon mot, but science fiction is not always aware enough of when the time is right to turn the tap off. However, under the helm of some Pulitzer award winning writers, the first season of the show (Picard's already been renewed for a second seaso…
Read more

Darren
New Zealand
Welcome to my blog! I'm a film and games reviewer at large in New Zealand. I've been Newsroom.co.nz's movie reviewer, a former Newstalk ZB movie reviewer and have reviewed for Stuff.co.nz. I've been reviewing films for over two decades and half now. I used to do a weekly radio piece on Newstalk ZB looking at the latest films and DVD releases, have written for tvnz.co.nz and also the Lumiere Reader, as well as various sites and radio stations in the UK. In these posts, you'll get the latest movie and DVD reviews, as well as the odd game thrown in for good measure too. Add to that mix, the latest movie trailers, and you're pretty much all up to date - thanks to Darren's World of Entertainment!