You have reached the cached page for https://www.nhl.com/news/kevin-lowe-hockey-hall-of-fame-profile/c-327825718
Below is a snapshot of the Web page as it appeared on 1/5/2022 (the last time our crawler visited it). This is the version of the page that was used for ranking your search results. The page may have changed since we last cached it. To see what might have changed (without the highlights), go to the current page.
You searched for: +mike howe builders We have highlighted matching words that appear in the page below.
Bing is not responsible for the content of this page.
Lowe won with intangibles on way to Hockey Hall of Fame | NHL.com Skip to Main Content
News
Search

Lowe won with intangibles on way to Hockey Hall of Fame

Key part of Oilers dynasty led by example on, off ice 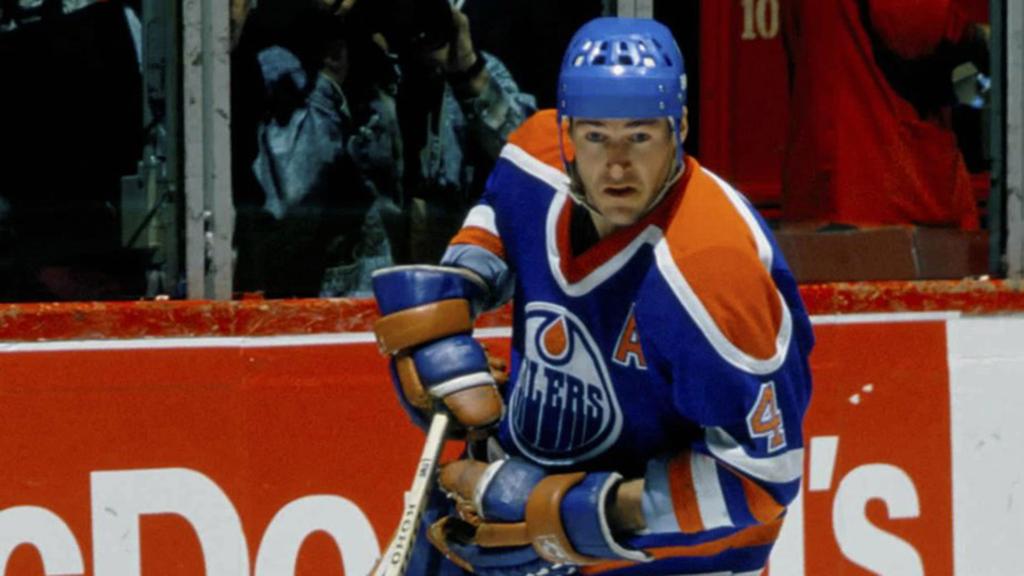 Kevin Lowe watched his No. 4 jersey being raised to the rafters at Rogers Place in Edmonton last week and realized that his two-decade wait for recognition had finally arrived.

The former defenseman was a key piece of the Edmonton Oilers dynasty that won the Stanley Cup five times (1984, '85, '87, '88, '90) and was honored for it in a span of 10 memorable days that will forge his place in hockey history.

The banner ceremony was Nov. 5, and on Monday he was inducted into the Hockey Hall of Fame, 20 years after he became eligible for the honor.

"I'd never seen myself as a Hall of Famer," Lowe said. "My dream was always to win Stanley Cups, and the Hall of Fame was something I never dreamed about so this is really cool."

Lowe was inducted in the Class of 2020 with players Jarome Iginla, Marian Hossa, Kim St-Pierre and Doug Wilson, and Ken Holland in the Builders category.

Like his jersey in Edmonton, which hangs in the rafters with those of former teammates Wayne Gretzky, Grant Fuhr, Mark Messier, Glenn Anderson, Jari Kurri and Paul Coffey, he has joined all of them in the Hall. Known as "The Group of Seven," they formed the backbone of one of the great teams in NHL history.

"What's coolest for me is that I believe they are genuinely happy about this as much as I am," Lowe said of his Hall induction.

"I'm not the elite status of those players but you don't win a lot of championships without the whole mix and I think they realize my participation and contribution to everything they did. Hall of Fame worthy? Certainly, in their minds."

Lowe's value to those teams is symbolized in a painting depicting "The Group of Seven" presented to him by the Oilers on the night his banner was raised. It's no coincidence that his image is in the middle of the portrait, with three players on either side of him.

"He was the center of the group because that's the way his teammates saw him," Oilers chairman Bob Nicholson said of the painting.

"We all wanted to win bad," said Gretzky, who was inducted into the Hall in 1999. "You don't have the success we had without feeling that way. But Kevin was that way more than anyone. He was the guy that pushed us."

Lowe said he understands why his wait to get into the Hall was so long, especially with his modest point totals.

The 62-year-old scored 431 points (84 goals, 347 assists) in 1,254 regular-season NHL games and 58 points (10 goals, 48 assists) in 214 Stanley Cup Playoff games for the Oilers and New York Rangers. He's played more games (1,037) than anyone in Edmonton history. In addition to the five championship teams he was a part of in Edmonton, he was also a member of the 1994 Stanley Cup-winning Rangers.

For his former teammates, those numbers don't begin to tell the whole story.

"It's so awesome that he's going in," said Fuhr, a goalie who was inducted into the Hall in 2003. "I mean, it's a reward for his full body of work.

"I think that's the big thing. It's not always the guys who are scoring goals. There are other intangibles to the game."

"Here's an example," Fuhr said. "How many guys would lay down and consistently try to block an Al MacInnis shot? You could count on one hand how many guys would do that. We had a lot of tough games in those Battle of Albertas against the Calgary Flames and this guy had one of the hardest shots ever. It's one of the reasons he's in the Hall too. And Kevin would constantly put his body on the line to do that. It's one of my lasting memories of Kevin. There's nothing on the stats page that measures courage like that.

"He brought a lot of fire to our team. I think that was one of the big things. As a young guy watching that every day, getting to see him practice every day, how he played every day at 110% he was great to learn from. We had a high-powered offense that took a lot of chances because of all the elite talent we had so it was nice to have a guy like him back there.

"To me, he was one of the better defensive defensemen of that era or of any era."

Not bad for a kid who grew up in Lachute, Quebec, 50 miles northwest of Montreal. His family owned a business, Lowe's Dairy, and he was put to work at a young age, starting with cleaning up the garbage at the ice cream bar.

"It's where you learned work ethic," he said. "There weren't many family vacations, if any."

Lowe began establishing himself as an elite prospect during his three seasons with Quebec of the Quebec Major Junior Hockey League beginning in 1976. In 1978-79 he became the first English-speaking captain in QMJHL history. In 2004 the league introduced the Kevin Lowe Trophy awarded to the best defensive defenseman in the QMJHL.

He was selected No. 21 by the Oilers in the 1979 NHL Draft and quickly was befriended by Gretzky, who suggested the two become roommates. He was immediately taken under the wings of veteran defensemen Colin Campbell and Lee Fogolin.

"I'd been in the League six, seven years, so I think I could make the determination of who was not only a good player but a good person," Campbell said. "I could tell Kevin was all that. He came from good stock. He had good character and good fight in him. He wasn't a Paul Coffey type; he was just a good all-around defenseman with great leadership qualities."

Campbell pointed to a moment 15 years later during Game 7 of the 1994 Eastern Conference Final between the Rangers and New Jersey Devils as an example.

The Rangers were attempting to win the Stanley Cup for the first time since 1940 and were loaded with former Oilers -- Lowe, Messier, Anderson, Craig MacTavish, Jeff Beukeboom, Adam Graves and Esa Tikkanen.

The Rangers led 1-0 late in the deciding game, but Devils forward Valeri Zelepukin scored the equalizer with eight seconds left. Campbell, an associate on coach Mike Keenan's staff, wondered how the team would react heading into overtime.

"There was a saying at the time that there was a jinx on the franchise dating way back that had kept the franchise from winning a Cup," Campbell said. "I thought it was a lot of hocus pocus. Then the Devils scored, and I couldn't believe it. I asked myself 'If I feel bad, how are the players feeling?"

"I walked into the room getting ready to talk to the players and there was Kevin, speaking up, rallying the players just like we needed him to," Campbell said. "Other players were down but Kevin was mad. He handled it. We ended up winning the game and went on to win the Cup. They called us 'Edmonton East' because of all the former Oilers we had, and Kevin was a big part of that.

"I had the pleasure of playing with and coaching Wayne and Mark. They were great. But Kevin, he was the one that stirred the drink. He was the one they'd follow. He was the No. 1 leader. 'Mess' was a leader in his own way, but Kevin had the ability to bring everyone together and say the right thing at the right time."

Gretzky said Lowe showed as much leadership by example as he did with his words. He pointed to the 1988 playoffs when his friend played with a wrist fracture and, for the final three rounds, fractured ribs.

Lowe retired as a player in 1998 and became an assistant for the Oilers before becoming coach in 1999. He became Edmonton's general manager the following season and, in 2008-09, was promoted to president of hockey operations. In 2015 he was named vice-chairman of Oilers Entertainment Group.

"Whatever team he's been a part of, whatever his role whether as a player or in management, Kevin's been a winner," said Craig Simpson, Lowe's former Oilers teammate. "And he's also the guy that brings the team together. Those Oilers teams had a good time on and off the ice. They were like family. And Kevin looked out for them. The next day after a celebration, he'd be the guy who'd say, 'That was a lot of fun, now it's time to get to work.'"

Simpson was the master of ceremonies when Lowe's banner was raised and said his friend, normally not one to chat a lot in public, was relaxed and looked at peace with himself.

"For me the Hall of Fame was Bobby Orr, Jean Beliveau, Gordie Howe, Wayne Gretzky, Mark Messier," Lowe said. "While I know there are players of my ilk in the Hall of Fame, and it's a place for everyone, I wouldn't say I was disappointed in the years I didn't get in, but I certainly had come to the realization and understood that you had to put up more points and win awards.