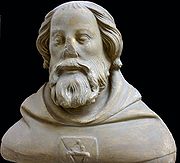 Matthias of Arras (1290? Arras - 1352 Prague, sometimes spelled as Matthew of Arras, Czech Matyáš z Arrasu) was a French architect, famed for his work on St. Vitus Cathedral in Prague.

Little is known about his early life. In 1344 he was summoned to Prague from the papal court of Avignon by Charles IV to lead works on the newly founded Saint Vitus Cathedral. He is also widely recognized as the architect of Karlstein Castle, although this fact is not fully authenticated. His involvement in the design of the New Town of Prague is also not completely certain.

When Matthias died in 1352, Saint Vitus Cathedral was not yet completed. The role of its master mason and Charles' head architect fell to then twenty-three years old Peter Parler.

All translations of matthias of arras