1.a wall hanging of heavy handwoven fabric with pictorial designs

ArrasAr"ras (�), n. [From Arras the capital of Artois, in the French Netherlands.] Tapestry; a rich figured fabric; especially, a screen or hangings of heavy cloth with interwoven figures.

Behind the arras I'll convey myself. Shak.

ArrasAr"ras, v. t. To furnish with an arras. Chapman.


Please do not confuse with Arras in Albania, for other uses see Arras (disambiguation)

Arras (French pronunciation: [aʁɑːs]; Dutch: Atrecht) is the capital of the Pas-de-Calais department in northern France on the Scarpe river. The historic centre of the Artois region, its local speech is characterized as a Picard dialect. Unlike many French words, the final "s" in the name should be pronounced.

Arras was founded on the hill of Baudimont by the Belgic tribe of the Atrebates, who named it Nemetacum or Nemetocenna in reference to a nemeton (sacred grove) that probably existed there. It was later renamed Atrebatum by the Romans, under whom it became an important garrison town.[1][2]

The town's people were converted to Christianity in the late 4th century by Saint Inoccent, who was killed in 410 during a barbarian attack on the town. Around 130 years later, St. Vedast (also known as St. Vaast) established an episcopal see in the town and a monastic community, which developed during the Carolingian period into the immensely wealthy Benedictine Abbey of St. Vaast. The modern town of Arras initially grew up around the abbey as a grain market. Both town and abbey suffered during the 9th century from the attacks of the Vikings, who later settled to the west in Normandy. The abbey revived its strength in the 11th century and played an important role in the development of medieval painting, successfully synthesising the artistic styles of Carolingian, Ottonian and English art.[3]

In 1025 a Catholic council was held at Arras against certain Manichaean (dualistic) heretics who rejected the sacraments of the Church. In 1097, two councils, presided over by Lambert of Arras, dealt with questions concerning monasteries and persons consecrated to God. In this time, Arras became an important cultural center, especially for the group of poets who came to be known as trouvères. One particular society of such poets was later called the Puy d'Arras.

The town was granted a commercial charter by the French crown in 1180 and became an internationally important location for banking and trade. The wool industry of Arras, established in the 4th century, became of great importance during the Middle Ages. By the 14th century it had gained renown and considerable wealth from the cloth and wool industry, and was particularly well known for its production of fine tapestries—so much so that in English and Italian the word "arras" (in Italian, "arazzi") was adopted to refer to tapestries in general.[3] The patronage of wealthy cloth merchants ensured that the town became an important cultural centre, with major figures such as the poet Jean Bodel and the troubadour Adam de la Halle making their homes in Arras.

The ownership of the town was, however, repeatedly disputed along with the rest of Artois. During the Middle Ages, possession of Arras passed to a variety of feudal rulers and fiefs, including the County of Flanders, the Duchy of Burgundy, the Spanish branch of the House of Habsburg and the French crown. The town was the site of the Congress of Arras in 1435, an unsuccessful attempt to end the Hundred Years' War that resulted in the Burgundians breaking their alliance with the English. After the death of Duke Charles the Bold of Burgundy in 1477, King Louis XI of France took control of Arras but the town's inhabitants, still loyal to the Burgundians, expelled the French. This prompted Louis XI to besiege Arras in person and, after taking it by assault, he had the town's walls razed and its inhabitants expelled, to be replaced by more loyal subjects from other parts of France. In a bid to erase the town's identity completely, Louis renamed it temporarily to Franchise. In 1482, the Peace of Arras was signed in the town to end a war between Louis XI and Maximilian I of Austria; ten years later, the town was ceded to Maximilian and was bequeathed to the Spanish Habsburgs as part of the Spanish Netherlands.[4][5]

The Union of Atrecht (the Dutch name for Arras) was signed here in January 1579 by the Catholic principalities of the Low Countries that remained loyal to king Philip II of Habsburg; it provoked the declaration of the Union of Utrecht later the same month.

Grand Place of Arras in February 1919

During the First World War, Arras was near the front and a series of battles were fought around the city, and nearby Vimy Ridge. A series of medieval tunnels beneath the city, linked and greatly expanded by the New Zealand Tunnelling Company, became a decisive factor in the British forces holding the city.[6] The city, however, was heavily damaged and had to be rebuilt after the war. In the Second World War, during the invasion of France in May 1940, the town was the focus of a major British counter attack. The town was occupied by the Germans and 240 suspected French Resistance members were executed in the Arras citadel.

In September 1993 Ipswich and Arras became twin towns, and a square in the new Ipswich Buttermarket development was named Arras Square to mark the relationship.[7] 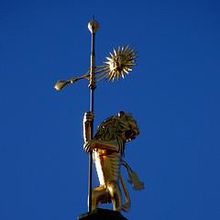 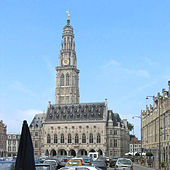 The town hall and its belfry

Market in the Place des Héros 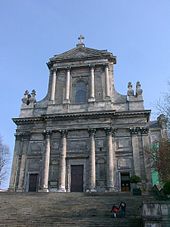 The centre of the town is marked by two large squares, the Grande Place and the Place des Héros, also called the Petite Place. These are surrounded by buildings largely restored to their pre-war World War I conditions. Most notable are the Gothic town hall (rebuilt in a slightly less grandiose style after the war) and the 19th-century cathedral.

The original cathedral of Arras, constructed between 1030 and 1396, was one of the most beautiful Gothic structures in northern France. It was destroyed in the French Revolution.

Many of Arras's most notable structures, including the museum and several government buildings, occupy the site of the old Abbaye de Saint-Vaast. The abbey's church was demolished and rebuilt in fashionable classical style in 1833, and now serves as the town's cathedral. The design was chosen by the one-time Abbot of St Vaast, the Cardinal de Rohan, and is stark in its simplicity, employing a vast number of perpendicular angles. There is a fine collection of statuary within the church and it houses a number of religious relics.

The Vimy Memorial is a memorial just north of the town honouring a major World War I battle, the Battle of Vimy Ridge, which marked the first time Canada fielded an entire army of her own. Four Canadian divisions fought there on Easter weekend 1917. The Battle of Vimy Ridge was part of the broader Allied offensive in April known as the Battle of Arras. Vimy was the only victory the Allies would enjoy during their 1917 spring offensive. The Basilica of Notre Dame de Lorette cemetery, overlooking the nearby village of Ablain-Saint-Nazaire, likewise stands before one of France's largest World War I necropolises. Part of an extensive network of tunnels dug in World War I by British Empire soldiers can be visited at the Carrière Wellington museum in the suburbs.

The Main Square Festival is held in Citadelle Vauban, attracting tens of thousands of attendees and playing host to major acts such as The Chemical Brothers, Coldplay and The Black Eyed Peas. 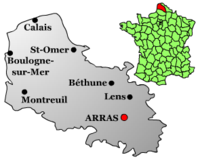 The position of Arras

The Gare d'Arras railway station is served by a purpose-built branch of the LGV Nord high speed railway, with regular TGV services to Paris. There are also regular trains to Lille, Amiens, Dunkerque and several regional destinations. The A1 motorway connects Arras with Lille and Paris, the A26 with Calais and Reims.

Arras was one of the centers of trouvère poetry, and trouvères from Arras include:

Arras was the birthplace of:

All translations of Arras