You have reached the cached page for https://www.dailymail.co.uk/news/article-1305667/Couple-left-pedigree-dog-bake-death-car-went-beach.html
Below is a snapshot of the Web page as it appeared on 5/30/2021 (the last time our crawler visited it). This is the version of the page that was used for ranking your search results. The page may have changed since we last cached it. To see what might have changed (without the highlights), go to the current page.
You searched for: +matthew knight instagram pictures leaked We have highlighted matching words that appear in the page below.
Bing is not responsible for the content of this page.
Couple left pedigree dog to bake to death in car while they went to the beach | Daily Mail Online

A dog baked to death after its owners left it in a roasting car while they went to the beach.

The Pekinese puppy's body temperature soared to 42c (110f) in just 45 minutes as the 23c (73f) conditions outside heated the car up like an oven.

Its owners had left a window of the Vauxhall Vectra slightly open for the dog, called Hermes, during a sunny day trip to Bournemouth, Dorset, in May this year. 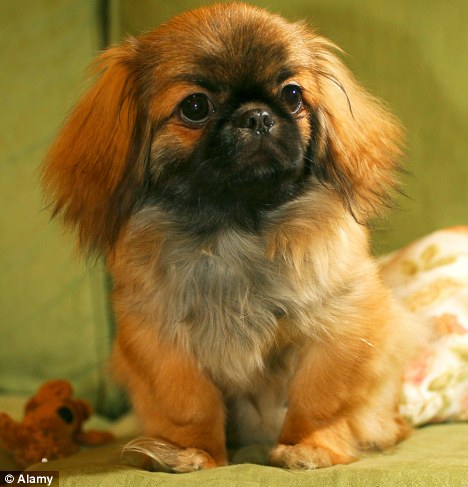 The Pekinese puppy called Hermes, similar to the one pictured, was left by owners Hamidreza Khassafi and Mandana Bohlool. Passers by called the police who broke into the vehicle and rushed it to the vet

Concerned passers-by soon spotted the one-year-old mutt in distress and called the police who arrived and broke into the car to rescue it.

They found the creature was panting heavily, had its tongue hanging out and was in a state of paralysis due to its condition.

It was rushed to a vets but died hours later from heat stroke.

Its owners Hamidreza Khassafi, 26, and Mandana Bohlool, 23, were prosecuted by the RSPCA for animal cruelty.

Bournemouth magistrates heard that the couple had arrived in the town at 3.45pm on May 23 and initially took Hermes to the beach with them.

But upon finding out that dogs were not allowed on the beach they returned it to the baking hot car and left it there.

Matthew Knight, prosecuting for the RSPCA, said that the dog's temperature was well over 42C compared with a normal body temperature of 38C. 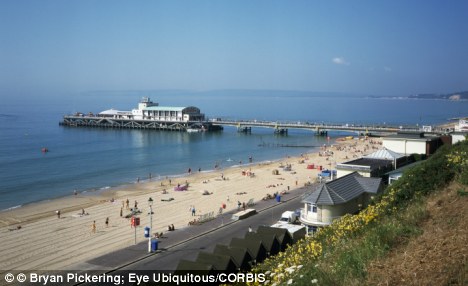 The owners had intended to take Hermes with them but realised dogs were not allowed on the beach. The incident happened in Bournemouth, Dorset, during May this year

He said: 'We found Hermes in a very distressed state, panting, tongue well extended and didn't appear to be able to retract it.

'In the opinion of vets, leaving the dog in a car on such a hot day would have caused the dog severe and physical distress.'

The couple, formerly of Eastleigh, Hampshire, but now of Wakefield, West Yorkshire, pleaded guilty to causing unnecessary suffering to an animal under section 4 of the Animal Welfare Act.

They were ordered by Bournemouth magistrates to pay more than £900 each and disqualified from keeping a dog for three years.

Mike Carreras, defending, said the defendants had intended to take Hermes with them until they spotted the notices banning dogs.

He said the dog, a valuable pedigree, was otherwise healthy and well-fed.

Mr Carreras added: 'It is a case of two young people with a beloved dog who simply didn't think about the consequences of leaving a dog where they did.

'They weren't expecting to be away for long.'

Sobbing, Bohlool told the court she felt 'remorse' adding: 'I haven't forgiven myself for what has happened.'

Khassafi said: 'We loved the dog just like our child.'

In sentencing magistrates said the couple had been 'negligent' which had caused the dog's death.