You have reached the cached page for https://wal-martt.blogspot.com/2013/10/christina-applegates-husband-martyn.html
Below is a snapshot of the Web page as it appeared on 4/7/2021 (the last time our crawler visited it). This is the version of the page that was used for ranking your search results. The page may have changed since we last cached it. To see what might have changed (without the highlights), go to the current page.
You searched for: +martyn lenoble arrested We have highlighted matching words that appear in the page below.
Bing is not responsible for the content of this page.
wal-mart: Christina Applegate’s husband Martyn LeNoble detained, frisked by cops after paparazzi fight 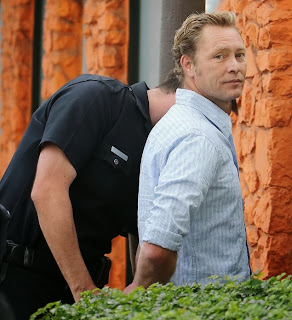 Christina Applegate’s rocker hubby was detained and frisked Los Angeles cops Sunday after an altercation with a paparazzo taking photos of his toddler daughter.

Martyn LeNoble, 44, confronted the photographer outside a popular indoor playground called The COOP in Studio City to object to the snaps of his 2-year-old tot and famous wife.

Musician Martyn LaNoble was released after being questioned by cops.

No witnesses were able to corroborate the claim, the officer said “Mr. LeNoble said the photographer wouldn’t back off, and he was worried because he’s gotten death threats in the past. He just didn’t know who the guy was who was getting so close,” Officer J. Ransom told The News.

Christina Applegate and Martin LeNoble are parents to a 2-year-old daughter. (LeNoble) said they chest bumped each other and walked away,” Officer Ransom said.

Martyn LeNoble speaks with police officers after the alleged incident.

“He started taking pictures of my child,” LeNoble told police in the interview posted on TMZ.com. “I went outside to talk to him, and he got physical with me…He wouldn’t back off.”
LeNoble said he believed the photographer was trying to “provoke a fight” to get more photos he could sell for even more money.

Martyn LeNoble told cops he approached the paparazzo who was taking pictures of his child.

He claimed the pap invited him to go to a “back alley and fight.” Let’s see what kind of man you are,” the photographer allegedly said, according to LeNoble.

The rocker has joined a growing number of celebrity parents trying to keep paparazzi away from their kids.
Actresses Halle Berry and Jennifer Garner testified before California state lawmakers about photographers turning their tots into tabloid fodder and helped pass a new law that takes effect in January.

Under the new bill, photographers who harass the children of public figures will face up to a year in county jail and a fine up to $10,000.
Posted by Unknown at 03:16