You have reached the cached page for https://www.amazon.com/Little-Britain-USA-Matt-Lucas/dp/B001G0NK28
Below is a snapshot of the Web page as it appeared on 1/22/2021 (the last time our crawler visited it). This is the version of the page that was used for ranking your search results. The page may have changed since we last cached it. To see what might have changed (without the highlights), go to the current page.
You searched for: +little britain usa tv series We have highlighted matching words that appear in the page below.
Bing is not responsible for the content of this page.
Amazon.com: Little Britain USA: Matt Lucas, David Walliams: Movies & TV 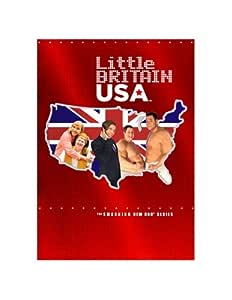 Matt Lucas (Actor), David Walliams (Actor) Rated:
NR
Format: DVD
4.5 out of 5 stars 914 ratings
Available at a lower price from other sellers that may not offer free Prime shipping.

One of the most successful British comedies of all time is coming to America! Meet Matt Lucas and David Walliams, who are bringing their smash hit Little Britain stateside with the all-new HBO series Little Britain USA. The series will feature familiar Lucas/Walliams personas from their original show, as well as new characters created expressly for this series. In addition, Little Britain USA will feature guest appearances including Paul Rudd, Rosie O’Donnell, Hayden Pantierre, and Sting.

The lewd, crude, and often nude humor of the smashingly successful British comedy series Little Britain has, thanks to HBO, made the cross-Atlantic trek--and fans around the world can rejoice. The brainchild of Brit comics Matt Lucas and David Walliams, Little Britain takes on American culture and peculiarities whilst keeping the signature Little Britain characters and savage point of view. "There are more fat people in America than there are people," the narrator solemnly drones, introducing a crazily hilarious (and borderline offensive) sketch about an overweight support group, guest-starring the big-boned American Rosie O'Donnell. No one is safe from the barbs of the writers, who trash fat people (often), gays (often), women, immigrants, disabled people, and, well, pretty much everyone else. The potty and cross-dressing humor is happily transplanted onto American soil, as is the preoccupation with overweight women and overly muscled gym rats and their naughty bits. Other targets include American gun owners, Brownie troops, and the American obsession with fitness. Extras include a too-short blooper reel, a making-of featurette, and a great series of audio commentaries by Lucas and Walliams, who crack themselves--and the viewer--up in the process. And that's a right kerfuffle. --A.T. Hurley

4.5 out of 5 stars
4.5 out of 5
914 global ratings
How are ratings calculated?
To calculate the overall star rating and percentage breakdown by star, we don’t use a simple average. Instead, our system considers things like how recent a review is and if the reviewer bought the item on Amazon. It also analyzes reviews to verify trustworthiness.

Leonard James
5.0 out of 5 stars Funny In Spite of Me
Reviewed in the United States on July 3, 2016
Verified Purchase
I remember little about the original series except for the bits of the guy who insists on being, "the only gay in the village, " but I thought I would give this one a shot. At first I thought it was just alright but I did note that, while I didn't laugh any at the first episode, I found, at the end, I had been smiling the whole time. Cleverly, the first episode was just a set up of the different characters, for what was to come in subsequent shows. There is a great arc in humor, with each episode building on the last and becoming more and more hysterical as I got what was going on. I will give a bit away in telling that some of these people are: the British Prime minister who has a crush on President Obama, the obnoxious hospital receptionist who drives everyone to frustration by refusing to do her job, the psychotic dog walker who gets herself into trouble with the police by imagining her dog is telling her to do illegal things, the man who visits his southern grandmother who turns out to be quite the perv, and the politician trying to explain away, to the press, various sex scandals, while his wife stands mum by his side. The opening introduction to each episode is different so be sure to listen and each has a surprise guest person. The live audience sequences are directed by David Schwimmer and the voice overs, done by Tom Baker, sound for all the world like Patrick Stewart. Great fun, actually, in spite of my first impression. Do at least two whows before you make up your mind. Well, I must be off, as I have a lot of lady things to do (you will get that later).
Read more
One person found this helpful
Helpful
Report abuse

bsg2004
5.0 out of 5 stars Old and new characters make this another great season
Reviewed in the United States on December 18, 2009
Verified Purchase
This is a another great funny+edgy comedy season, getting a rejuvenating boost from the addition of new characters to the mix. As usual, six episodes are never enough - but then again, we don't want them to water it down just to have more episodes. I just hope there will be more Little Britain one way or another!

Almost all of the UK characters had a great "translation" to the HBO version, except for perhaps Sebastian who, in my opinion, did not quite click as Prime Minister. Most of the new US characters were funny, including the living-in-the-past astronaut, the hunters, and the Southern grand-ma. The Starbucks-within-a-Starbucks was very poignant.

Being on HBO was great for Little Britain USA as it allowed Matt and David to push the comedy envelope without fear of interference from jumpy executives on cable and network TV.

For new viewers, I recommend starting from the first UK season and watching them in sequence, so you can get a better feel of the characters.

DVD Extras
==========
1. Deleted scenes (about 20 minutes)
2. Making of documentary also featuring the guest stars (about 12 minutes)
3. Bloopers (short)
4. Commentary track on all six episodes and the deleted scenes
5. Character playlist on each DVD

Hawkeye
5.0 out of 5 stars Hey no worry of a British invasion here BUT pure evil comedy ahead!
Reviewed in the United States on April 17, 2017
Verified Purchase
Man was I happy to find this show here. Wasn't too happy about my wife buying the season but hey now we enjoy it even more. If you never saw these two raunchy stupid grown actors then you're missing out! ZThis is on par with Benny Hill, not the same kind of humor or acting but rather same kind of defying the rules and using the British proper self-worth in a hilarious humiliating way. Not for everyone but if my wife, who has never liked British comedies can laugh at it and want more, then I think any open-minded person can.
Read more
2 people found this helpful
Helpful
Report abuse

Lloren B.
4.0 out of 5 stars Not as funny as the British shows
Reviewed in the United States on October 24, 2016
Verified Purchase
Not as funny as the British shows... Something gets lost in the conversion... i.e.. Viki Pollard speaks much slower and not in her regular slang, Dafyd doesn't work when he's not in a small image ( lol... well doesn't work their either but it's more believable ) and Walliams playing the Prime Minister as gay is not as funny as when he's the secretary hitting on the oblivious PM..... As a fan, I still found myself laughing out loud
Read more
One person found this helpful
Helpful
Report abuse

K.A. Remington
4.0 out of 5 stars Loved it and wished it would never end!
Reviewed in the United States on August 14, 2015
Verified Purchase
Clearly a higher budget and more polished evolution of the first 3 seasons. Even though the series is pushing 10 years old, it stands the test of time and enjoyably 'rips' the U.S. a well deserved new one. Certainly the lads pushed boundaries yet further, but one or two of the skits nearly made me queasy. Still loved it and wished it would never end. Thank goodness for "Come Fly with Me"... still longing for more from these two comic geniuses.
Read more
Helpful
Report abuse

David Roberts
3.0 out of 5 stars This Series is a Riot British Style
Reviewed in the United States on September 10, 2015
Verified Purchase
I am British myself so I am likely to be a little biased. However, these two guys are a riot in some things they do, but in this Little Britain series things are a little repetitive each time. But if you can get to see it on Amazon or Netflix it won't cost you anything. The series is good, but a little coarse in places. Best to watch them one a week.
Read more
One person found this helpful
Helpful
Report abuse

Londonnoise
3.0 out of 5 stars Past it's Prime
Reviewed in the United States on December 30, 2013
Verified Purchase
By now, Matt and David's innovative sitcom had seen it's best days, but there's still some laughs to be had here. For instance, just show an American person 'Bitty' and look at their face. Similar to the faces of the family in the episode.
The gimmick of taking the show to the USA gives it just about enough 'newness' to carry it through one more series, but the same characters are beginning to grate slightly and the new ones just don't have the same surprise value as before. Still, it's worth a look and essential for completists.
Read more
One person found this helpful
Helpful
Report abuse

Dana Sion
5.0 out of 5 stars Ah' two cultures coming together
Reviewed in the United States on May 8, 2015
Verified Purchase
I love this series better than cupcakes.....better than butterflies... better than....ah' you have to watch to get this joke.
The show is so ridiculous it's hilarious and well worth watching for some very silly fun when you do not want to watch something but do not want to get into a complex drama or story.
Read more
One person found this helpful
Helpful
Report abuse
See all reviews

C R
5.0 out of 5 stars Second-hand but great! No issues
Reviewed in the United Kingdom on November 9, 2020
Verified Purchase
Excellent quality, works very well! Was a bit skeptical about the quality due to being second-hand but no issues at all!
Read more
Report abuse

Jonathan A.
5.0 out of 5 stars Five Stars
Reviewed in the United Kingdom on April 14, 2018
Verified Purchase
Fantastic DVD and vendor. As described being As New :-)
Read more
Report abuse

Mrs. Jill Jennings
5.0 out of 5 stars Champagne, CHAMPAGNE FKR EVERYONE
Reviewed in the United Kingdom on January 27, 2019
Verified Purchase
Amazing for those who love the show, and doesn’t live in the USA!
Read more
Report abuse

Reece Cassar
5.0 out of 5 stars Excellent comedy
Reviewed in the United Kingdom on January 16, 2014
Verified Purchase
With the success of little Britain, I personally feel this version outwits its predecessor with very clever characters included and very funny moments throughout! At a bargain price as well, recommend
Read more
Report abuse
See all reviews