You have reached the cached page for https://www.amazon.com/Little-Britain-Complete-Collection-Various/dp/B000UPMZ4O
Below is a snapshot of the Web page as it appeared on 2/26/2021 (the last time our crawler visited it). This is the version of the page that was used for ranking your search results. The page may have changed since we last cached it. To see what might have changed (without the highlights), go to the current page.
You searched for: +little britain usa tv series We have highlighted matching words that appear in the page below.
Bing is not responsible for the content of this page.
Amazon.com: Little Britain: The Complete Collection (DVD): Various, Various: Movies & TV 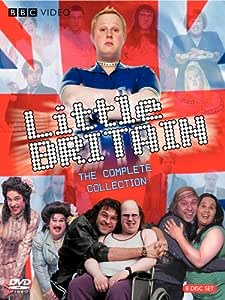 Matt Lucas, David Walliams. The entire Little Britain canon all in one collection! In addition to the regular sketch comedy series, this bonus-loaded set includes Little Britain Live as well as Little Britain Abroad. A must-have for any fan of Emily, Vicky, Daffyd, Lou and the rest! 8 DVDs. 2003-2006/color/12 hrs., 25 min/NR/widescreen.

Note on Boxed Sets: During shipping, discs in boxed sets occasionally become dislodged without damage. Please examine and play these discs. If you are not completely satisfied, we'll refund or replace your purchase.

4.7 out of 5 stars
4.7 out of 5
475 global ratings
How are ratings calculated?
To calculate the overall star rating and percentage breakdown by star, we don’t use a simple average. Instead, our system considers things like how recent a review is and if the reviewer bought the item on Amazon. It also analyzes reviews to verify trustworthiness.
Top reviews

Bruce Miller
5.0 out of 5 stars Laugh Out Loud Funny !
Reviewed in the United States on June 9, 2014
Verified Purchase
I had no idea of what to expect when I ordered this set. I was expecting a Saturday Night Live or Mad TV type of dvd set. The series was totally different; definitely for a more mature audience, crude, vulgar, suggestive, ridiculous, silly, but extremely entertaining and funny. It was the type of series that I enjoyed watching alone but would have been somewhat uncomfortable watching in the prescence of someone else. Since the skits presented are so obviously ridiculous, I was able to laugh openly. There wasn't the slightest bit of seriousness or sincerity in the entire series. I particularly enjoyed watching them to see what type of humor the UK was enjoying. Many of the skits contained "insider" type humor with references to people and movie/TV productions that I wasn't familiar with, but this had a very minor impact on the overall production and did not distract in any fashion. I have always been offended by humor at the expense of others (individuals or groups) but the manner in which this series was presented set aside any reservations on my part at being offended by the silly skits. They were designed only with the thought of laughter and not to make any social statement or have any redeeming value. I am now on the hunt for similiar presentations from the UK with similiar humor so am open to any recommendations. I recently finished "come fly with me" and thought that was a wonderful series so am hoping to find something along these lines.
Read more
5 people found this helpful
Helpful
Report abuse

N & J
5.0 out of 5 stars Nothing less than hilarious!
Reviewed in the United States on March 30, 2016
Verified Purchase
OH MY GOODNESS, this show is sooo funny! I fell in love with this show when I was in a relationship with a guy from England, and he introduced me to it. You can't help but laugh at the hilarious scenarios involving various characters of different backgrounds... all played by the same two guys! Each character is hilariously put together in a brilliant way, and no two characters are alike. Matt Lucas and David Walliams are so incredibly funny and talented, you're sure to love, and sometimes hate, their many different personas. Unless you live in the UK or are familiar with their customs, phrases, etc, you might not fully understand some of the things they talk about/refer to, but the skits are funny, nonetheless!
Read more
3 people found this helpful
Helpful
Report abuse

Mrs. George
5.0 out of 5 stars Their Little Britain and mine
Reviewed in the United States on November 4, 2011
Verified Purchase
I came across this series completely out of context, since I'm American and discovered it in a DVD box set long after the series had run its course on BBC TV and Matt Lucas and David Walliams had moved on to other things. I fell deeply in love with it right away. Then I started reading about it on the internet and discovered (a) most Americans have never heard of it, and (b) despite its massive popularity when it was first shown on the BBC a significant number of people in the UK are eager to tell the world how much they despise it and Lucas and Walliams.

I can see why some British progressives are "Little Britain" haters as much of the humor in this series, especially in the second and third seasons, is shocking and gross and relies on stereotypes that can be interpreted as sociopolitically reactionary--a teenage mom with criminal tendencies, people with fake disabilities scamming their caretakers, flamboyantly gay men annoying everybody around them. Lucas and Walliams were perhaps unwise in insisting on doing the old Peter Sellers "aren't I funny, I can play anybody" thing, even appearing as blackface minstrels in the first season. This tendency to push the outside of the envelope of what John Waters called "good bad taste" would get them in deeper trouble with their follow-up comedy series "Come Fly With Me," which I do find pretty unbearable. Coming from the land of Rush Limbaugh and "South Park," where great fortunes are built on sadism masquerading as comedy, I honestly don't think Lucas and Walliams' humor is intentionally cruel or demeaning. Let's just say they can be a little callow from time to time.

As far as the contents of this box set are concerned, I can't say enough good things about "Little Britain" the original three-season series and its companion, "Little Britain Live," a recording of the stage show that Lucas and Walliams toured the UK and Australia with at the height of the show's popularity. They are first-rate comedy and great theater by two very intelligent, original and charming performer-writers. Given the sometimes very edgy material they're acting out onscreen, it's funny how polite and decorous Lucas and Walliams are on the DVD audio commentary (although Walliams, whose naked body is much on display throughout, helpfully points out to the viewer every instance in which his genitalia are visible through his costumes.) The additional materials in this set are mostly very welcome. The pilot episode is fascinating as it shows how the TV series evolved from its origins as a radio series (which is also available in its own well-produced box set that includes video recordings of Lucas and Walliams performing the radio shows--I highly recommend this to fans of the TV series.) There's also a generous portion of "Little Britain" sketches performed for TV specials and charity events and a sampler of sketches from "Rock Profile," the Lucas-Walliams TV series that came just before "Little Britain," which I found underwhelming as it's mostly impersonations of British pop stars I've never heard of. I hope the much superior early Lucas and Walliams series "Mash and Peas" and "Sir Bernard's Stately Homes" get their own box set someday.

As for "Little Britain USA," I prefer to pretend it doesn't exist. I can understand Lucas and Walliams' urge to extend their enormously popular UK hit into the American market, but it was doomed precisely because "Little Britain" is such a specifically British confection that it just doesn't translate into the American idiom. But then when you have an iconic comedy series like this it can be hard to recreate in another context.
Read more
2 people found this helpful
Helpful
Report abuse

Jessica Trent
4.0 out of 5 stars Hilarious Show!
Reviewed in the United States on March 18, 2015
Verified Purchase
This was an excellent gift and it was so worth the money I spent! I love Little Britain and I showed it to my husband, and he loved it too! Unfortunately, they don't have all seasons and episodes on Netflix, so I had to get this complete collection (even though it doesn't have Little Britain U.S.A.). I loved the bonus features in this collection, it brought hours and hours of tearful, laughter!
The only thing that was odd about this collection is that, in my pack at least, the "live" and the "abroad" were switched, so the DVD that says "Little Britain Abroad" is really the "Little Britain Live," and vise versa. Other than this little hiccup, it was so worth the money and my husband and I absolutely love watching the hours of fun this collection gives you!
Read more
3 people found this helpful
Helpful
Report abuse
See all reviews

toshy
4.0 out of 5 stars Great Satire goes bad then goes good again
Reviewed in Canada on November 9, 2014
Verified Purchase
A lot of very funny, outrageous characters and humour in this box set. Had only seen Little Britain USA before, so great to see all those characters in their home environment. Though many characters (Vicky Pollard, Lou and Andy, the PM and Sebastien, Daffyd, Carol and Linnndaaa...) are original, sophisticated and deftly drawn, and the sketches they appear in over the 3 seasons constitute a "storyline" for them, I felt that by the middle of the second season and almost the entire 3rd, I was becoming weary of a quality of a school-boyishness in the humour. The "shock value" seemed to be based less in brilliant satire and come more from a desire to appeal to adolescent boys. The box is saved, however, by the excellent additional features which include a doc on the making of their tour, the tour itself, a brilliant sort of movie on LB Goes Abroad (which was as fresh and hilarious as the original first season and a half), and a wonderful surprise addition on one of the performer's extra-curricular activity during the filming of the tour. No spoilers, here, sorry. So, despite some disappointment with the series itself, there was a lot to recommend this collection, and it still seemed to be worth the money (on sale),
Read more
3 people found this helpful
Report abuse

Jessica Wright
5.0 out of 5 stars British Comedy at its finest
Reviewed in Canada on November 24, 2018
Verified Purchase
One of my favourite British comedy shows - if you love Moone Boy, IT Crowd, and Flight of the Conchords, then I highly recommend!
Read more
Report abuse
See all reviews