You have reached the cached page for https://www.dailymail.co.uk/tvshowbiz/article-6582473/Kristen-Stewart-shares-steamy-kiss-girlfriend-Sara-Dinkin-split-Stella-Maxwell.html
Below is a snapshot of the Web page as it appeared on 10/23/2021 (the last time our crawler visited it). This is the version of the page that was used for ranking your search results. The page may have changed since we last cached it. To see what might have changed (without the highlights), go to the current page.
You searched for: +kristen stewart girlfriend kiss We have highlighted matching words that appear in the page below.
Bing is not responsible for the content of this page.
Kristen Stewart shares steamy kiss with girlfriend Sara Dinkin ... after split from Stella Maxwell | Daily Mail Online

She ended things with her ex just one month ago.

Kristen Stewart was snapped sharing a steamy kiss with her new girlfriend while on a drive Thursday night in Los Angeles.

The 28-year-old and her lady love, Sara Dinkin, were on their way to take a workout class together when they stole a quick smooch. 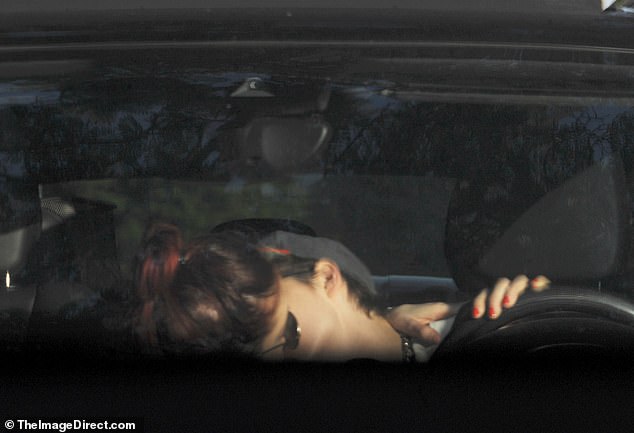 The pair were headed to a Brazilian Jiu Jitsu class in Hollywood when they were seen stopped at a traffic light.

Before the red light could turn green, the Twilight star leaned over to her passenger for a brief lip locking session.

The new lovebirds seemed to spend the entire day together as they were spotted earlier walking their dogs.

On both outings, Kristen sported a white sweatshirt along with white Adidas Swisstex Direct sweatpants and a baseball hat. 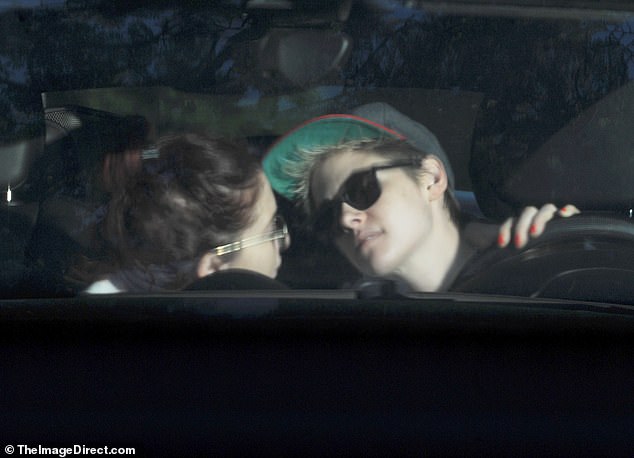 Moved on: Kristen broke up with her girlfriend of two years Stella Maxwell in December and has been getting very cozy with Dinkin

On her own: Later in the day Kristen went out solo

The Panic Room star broke up with her supermodel girlfriend Stella Maxwell in December after being together since 2016.

Maxwell is reportedly furious that Kristen has gone public with her new relationship. 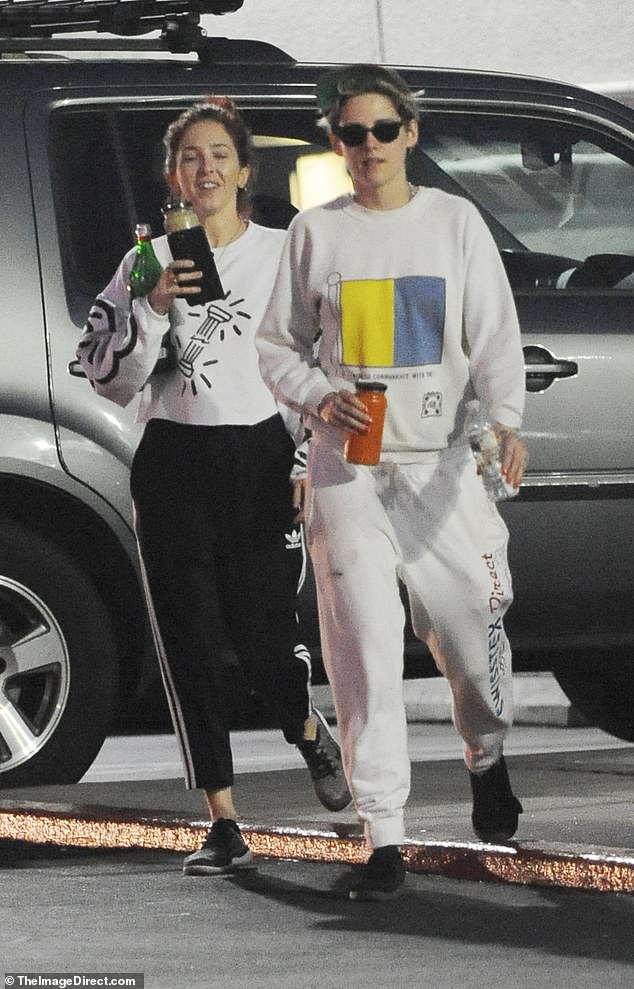 Fitness pals: The lovebirds were headed to a Brazilian Jiu Jitsu class in Hollywood when they passionately kissed at a traffic light

Gender bend in throwback sweats from adidas Originals like Kristen 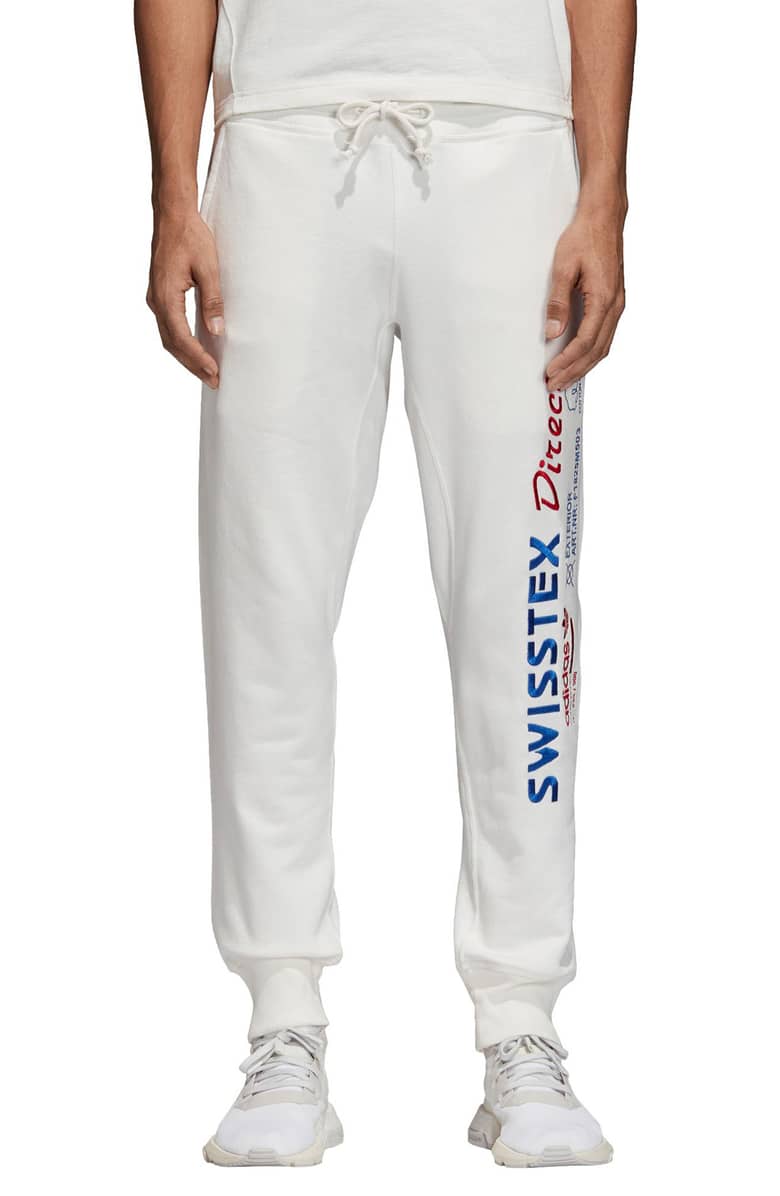 At this time of year we all want to just be warm and comfortable and little sounds more appealing than a pair of soft sweats. However, it can be hard to style a pair of sweatpants without looking sloppy, but showing us how it is done is Kristen Stewart.

Wearing a pair of men's Adidas 'Kaval' jogging bottoms, Kristen stepped out in style with her new girlfriend this week and we are loving her casual look.

The oversized and slouchy style keeps it cas, but, but the crisp white and Adidas slogan along the side keep this look fresh and on-trend. And we love an all white winter look!

You can pair these with an oversized sweater like Kristen has for a super casual day time look. Or why not step things up a notch and pair it with a crop top and puffer and some sock boots for a sexier, dressier, street style look that is so on-trend.

However you style these, we think that they are a must-have! You can shop them by clicking the image (right). Alternatively, recreate Kristen's look by shopping our edit below.

DailyMail.com may earn commission on sales from these product links
...NOW GET A PAIR LIKE KRISTEN'S

'They made a pact not to rub it in each other's faces by dating anyone else publicly for a while,' an insider told RadarOnline.

Adding: 'Kristen couldn't help herself and decided to go public with Sarah almost straight away,' the source said.

In the past week, Stewart has been spotted out with Dinkin several times.

Poor form: Stella Maxwell is reportedly furious that Kristen has gone public with her new relationship so soon after their split

Radar reported that Stella has 'been knocked sideways at how brutal Kristen's been.'

'The worst part is that they share a lot of mutual friends,' the revealed, 'all of whom are having to take sides because the girls won't speak to each other at all now.' 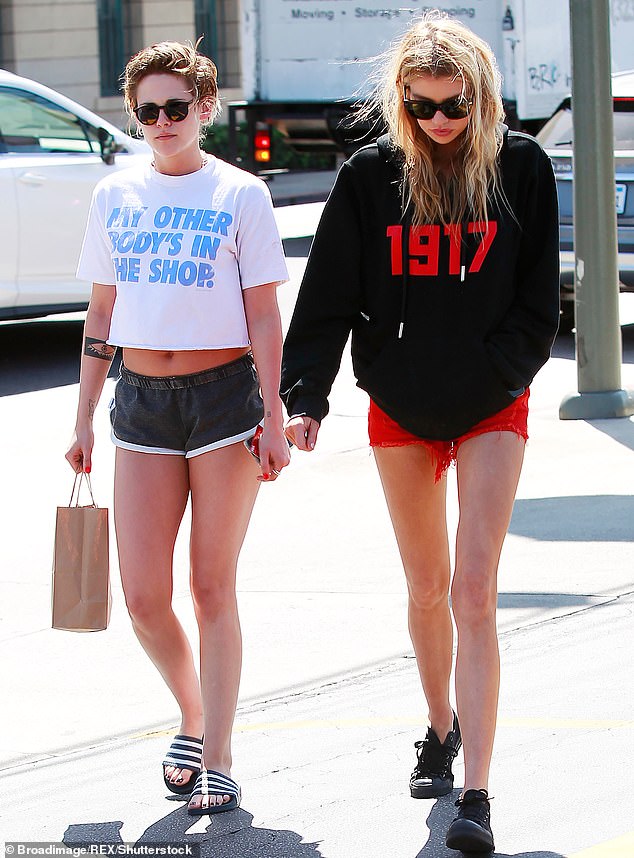 Before: Kristen and Stella (right) had been together since 2016

The pair took a break in 2012 when she had an affair with her Snow White And The Huntsman director Rupert Sanders, 47.

She dated her assistant Alicia Cargile on and off in 2015 before a brief relationship with French singer Soko, 33.

Kristen then romanced singer St. Vincent, 36, in 2016 for a few months before moving on to a relationship with Stella.