You have reached the cached page for https://www.dailymail.co.uk/news/article-4903614/Government-seeks-prison-time-Weiner-sexting-case.html
Below is a snapshot of the Web page as it appeared on 11/24/2021 (the last time our crawler visited it). This is the version of the page that was used for ranking your search results. The page may have changed since we last cached it. To see what might have changed (without the highlights), go to the current page.
You searched for: +joan lady of wales images and quotes about death of husband We have highlighted matching words that appear in the page below.
Bing is not responsible for the content of this page.
Teen-porn fiend Weiner asked girl, 15, to strip on Skype | Daily Mail Online

By Alana Goodman For Dailymail.com and Associated Press

Anthony Weiner must be jailed because he was obsessed by teen-themed pornography and convinced a 15-year-old girl to strip naked and touch himself for her on Skype and Snapchat, prosecutors said Wednesday.

The confirmation of the depths of his depravity came in a sentencing memorandum entered in court in Manhattan as prosecutors urged a federal judge to jail the pervert politician for 21 to 27 months.

Weiner’s sexting relationship with the underage girl was first revealed by DailyMail.com last September, and immediately prompted a federal investigation.

The former congressman has shown a 'dangerous level of denial' and 'lack of self-control' that could put other teenagers at risk, prosecutors said Wednesday.

'Although the defendant's self-destructive path from United States Congressman to felon is indisputably sad, his crime is serious and his demonstrated need for deterrence is real,' said the memo filed by prosecutors with the U.S. District Court for the Southern District of New York.

'The non-custodial sentence that Weiner proposes is simply inadequate; his crime deserves time in prison.'

The 11-page document comes days before Weiner is sentenced for sexting the girl, who has not been named but has agreed to have her face show.

The case led the FBI to reopen its probe into Hillary Clinton’s private email server after investigators found messages between Clinton and Weiner’s wife Huma Abedin on the former congressman’s laptop.

SCROLL DOWN FOR VIDEO 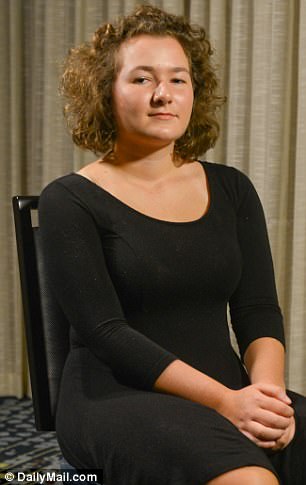 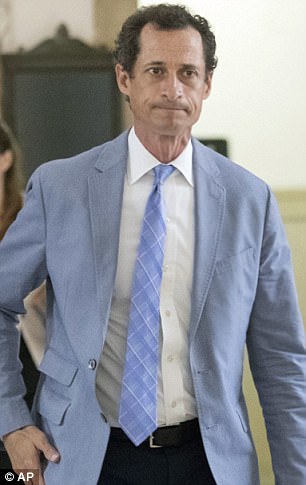 Pervert: Anthony Weiner wanted his victim to strip naked and touch herself on Skype despite knowing she was 15, federal prosecutors said in court documents 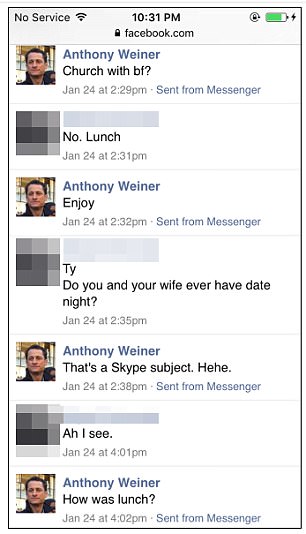 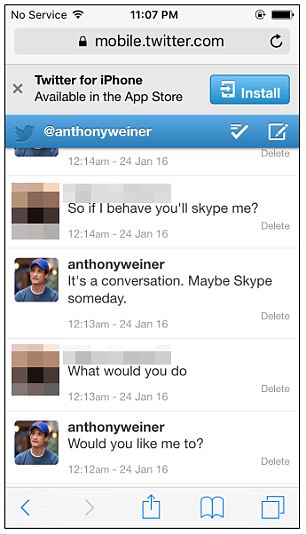 Grooming: Weiner was revealed to have Skyped twice with the teenager and asked her to strip naked and touch herself. She revealed the messages to DailyMail.com 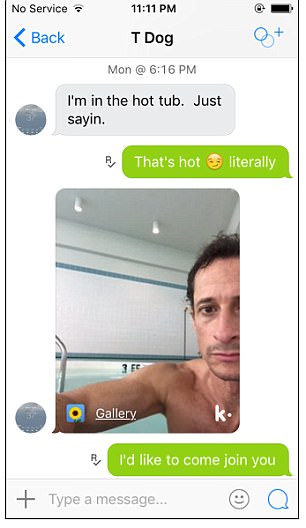 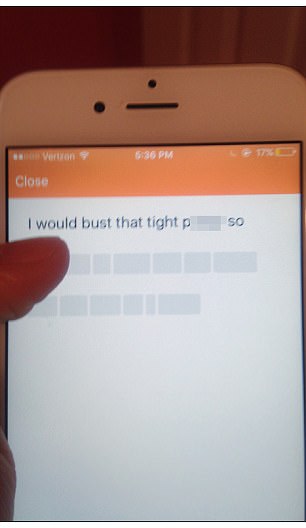 Horror revealed: Anthony Weiner sent his victim, 5, obscene images and messages about what he would do to her if she was 18 in messages revealed by DailyMail.com

A Manhattan judge is scheduled to sentence the New York Democrat on Monday for transferring obscene material to a minor.

The government urged the judge to put Weiner's claims of a therapeutic awakening in a context of a man who made similar claims after embarrassing, widely publicized interactions with adult women in the past.

'This is not merely a 'sexting' case,' prosecutors wrote. 'The defendant did far more than exchange typed words on a lifeless cellphone screen with a faceless stranger.

'With full knowledge that he was communicating with a real 15-year-old girl, the defendant asked her to engage in sexually explicit conduct via Skype and Snapchat, where her body was on display, and where she was asked to sexually perform for him.

'That offense – transmitting obscenity to a minor to induce her to engage in sexually explicit conduct by video chat and photo – is far from mere 'sexting'.

'Weiner's criminal conduct was very serious, and the sentence imposed should reflect that seriousness.'

The document reveals that Weiner 'has acknowledged an interest in legal, adult, teen-themed pornography'.

It said that his submission to the court that 'he deserves a lighter sentence because the Minor Victim's age meant nothing to him rings hollow'.

Weiner, 53, said in a submission last week that he's undergoing treatment and is profoundly sorry for subjecting the North Carolina high school student to what his lawyers called his 'deep sickness.'

Prosecutors attacked some of Weiner's arguments for seeking leniency and noted his full awareness that what he was doing was a crime, citing his co-sponsorship in January 2007 of a bill to require sex offenders to register their email and instant message addresses with the National Sex Offender Registry.

'While the government does not contend that Weiner engaged in inappropriate sexual exchanges with other minors or that he is a pedophile, his professed ambivalence toward the minor victim's age is belied by the defendant's own statements to the court-appointed evaluator during his evaluation,' they said.

Prosecutors said Weiner, who unsuccessfully ran for mayor in 2005 and 2013, acknowledged to the evaluator an interest in legal, adult, teen-themed pornography.

The government said Weiner's 'widely-reported prior scandals' were not criminal in nature and did not involve minors but should be considered at sentencing because they reveal a familiar pattern.

'He initially denied his conduct; he suffered personal and professional consequences; he publicly apologized and claimed reform.

Divorce: Weiner's sexting relationship with a minor has cost him his marriage to Huma Abedin, Hillary Clinton's closest aide, and the two are battling over custody of their son Jordan, five 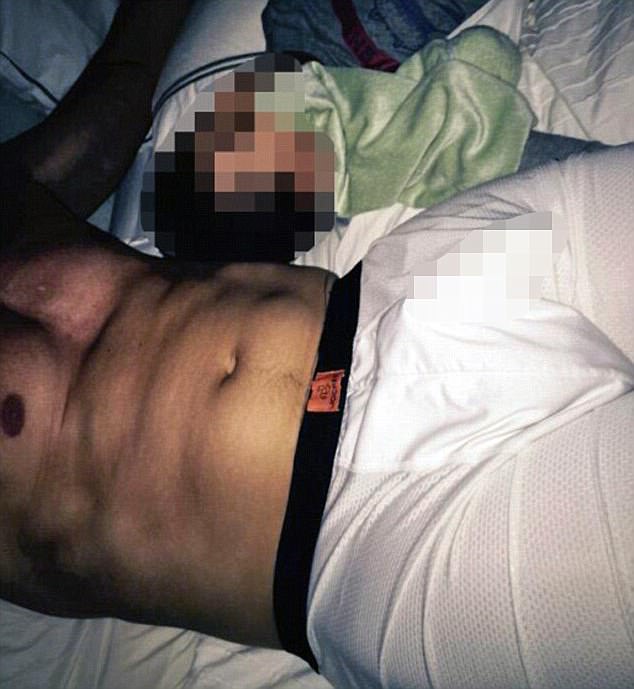 Tip of the iceberg: Weiner admits in court documents to sending sexts to hundreds of women since 2009 - with this one being revealed. He also spoke of his love for his son, who appeared in his sext.

They added: 'Weiner's demonstrated history of professed, yet failed, reform make it difficult to rely on his present claim of self-awareness and transformation.'

Defense lawyers had portrayed the girl as an aggressor, saying she wanted to generate material for a book and possibly influence the presidential election.

Prosecutors responded that Weiner should be sentenced for what he did, and the motives of the victim should not influence his punishment.

As part of a plea bargain, Weiner has agreed not to appeal any sentence between 21 and 27 months. Prosecutors said the sentence should fall within that span, and they noted that Probation Department authorities had recommended a 27-month prison term.

WEINER'S EXCUSES: I SEXTED BECAUSE I WAS DEDICATED TO MY CONSTITUENTS

Anthony Weiner's lawyers submitted more than 200 pages of documents in their bid to keep him out of prison.

They called his sexting an 'illness' and said it grew out of his dedication to his constituents as a congressman.

'By 2009, Anthony's national prominence had reached new heights... At the same time, smartphones and the proliferation of social media platforms had begun to transform users' connectivity and frequency of access to online communications.

'Anthony - who prided himself on being accessible to his constituents - moved quickly to capitalize on these new technologies, developing a strong presence on Facebook and Twitter, and responding to and engaging with members of the public who reached out to him.

'Anthony began to exchange texts and other messages with constituents and admirers alike. Some of the admirers were female, validating him not just as a politician, but as a man. It seemed harmless to Anthony...'

But last week his lawyers submitted a huge file calling for him to be spared jail.

It included claims that he has finally acknowledged the 'illness' which made him a serial sexter, and a plea from his wife, Huma Abedin, not to have their son hurt by his sentence.

He finally came clean about the extent and scale of his sexting habit - but came close to blaming his victim for the sexting scandal.

Weiner's attorneys said he continually sexted with women between 2009 and 2016 and did not take therapy seriously at the time, despite the destruction to his political career and his public claims that he was in treatment.

The scale of his sexting means that the images which have emerged - one of him in bed in a state of arousal with his son beside him - hardly qualify as even the tip of the iceberg.

It says his 'self-destructive compulsion' was driven by mental illness, including a 'mixed personality disorder' that was recently diagnosed by a therapist.

Weiner's memo also describes the 15-year-old girl as a manipulative fame-seeker – writing that she baited Weiner into exchanging sexual messages with her because she wanted to influence the U.S. presidential election.

In the 68-page memo, Weiner's legal team admits that in early 2016 the former congressman was exchanging thousands of messages a month with 'dozens' of women he met online, including at least 1,500 messages with one middle-aged woman over the course of just two months.

The scandal has been toxic not just for Weiner but for Abedin, who is now divorcing him and seeking custody of their son, Jordan, five.

It also set off a bombshell chain of events which led to Hillary Clinton - Abedin's boss - having her emails re-investigated by the FBI and the move announced just days before the election.

Clinton says the announcement of the new investigation, made by then FBI director James Comey, was one of the reasons she lost to Donald Trump.

But despite a mounting list of who she blames for her loss, she has never named Weiner as one of the reasons.

He had been a part of the Clinton camp until his first sexting disgrace. She suggested he date Abedin and her husband Bill married the couple - although no photograph of him performing the ceremony has ever been made public.