You have reached the cached page for https://www.lookandlearn.com/blog/21446/isabella-of-valois-the-youngest-queen-consort-of-england/
Below is a snapshot of the Web page as it appeared on 11/7/2020 (the last time our crawler visited it). This is the version of the page that was used for ranking your search results. The page may have changed since we last cached it. To see what might have changed (without the highlights), go to the current page.
You searched for: +isabella of valois We have highlighted matching words that appear in the page below.
Bing is not responsible for the content of this page.
Isabella of Valois, the youngest Queen Consort of England – Historical articles and illustrationsHistorical articles and illustrations | Look and Learn

Isabella of Valois, the youngest Queen Consort of England

Click on any image for details about licensing for commercial or personal use.

This edited article about Isabella of Valois originally appeared in Look and Learn issue number 121 published on 9 May 1964. 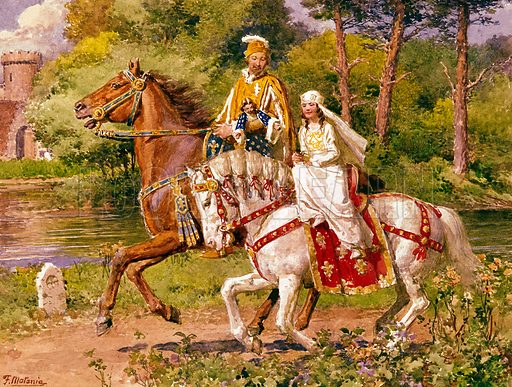 Richard II riding out with his six-year-old Queen, Isabella of Valois by Fortunino Matania

The reign of Isabella of Valois, the second wife of King Richard the Second, is unprecedented in the annals of England. One sentence of statistics sums up her incredible story.

All England was put in a dither when the thirty-year-old widower king announced that he intended to take as his second wife the child Isabella, daughter of King Charles the Sixth of France. It was not only Isabella’s age that bothered the people – her country was still England’s natural enemy, and the thought of a Princess of France on the English throne did not endear them to Richard, who was already thoroughly unpopular.

When Richard sent an English embassy of knights to France to arrange the marriage, six-year-old Isabella was supposed to have told them brightly:

“I shall be well pleased to be Queen of England, for I have been told that I shall then be a great lady.”

Isabella certainly became Queen. But she was one of the few Queens who never became a great lady.

At a great ceremony at St. Omer in France in October, 1396, Charles of France handed over his daughter to King Richard. The next month the king and the child were married at Calais. Then they set off for London, where such a crowd turned out to meet them that nine people were crushed to death on London Bridge.

As soon as the coronation was over Richard, who was always extremely kind to his child bride, sent her, so to speak, back to school. Most of her education she received at Windsor, and it is clear that when Richard visited her there regularly he so charmed little Isabella that she became very attached to him.

If Richard was happy in his strange domestic life, however, he was most unhappy with affairs of state. He had the Duke of Gloucester executed for plotting to seize the throne. By the time he returned from an expedition to quell a rebellion in Ireland, another nobleman, Henry Bolingbroke of the House of Lancaster, was leading an insurrection against him in England.

Henry met Richard at Flint Castle in Wales and took him to London as his prisoner. The insurgents had already taken over the custody of the little Queen and were busily shifting her from castle to castle, but at that moment they were more interested in deposing Richard. At Westminster the King was forced to hand over his crown to Bolingbroke, who then became King Henry the Fourth.

Isabella now was a prisoner of the State. When the news was conveyed to her father, the King of France, he went temporarily insane. And Richard’s fate as a deposed monarch was clearly sealed, for in the Middle Ages there could not be two kings around at the same time; one of them had to die. Accordingly, in the spirit of the times, Richard was murdered in his prison at Pontefract Castle.

It was exactly in the spirit of the times, too, that King Henry at once proposed that his heir, Henry of Monmouth, the Prince of Wales, should be Isabella’s next husband. This proposition was rejected with horror by the little widow; young as she was, Isabella was a resolute and decisive girl. Young Henry – the future King Henry the Fifth – who was a handsome enough Prince by any standards, was all for the match, and he, too, tried to persuade Isabella to marry him. But she would have none of it.

“She mourned her murdered husband in a manner exceedingly touching, as all who approached her bore witness,” says a chronicler. The fact remains that a girl of ten was defying the persuasive efforts of a powerful king and a handsome, determined Prince of Wales!

The use of force against Isabella was out of the question, for she was a child of France. In that country agitation now began for her immediate return. At first King Henry would not listen – Isabella, he said, would remain in England, where she would enjoy all the rights and privileges of a Queen dowager. At length, though, his council persuaded him that Isabella was scarcely worth the cost of keeping in luxury in England, and it would be cheaper to send her back. So off Isabella went, minus all her jewels, which the King decided she should leave behind to swell the royal treasury.

Soon after she arrived in France, Isabella’s uncle, Louis Duke of Orleans, sent off a letter to King Henry. In it was a challenge: Henry, said the French Duke, had murdered Isabella’s husband and stolen her fortune, and for this he must fight a duel. Coldly Henry rejected it; it would be beneath the dignity of a king, he replied, to fight a mere Duke. But he still gamely tried to negotiate a marriage between Isabella and his son.

Isabella did marry again, but not the Prince of Wales. Her second husband was Charles of Orleans, her cousin. She was twenty when she became a mother in September 1410, and a few hours later she died.

A strange twist of fate happened to Charles of Orleans, her husband, who fought for the French at Agincourt against King Henry the Fifth of England – the same Henry who as Prince of Wales had so unsuccessfully wooed Isabella. Charles was left for dead under a heap of slain, but was pulled out by an English squire and restored to life. Henry took him home to London with him – and there held him to ransom for twenty-three years.

Was it jealousy that made the King do that? If it was, little Isabella’s few brief years in this world certainly had an extraordinary effect on men in high places. . . .