You have reached the cached page for https://voxcantor.blogspot.com/2021/10/thomas-cardinal-collins-shuts-down.html
Below is a snapshot of the Web page as it appeared on 12/7/2021 (the last time our crawler visited it). This is the version of the page that was used for ranking your search results. The page may have changed since we last cached it. To see what might have changed (without the highlights), go to the current page.
You searched for: +is vatican city the holy city for catholics persecuted for christ images We have highlighted matching words that appear in the page below.
Bing is not responsible for the content of this page.
Vox Cantoris: Thomas Cardinal Collins shuts down social-media dissent whilst people lose their livelihood for the "common good!"

Thomas Cardinal Collins shuts down social-media dissent whilst people lose their livelihood for the "common good!"

It's a little hard to read but this was sent to me by a reader. In a video excerpt from a Mass at St. Michael's Cathedral, Collins spoke about the "Synod on Synodality" and how we should "listen to one another." How ironic that His Eminence has washed clean the social media criticism on the video of his throwing the flock under the bus of coercion and poverty due to the loss of employment over the injection. Collins tells us that "synodality" is from the Greek means to have a chat on the road together, only works in so far as he wants to chat about it.

I will post the link to this on the page. We'll see how long it is up.

You just can't make this stuff up.

"I am happy that you think it important to listen to all in the Church, especially any that feel marginalized and alienated. Have you listened to those of your flock who are now losing their jobs as a result of not wanting to inject experimental treatments that have been tested on fetal cell lines? I am feeling marginalized and alienated here in the Archdiocese of Toronto as our pusillanimous pastors and Communist Cardinal have sided with the Government against the people of Christ. We are sliding down a slippery slope of “papers please” parishes that have instituted your mandate of double shots for volunteers, employees and priests against the directive of the CDF; “At the same time, practical reasons make evident that vaccination is not, as a rule, a moral obligation and that, therefore, it must be voluntary.” Do you know that people who have taken the shots can catch and spread the virus? Why restrict only a certain segment of the faithful when both vaccinated and unvaccinated pole can catch and spread Covid?"

There is clearly something in the jab that causes those who have taken it to defy logic or a psychological prohibition to admitting it lest they admit that they were wrong.

Collins is wicked. His actions are directly allowing the City of Toronto, others and corporate fascists to terminate people and even to the Town of Oakville baring the unjabbed from marriages, a fundamental right of every man and woman by their very existence.

Email ThisBlogThis!Share to TwitterShare to FacebookShare to Pinterest
Posted by Vox Cantoris at Wednesday, October 13, 2021

“Synodalaty” = protestantism = humanism, no matter how ya slice it.

We all remember when JPII went to Poland during the Solidarity movement and told the Poles to get back to work and quit yammering about freedom. When that decisive moment arrived in human history, and the people looked to the church for help, and the pope told them to "pipe down and remember the government loves you and is only interested in your welfare", and furthermore, JPII told them, within the church itself all volunteers and employees would be fired by the CHURCH, if they did not capitulate to the state despite their religious, moral, or medical objections. Remember when he said those immortal words "It's about public safety" when the people lost their jobs and income and were treated as second class citizens? Or what about when he calmed their pain over being abandoned by the Church when he said "We're all in this together!", as he retired to his comfortable home provided by the people's money, who were now in the hellish situation of being punished by their ow government AND their own church. The same church their ancestors belonged to forever, the one they had given time, talent, and money to support.

The trust destroyed, when can it be restored. The people turn to the church, the churchmen, for sanity, for hope, for encouragement, for an advocate, and they are not only turned away, they are told to submit, as the church has submitted. The burden placed on the people, has been added to by the churchmen. They find no advocate there! The church does not care if the people lose their jobs! The church no longer cares about cooperation with evil! Go ahead, cooperate, the church tell us, and splits hairs about what is moral and what is evil. Submit to tyranny! The government is your friend, the churchmen tell us. This is your moral responsibility (regardless of your personal conditions), don't be SELFISH, they hiss.
What has been lost here, is beyond measure.
It is trust BROKEN. If enough Catholics figure this out, and act accordingly, there are perhaps many who will smile to one day see the churchmen standing behind them in the bread lines. They have chosen comfort for themselves, abandoned the flock, but their days of comfort will not last forever.

The administrator of that YouTube video if hiding comments. This means only the commenter sees their own comment (it is not visible to the public). If you log out of your account and open that video again, the comment is no longer visible. This feature is probably intended as a way to deal with abuse, but it is clearly being used in a cowardly (not to mention hypocritical) way.

When we next have a Catholic Pope his first encyclical should be on the proper understanding of "obedience". One of the unintended consequences of Vatican I was papolatry, or ultramontanism. These tendencies have the effect of causing one to abandon reason, intellect and proper discernment.

There was a time when His Eminence took a stand (sort of) against the errors coming out of one of the synods on the family. Now he's just another FrancisCardinal.

To Phineas... there will not be ANOTHER POPE... in that church of ours, which you experience now. Benedict XVI was the: "Last True Pope"!!! Next one will be known in so-called prophetic language as the "Angelic Pope" - who will be a head on new, different Catholic Church; the one after the schisms, after persecution, maybe even he will fighting with the antichrist's false one world church (a Bergoglio's "baby"). People, who know prophecies, has less problems and less suffering with recognizing the times we leave in. Chaos and shaking in Church is coming in even more intense waves - this is an end of this epoch in the history of our Catholic Church. After the martyrdom of pope Benedict XVI (III secret of Fatima)... we will not have a true pope for about 3 years... Do not be shock when our synodal cardinals will offer the Seat of Peter into the hands of antichrist - because this is exactly the plan: https://fatherofloveandmercy.wordpress.com/2014/09/07/the-antichrist-will-take-up-position-because-he-will-be-invited-to-do-so/

St. Malachy did say I think, Benedict was the last pope? The pictures on the Vatican walls, did the space did run out after Benedict, and was he the last pope mentioned? Then, "Peter the Roman". Bergoglio's family was from Italy.

Collins and all his dirty church people (they are not priest to me) are so disgusting and deceitful. They are responsible for this white elephant of a church that we have become. They just preach history, geography and very intelectual things to the poor, old immigrants who sit at that Cathedral to listen to their self-centered talk. The clock is ticking and we all know the end of this. The Lord will come back.

NO MASS FOR YOU! 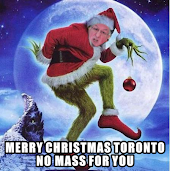 Click on the Grinch for all No Mass for You posts

"I do not want ever to shut down the Church again."  So said, Toronto Archbishop Thomas Cardinal Collins on November 13, 2020 on... 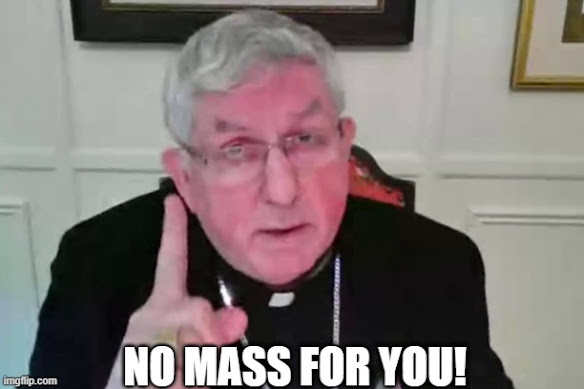 "...the great movement of apostasy being organized in every country for the establishment of a One-World Church which shall have neither dogmas, nor hierarchy, neither discipline for the mind, nor curb for the passions, and which, under the pretext of freedom and human dignity, would bring back to the world (if such a Church could overcome) the reign of legalized cunning and force, and the oppression of the weak, and of all those who toil and suffer. [...] Indeed, the true friends of the people are neither revolutionaries, nor innovators: they are traditionalists."