You have reached the cached page for https://whitetailinstitute.blogspot.com/2012/05/3-management-practices-to-create-rut.html
Below is a snapshot of the Web page as it appeared on 12/16/2021 (the last time our crawler visited it). This is the version of the page that was used for ranking your search results. The page may have changed since we last cached it. To see what might have changed (without the highlights), go to the current page.
You searched for: +is it ok to keep a buck in a rut meaning We have highlighted matching words that appear in the page below.
Bing is not responsible for the content of this page.
Whitetail Institute: 3 Management Practices to Create a Rut Hunting Paradise 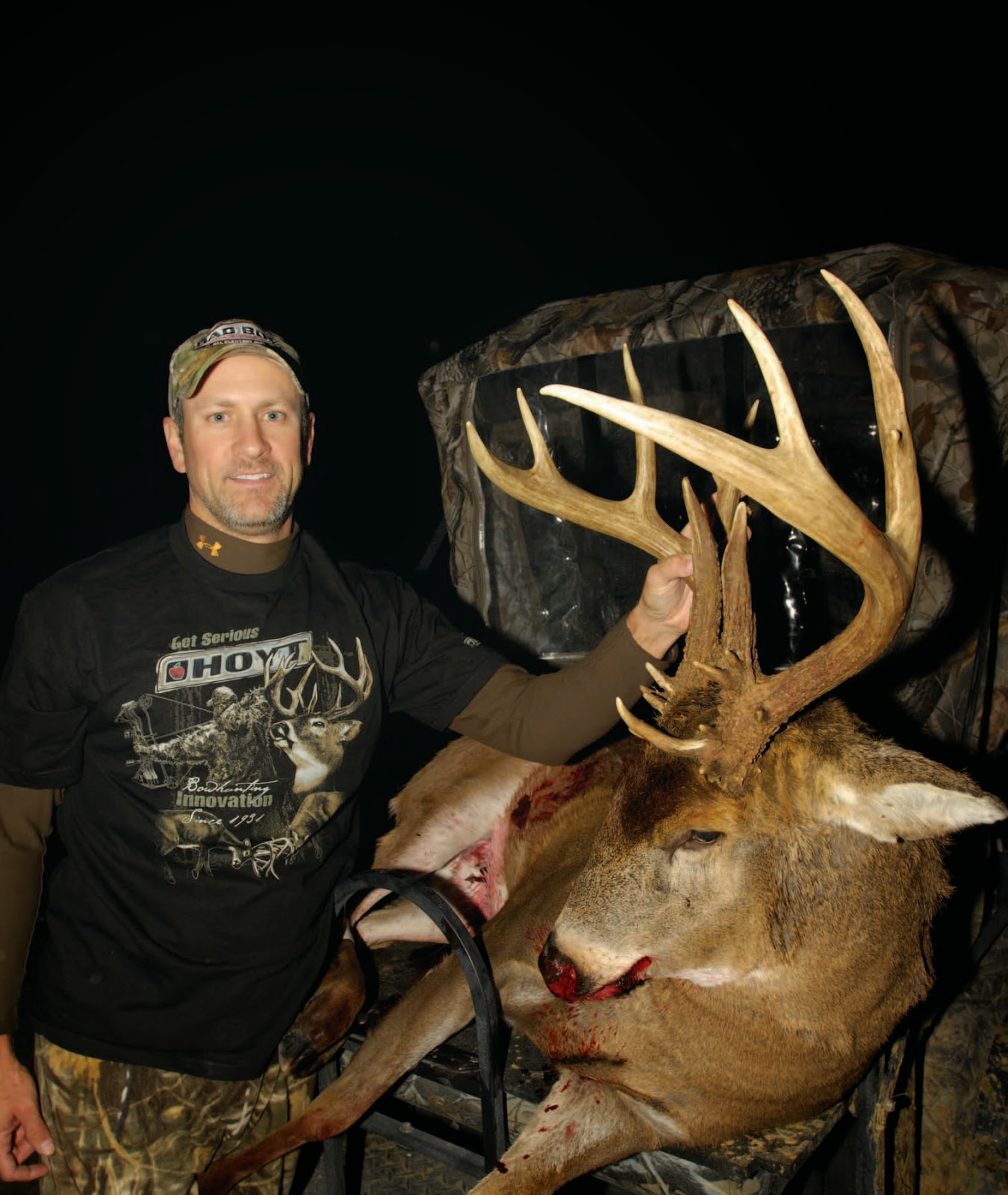 During the rut, the best strategy is to hunt does and let the bucks come to you. Does will be where the food is. That means you need to have a few lush food sources to attract and hold does during the early phases of the rut. You also need to create thick cover where the mature bucks can live in security and where they will come hunting for bedded does during the rut.
It's the middle of the rut as I write this. Don’t ask me why I agreed to write an article that was due in early November, but I was weak and probably hungry at the time and thought the income might be useful. The point is not the mismanagement of my hunting time but rather the correct management of a hunting property to produce the best possible action during the rut.

I have seen many mature bucks so far this season, not many of which have had big antlers. Still, it has been encouraging to see so many old bucks. I have shot a couple of the nicer ones, so it has been a great rut, all in all. Now I ask myself which of the management practices used on this property have had the most impact in producing this action-packed season.

I can come up with three. First, there is a lot of food on the place. Second, I have produced an abundance of thick cover. Third, we have kept the doe numbers down so bucks have to hunt for them, meaning less chance for a mid-rut lull. I’ll take these three factors one at a time to explain why they are important.

The management formula to produce rut success isn’t really all that different from the formula that will produce success at other times. You need lots of mature bucks and a reason for them to move during the day. Food, thick cover and buck-to-doe ratios all come into play to make this happen during the rut. OK, here we go.

First, let’s look at food. We know that deer are slaves to their stomachs. We also know that bucks look for does during the rut. So to have the best chance of seeing cruising bucks, we need to anchor the does on the property and keep them from drifting off to the neighbors each evening to feed. Yes, it is much cheaper if you can get the neighbor to feed your deer for you, but then you lose control of them, and your hunting suffers. So, as a minimum, you need to provide several well-spaced food sources that will anchor your does, thus producing several hubs in the travel patterns of your local bucks. 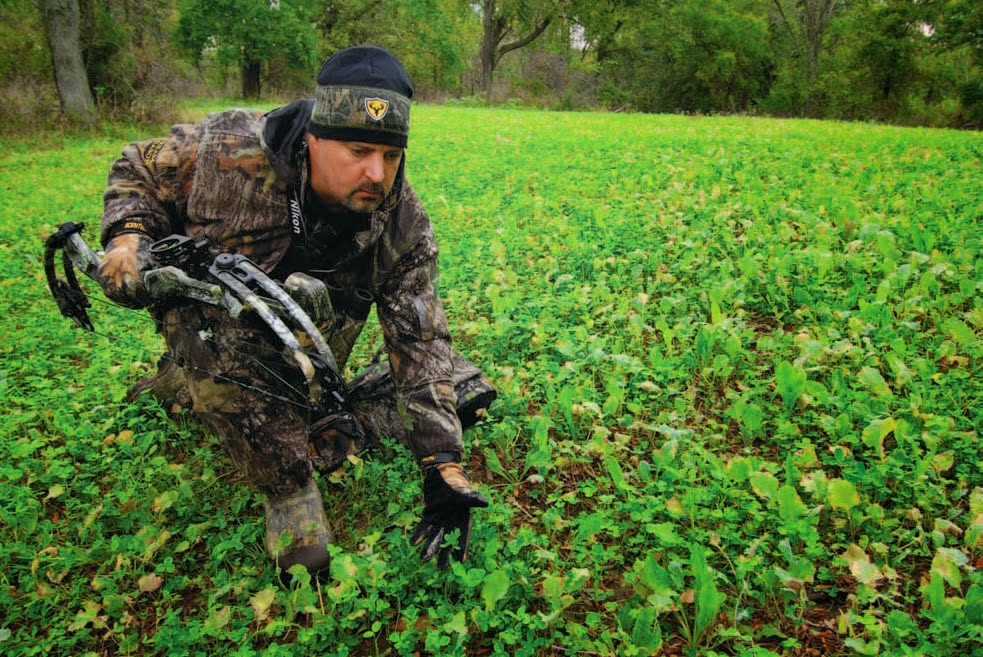 The best food plots for hunting during the rut are small ones tucked into the cover. The big plots do a great job of feeding the deer and keeping them healthy, but the hunting opportunities they offer during the rut are not nearly as great as those offered by the small plots. This is because the small plots become more than just feeding areas; they become community areas, places that concentrate deer and draw cruising bucks. The bucks come to these places to sniff around scrapes, stand and stare for long minutes and then swagger on through. I don’t see that kind of behavior around the big fields with nearly the consistency that I see it on these small, half-acre to three-acre plots tucked into the timber.

These small plots become excellent morning stand locations. In fact, they are just as good in the morning as they are in the afternoon — possibly better. Being isolated back in the cover, they are close to bedding areas, meaning they are the first place a buck will check in the evening and the last place he’ll check in the morning, increasing the odds you will see him on his feet during daylight. Again, I don’t see this on the larger fields. Small isolated food plots are one very important key to rut-hunting success. If you don’t have them, look for places to create them. Ideally, you will situate these fields on ridge tops so the wind will be predictable. These spots are killers.

Next, I will point out the advantages of thick cover. I remember 13 years ago when the reality of managing mature bucks first came to roost on (and took a dump on) my overly optimistic expectations. I was managing a property that I partly owned. I wanted to know how many big bucks the property could possibly hold. So I called several of the most respected deer thinkers in my Rolodex.

Their words were depressing. One of the guys I called was the deer biologist for the state of Illinois at that time. His answer echoed that of all the others. If you can hold one super-dominant, fully mature buck per square mile, you are doing about average. Ugh. I could only imagine all the trees that I would be sitting in each year that this one buck didn’t walk past. My hopes of even seeing him were squashed.

Fortunately, they were wrong. That answer has evolved and changed through time. Now, I am convinced, based on my own experiences and those of others who are working hard to maximize the potential of their hunting land, that the number is much larger. OK, I don’t have scientific data to back this up, but I believe that having super thick cover is an important key in holding more mature bucks on your land. Think about it from the standpoint of known deer behavior. When mature bucks are staring at each other all day, they are destined to decide who controls the turf with a war. If they can’t see each other, the war is much less likely to occur, and the turf gets divided up into smaller parcels by default.

One of my trusted contacts, Al Collins of northern Indiana, is a hard-core land manager and developer of hunting land. Collins believes that he is holding a mature buck for every 40 acres. That is a staggering number, but Al designs these farms to be super thick with fast-growing bushy vegetation replacing much of the open ground. He attributes his buck-holding capability to this thick cover.

That has been my experience, too. Starting six years ago, we began an aggressive timber stand improvement project on the farm. We have worked our way through nearly all the timbered cover during the five years that ensued, removing all the junk trees and those of non-commercial value. We cut down thousands of trees! So now, I can watch the forest regenerate at various stages. I have definitely learned a lot about what happens when you let daylight into different types of cover. It is interesting to see how thick some of these areas have become that we released six years ago – and how quickly the habitat changes when you release the right types of undergrowth. You can place a tree stand along the edge of some of these areas and barely be able to see into them, even though you are looking into them from above.

As mentioned, there are many mature bucks on the farm, and I attribute a good bit of that to this thick cover. It might even be possible we are holding one mature buck per 40 acres, just like Collins claims on his northern Indiana property. I never would have believed it five years ago. The place has really changed. 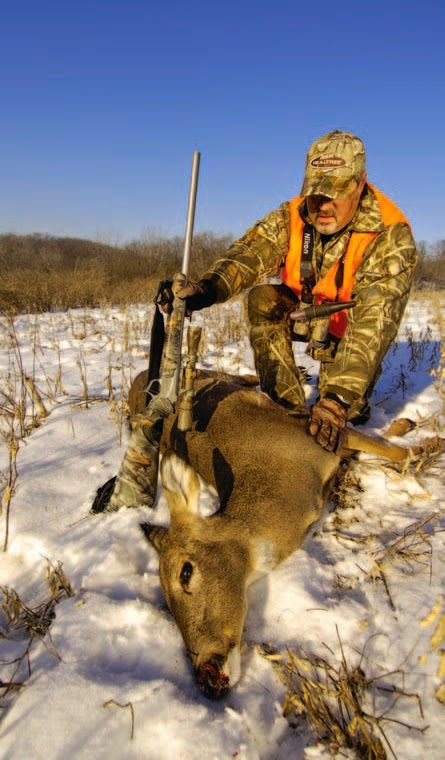 Now we just need a reason for those mature bucks to move during daylight. Let’s take a look at what motivates them during the rut, but I guess that is pretty obvious, isn’t it? So if they have to hunt for does, rather than just laying around and waiting for them to walk past, it would seem to make sense that they will be on their feet more during daylight. My experiences bear that assumption out.

By aggressively harvesting does, you help yourself on two levels. First, you make the bucks look harder during the rut. Second, you reduce the overall deer numbers, which makes it easier to establish thick cover.

You definitely need to do everything in balance. If you are managing in an area with limited deer numbers, you might not need to shoot as many does to make this work. However, if the buck-to-doe ratio is way out of whack, you can have an impact even on a small-scale project by shooting lots of does. By shooting does, you create a vacuum in the deer herd, and nature abhors a vacuum. Because does are more territorial and less likely to disperse than bucks, the vacuum tends to fill with bucks. Again, every situation is different so I offer the same disclaimer again — your mileage may vary. You might need to tweak this master plan to make it fit within the herd dynamics in your hunting area.

But, that disclaimer aside, there remains no question in my mind that you will increase the daylight activity of your mature bucks if you have fewer does.

Everyone asks me the question, “Won’t all your bucks leave during the rut?” First, every buck has his own personality. Some are wanderers, and some are homebodies, so it's impossible to generalize. However, just keep in mind that they don’t know what we know. Unless they have been there during the rut in the past, they don’t know that there is a place a mile away where there are more does. Yes, by reducing the doe numbers, you will also be increasing the buck movement on your immediate neighbor’s farm too, but that is life. Get over it. Short of erecting a high fence, it is impossible to improve your farm and your hunting without also improving your neighbor’s farm and hunting.

Deciding how many does to shoot is a challenge and it is definitely a moving target. I have my own thoughts on that, but I tend to fall on the aggressive side. I believe that you can always let them come back more easily than you can reduce them if you fail to take strong action. In other words, we might have shot too many over the years, but that will be easy to fix if it indeed proves true. We can just stop shooting them for a year — that’s the easy part.

Now you know what I know. That and 25 cents will get you a cup of coffee down at Wal-Mart. Hopefully this has at least gotten you thinking. Default management — doing nothing — will produce some success. However, being proactive and taking all the steps to turn your property into a rut hunting paradise will definitely pay greater dividends. Keep it simple. Hold as many mature bucks as possible and get them to move as much as possible. That is the simple formula for rut hunting action.