You have reached the cached page for https://the4thofficial.net/2017/08/manchester-united-linked-experienced-serie-defender-jose-not-happy-current-squad/
Below is a snapshot of the Web page as it appeared on 10/2/2021 (the last time our crawler visited it). This is the version of the page that was used for ranking your search results. The page may have changed since we last cached it. To see what might have changed (without the highlights), go to the current page.
You searched for: +is ezequiel garay good We have highlighted matching words that appear in the page below.
Bing is not responsible for the content of this page.
Manchester United Linked With Experienced Serie A Defender: Jose Not Happy With Current Squad? - The 4th Official

Manchester United have made the perfect start to their Premier League campaign this season as they have taken maximum points from their first two games, keeping two clean sheets. Jose Mourinho will be happy with the way things are going on at the moment but is still looking for players who can improve the squad before the deadline day.

This has seen him scout for some exciting stars for particular positions at the club and one player now extensively linked with a move to Old Trafford is Ezequiel Garay.

According to Spanish news-site SuperDeporte, Manchester United had a couple of senior scouts in attendance in a recent game in Spain to keep an eye on the 30-year old for a move this summer. Tottenham Hotspur, Juventus and Benfica are other clubs interested in the player but is he an option for United?

Born and brought up in Rosario, Argentina, Garay is a product of one of the most famous academies in world football at Newell’s Old Boys, where he made his senior debut in 2004. He made a name for himself at Racing Santander which earned him a move to Real Madrid, where he spent three long seasons, making just 31 league appearances. 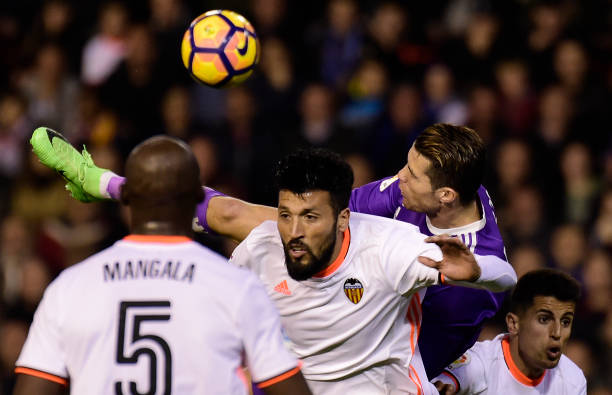 He spent stints at Benfica and Zenit before moving back to the La Liga in 2016 with Valencia and has shown great form and composure at the back, making 27 appearances last season as the first choice defender for the Spanish side.

A centre back by trait, Garay is a decent player in possession of the ball as he can dribble past opponents, find the right pass or hold on to the ball with ease, even in dangerous areas. He is, at times, a liability in the air but his understanding of the game allows him to pick up important positions to keep his goal away from danger.

He can also score free-kicks, showing his technical ability and is a player who belongs at the highest level. He has played in five different top flight leagues in Europe, for some of the best teams, and is one of the most experienced defenders on show at the moment.

At 30, he has 32 international caps, more than 200 top flight league appearances and 35 Champions League appearances, making him an established player at the highest level.

Mourinho spent on Victor Lindelof this summer but does not trust him yet in the first team. This leaves Phil Jones and Chris Smalling as options to partner Eric Bailly at the back and Garay is an upgrade on both those names. He will also not cost too much to lure out of Spain but is he a man United need at the moment?

Aakarsh Bommakanti
Was diving around lush green grass not so long ago but my keyboard is all I have now. An avid observer of detail in sports with a passion to make myself heard. Can find me playing on a field if not in front of my screen.

Was diving around lush green grass not so long ago but my keyboard is all I have now. An avid observer of detail in sports with a passion to make myself heard. Can find me playing on a field if not in front of my screen.